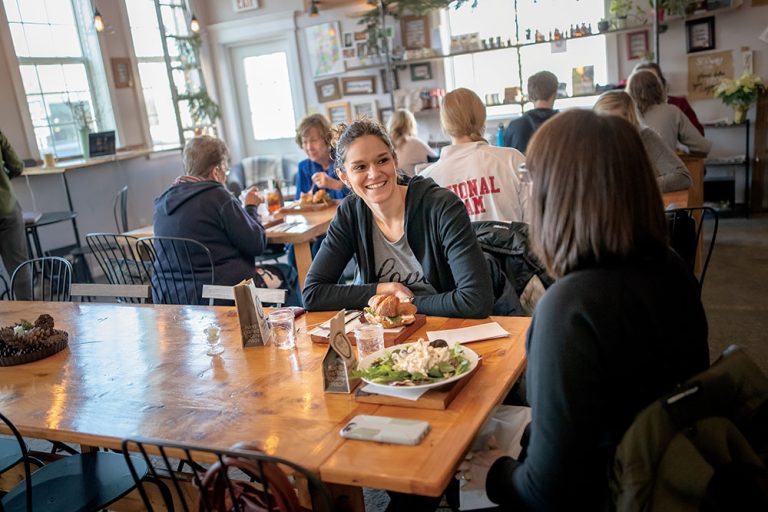 A good coffee shop swirls together with its neighborhood as smoothly as cream and sugar in a latte. It is a place where both jean-clad college students and suit-wearing business executives can comfortably gather. It serves as an ideal meeting place for old friends, new couples, and parents with small children.

“Coffee is an affordable product that most people like,” says Ben Orcutt, co-owner of Jackrabbit Coffee in Anderson. “So a coffee shop is a great place outside of work and home where you can regularly spend some time.”

Indeed, a coffee shop that gets it right can become a preferred “third place” — one of those havens outside of home (first) and work (second) where people find satisfying social time. In that spirit, here are three coffee shops giving a caffeinated kick to livability in East Central Indiana.

Catherine Kerton-Johnson has done plenty of traveling in her life, from her native South Africa to her current Indiana home. And wherever she goes, one of the first places she visits is the local coffee shop.

“That’s the ideal place to get a sense of what’s going on in the city, because it provides a space for the full range of the population,” Kerton-Johnson says.

Since 2015, Kerton-Johnson has been providing that type of space at The Bridge Café, a combination coffee shop and deli with a global influence in the food and drinks. There is a physical bridge just down the street, but Kerton-Johnson says the name truly refers to the café being used to “bridge the gaps in the community.”

“I didn’t want this to be just another place where a small tribe of like-minded people got together,” she says. “I want it to be accessible to all the people of the community.”

When Frank and Lauren Reber got married, they decided the best way to settle down was to start a business together. The problem was, they weren’t entirely certain what type of business. The Rebers eventually determined that opening a coffee shop would best demonstrate their commitment to Muncie.

“A well-run, quality coffee shop provides far more services to the community than simply caffeinating the masses. They also act as beacons of culture and commerce,” Frank Reber says. “You’ll be hard pressed to find a thriving downtown community that exists without a good coffee shop or two.”

The Caffeinery has been that type of place since 2014 and has become a hot spot for both Muncie residents and students at nearby Ball State University. Customers come for the coffee and stay for the camaraderie.

“We work to provide our community with the best possible quality products and service available,” Reber says. “By constantly improving and investing in ourselves, the community benefits.”

The original location of Jackrabbit Coffee was about as basic as it comes: coffee from the counter of a bicycle shop. In fact, Jackrabbit actually was nothing more than an espresso machine serving the customers of Buckskin Bikes.

During store renovations, owners removed the machine from the counter and put on a cart that was towed behind an old bicycle. The brew proved to be so popular that co-owner Ben Orcutt began taking his makeshift coffee cart and selling it at the local farmers market. Then in 2017, Jackrabbit Coffee opened in a brick-and-mortar location next to Buckskin Bikes.

All the syrups for the drinks are made in-house, including the popular vanilla and hazelnut. Special summer offerings include lavender for an iced tea. The shop also offers fresh baked goods including a selection of tarts.

“We’ve created an intersection point between residents in our neighborhood and people who are just driving in to get a cup of coffee,” Orcutt says. “It’s a step in helping to grow this neighborhood.” 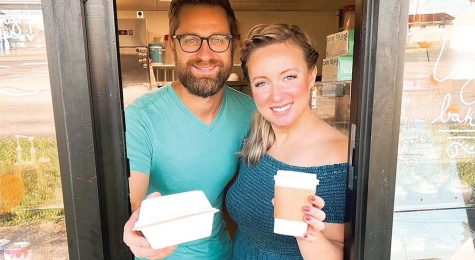