Looking for a tight-knit community with great schools, awesome food and gorgeous green spaces? You need to check out Lawrence, Kansas. 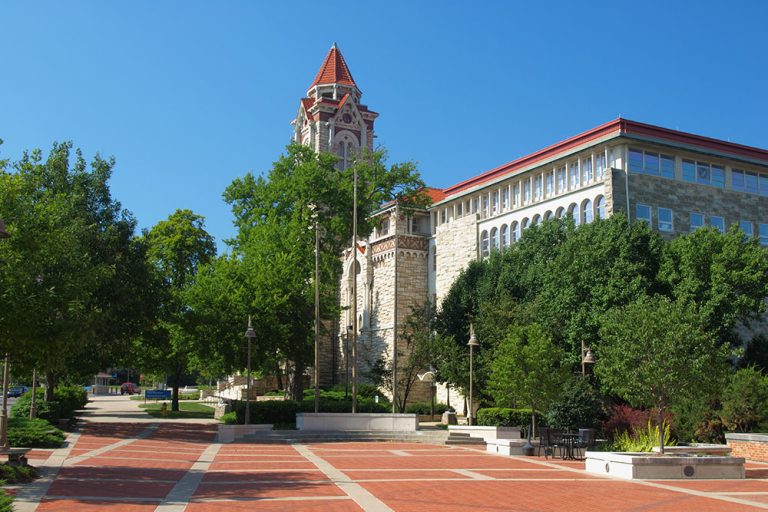 Situated less than an hour west of the Kansas City metro area, Lawrence, KS, is a welcoming community with a thriving historic downtown and winning college basketball team. Ample opportunities for learning, playing and enjoying good food and drink make it place where students, families and retirees are all living the good life – at affordable Midwestern prices.

Here are six reasons to consider making this oasis on the plains – and one of Livability’s Top 100 Best Places to Live – your new home.

A post shared by Lawrence Farmers Market (@lawrencefarmersmarket) on Sep 11, 2018 at 3:43pm PDT

The Midwest has a strong farming tradition, and the Lawrence area is teeming with small farms that supply local restaurants and supermarkets with everything from sustainably raised meat and vegetables to goat cheese and fresh flowers. On Saturday mornings from April through October, folks can head to the Lawrence Farmers Market to buy locally produced goods directly from farmers, and then enjoy freshly made breakfast items, baked goods and even locally brewed kombucha. If you sleep in on Saturdays, The Merc-Co-op, Lawrence’s long-standing cooperatively owned grocery store, sells a huge variety of locally grown and produced items any day of the week.

On the first weekend of October, more than 30 local farms open up to the public as part of the annual Kaw Valley Farm Tour, giving community members a first-hand look at where their local products come from.

2. The Schools Are Thriving

Lawrence values its public schools and has invested in them accordingly. In 2013, voters approved a $92.5 million bond that brought significant upgrades to its 14 elementary buildings. In 2018, voters passed an additional $87 million bond that will upgrade Lawrence’s two high schools and four middle schools.

In addition to its strong public schools, Lawrence has one Montessori, one Waldorf and two Catholic private schools that offer early childhood through middle school. There is also a private Episcopal college prep school for 6-12 graders.

3. You Can Bike or Walk Around the Most of the City (and Beyond)

Hitting the trails is a popular activity in Lawrence and over the past several years, the city, with the support of vocal citizens, has been developing the Lawrence Loop, a continuous 22-mile paved trail around the city limits. Only about five miles remain before the loop is complete.

Mountain bikers looking for more technical trails can head to the 9-mile Lawrence River Trail in North Lawrence, or the more than 13 miles of trails on the North Shore of Clinton Lake. The Baker Wetlands and Discovery Center has 11 miles of walking trails where visitors are all but guaranteed to see a variety of birds, reptiles, butterflies and other wildlife.

4. The Library Is Poppin’

With the University of Kansas as its central anchor, Lawrence is full of folks who are constantly reading, learning and discussing ideas, but the university cannot take all the credit for Lawrence being a haven for the intellectually curious.

The award-winning Lawrence Public Library, which is housed in a recently constructed, architecturally innovative modern building, offers welcoming spaces and engaging events for people of all ages. On any given day, you will find middle schoolers hanging out in the library’s Teen Zone, musicians making use of the Sound + Vision Studio, and book clubs and symposiums discussing everything from social justice to gardening with native plants. The library also hosts multiple book sales a year that make it easy to fill your bookshelf for just a few dollars.

Why Lawrence, KS, Is a Best Place to Live

Lawrence’s monthly Final Friday events, which feature dozens of art openings and live performances throughout town, are a great way to get to know the Lawrence art scene, but Lawrence also offers plenty of ways to nurture your own artistic proclivities.

The Lawrence Arts Center has classes for all ages in both the visual and performing arts, and aspiring thespians can audition for multiple community theater productions at both the Lawrence Arts Center and Theater Lawrence throughout the year. The annual Art Tougeau Parade is open to anyone who wants trick out their vehicle, bike or wagon, and some choose to create an original moving artistic contraption of their own.

A post shared by Lawrence Beer Company (@lawrencebeercompany) on Mar 9, 2019 at 6:55pm PST

6. Last (But Not Least) – There is Plenty of Beer and Coffee

Let’s face it, breweries and coffee shops are the heart and soul of any happening community, and Lawrence delivers on both fronts.

The main game in town for a rotating selection of consistently top-notch microbrews is Free State Brewery. Fun fact: when this downtown brewery opened 30 years ago, it was the first legal brewery to operate in Kansas since the prohibition era. The Lawrence Beer Company, located just east of downtown in the East Lawrence arts district is also a solid bet. The newest spot in town that’s quickly developed a loyal following is Black Stag Brewery, located conveniently across the street from Free State Brewery.

With dozens of coffee shops to choose from, you will never need to travel far in Lawrence for a caffeine fix. Alchemy Coffee and Bake House is a great downtown spot for a smooth pour-over. Decade, located in East Lawrence, and 1900 Barker, which is housed in a former neighborhood laundry mat, are two out-of-the-way favorites with inviting atmospheres and delicious offerings.