Glasgow, KY's Arts Guild of the Barrens and new 212 On the Main gallery inspires the community, and along with independent artists like woodworker Leo Esters, proves artists can thrive in the area.

By Stephanie Stewart-Howard on January 23, 2014 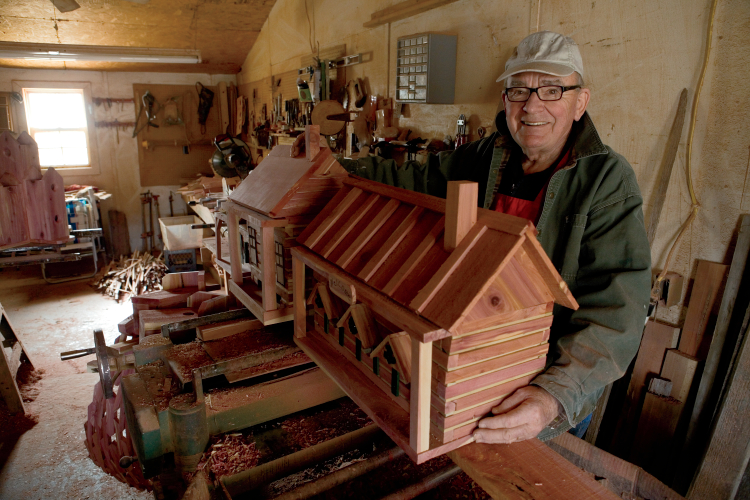 It doesn’t take a big city to inspire local arts and crafts, as Barren County has proved. The Arts Guild of the Barrens and its new gallery, 212 On The Main, underscore the area’s diversity of talents, while the work of craftspeople like Leo Esters demonstrates the opportunities for independent talents.

The Arts Guild and 212 On the Main

The Arts Guild got its start in 2005, created by Ann Stewart, tourism director for the chamber, and Betty Brogan, chair of its art committee. They began by hanging original works at the chamber office. In 2009, they established formally as the Arts Guild, and by 2012 they began showing works in the local library and the Fine Arts Bistro downtown. When the bistro was transformed into a cupcake shop, local businessman Larry Jewell leased the guild two spaces in a nearby building. They brainstormed, renovated, and in September 2013 opened the doors of 212 On the Main gallery.

“The gallery was very much needed,” says painter Sally Puntel, known for her horse and animal-themed works. “Glasgow was known as a sleepy, farming community, and this really broadened the county’s horizons. So many people come in, take time to look, and while it’s great to sell, it’s also wonderful to hear ‘Oh, I really like that!’ as people, especially children, look around and experience it.”

212 On the Main offers classes, including pottery and watercolor, for children and adults. Guild members have opportunities to display their artwork in the gallery and make sales. The artists are juried. Members donate half a day monthly to work in the gallery. In addition to selling paintings, prints and drawings, the gallery offers pottery, fine woodwork, jewelry and fiber arts that Brogan, a watercolor artist herself, says are high quality and very original.

“Everyone is so enthusiastic,” Brogan says. “It’s not hard to get them to volunteer time, and we have a volunteer gallery manager each month.”

Outside the gallery world, Cave City woodworker Leo Esters began building red cedar bird houses 20 years ago, selling them from his front yard on Highway 70. Friends asked for other things: wheelbarrows, cedar chests, swings and tables. He retired in 2000 from Great Onyx Job Corps (he spent nine years as mayor of Cave City too), and focused on woodworking. Birdhouses remain his favorites.

“Birdhouses fascinate me; I just like them,” Esters says. “I’ve never seen an ugly birdhouse. I make them mostly of red cedar: birds like it, since it discourages mites. I’ve made 26-room bird hotels, condos, and I’ve got a lady that hand paints some of them.”

Last year he sold some 700 birdhouses. Esters often mans a booth at the Peddler’s Mall in Elizabethtown. Back at his home, he relies on an honor system for customers – if he’s not there and you want something, leave your money or a check in the slot on the garage door.

“I make hanging baskets for flowers and ferns. I can’t keep enough in spring and summer,” Esters says as he works on the day’s projects: a cedar chest and an oak table.