Want to create connections and fall in love with where you live? Just say the word. 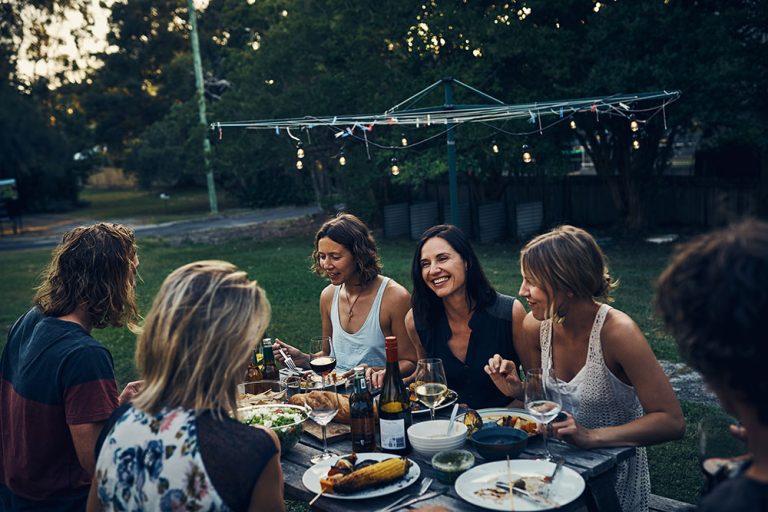 Right before my friend Cristina moved to my town a few years ago, someone gave her this advice: Say yes to everything you’re ever invited to do.

“Since you’re new in town, you’ll probably get invited to things. But you only get one chance, because if you say no, you probably won’t get invited again. So say yes.â€

So Cristina said yes. Over and over. For six months after she landed here, saying yes was her personal mission in life. Would she go to lunch with a bunch of strangers? Sure! Did she want to join the Junior Women’s League? Of course! As a self-described introvert, the thought of socializing with people she barely knew sometimes filled her with anxiety, yet she forced herself to face the awkwardness repeatedly. It was like exposure therapy. Before too long, the awkwardness dissipated and Cristina started making real friends.

Then things got serious. A few months after moving in, she and her husband were at their new friend Holly’s house when talk turned to Holly’s approaching 40th birthday. The big plan: A bunch of couples were all flying to the Caribbean together for a blow-out, rum-soaked birthday weekend. Holly suddenly turned to Cristina and exclaimed, “You should come!â€

Oh no, Cristina thought. She wasn’t sure Holly knew about her say-yes-to-everything pledge. “Are you serious?â€ she said. “I’m not sure you want to invite us.â€

So Cristina and her husband said yes in the biggest way they could have imagined. They bought plane tickets and flew to Jamaica with a bunch of people, some of whom they knew slightly and some of whom they’d never even met. It could have been a disaster, Cristina acknowledges. Instead, she befriended the ultimate squad of BFFs. Two years later, they’re all still hanging out for weekend trips, campouts, and yes, birthdays.

I’ve lived in Blacksburg, Virginia three years longer than Cristina has and probably get a tenth of the party invitations she does–and that may be related to the fact that I have a hard time saying yes. My excuses pile up: I’m too tired, too busy, too shy, too uninterested, too unlikeable, too boring. Eventually, I stop getting invited. Fine, I think, I didn’t want friends anyway.

But the truth is that having a deep bench of friends can make or break your relationship to your town. Humans are actually hard-wired for friendship. A vast University of Michigan study found that friends become even more important than family as we age. Meanwhile, a multitude of other research links positive social relationships to cognitive health, emotional support, lower risk of depression, and increased longevity. Because of all the benefits, replacing the social network you lost when you moved becomes the first order of business in a new place. When we don’t, we suffer.

So how do we make friends? I won’t pretend to know the answer for you, because it depends so much on where you live and who you are. But copying Cristina’s say-yes campaign is a good first step for basically everyone, since it speaks to the openness with which we have to approach a new community and its people. Here are a few tips for making something similar work:

1. Put yourself in situations where you might get an invitation to do something. Attend community events, join a class, sign up for yoga, meet your neighbors, find a church, or otherwise insert yourself into this new universe of a city.

2. Give everyone a chance. Your new friend pool might not look, sound, or act like your old one, which can be disconcerting. But don’t write people off because they don’t seem like your peeps. You may be surprised.

3. Do stuff you don’t want to do (sometimes). Someone at a workshop commented recently that extroverts have it made when they move; all this socializing is right up their alley. What about the poor introverts? I hate to say it, but for now you have to force yourself to socialize too, even on those nights when you’d rather be home in your jammies. Saying yes often now – to the dinner out, the paint-your-own-pottery evening, the concert you’re definitely too exhausted for– allows you the luxury of saying no later on. Occasionally.

The gist of all this? If you want to create lasting connections and fall in love with where you live, say yes. Again and again.