The Louisville Story Program ensures that unheard voices and overlooked communities are able to tell their stories. 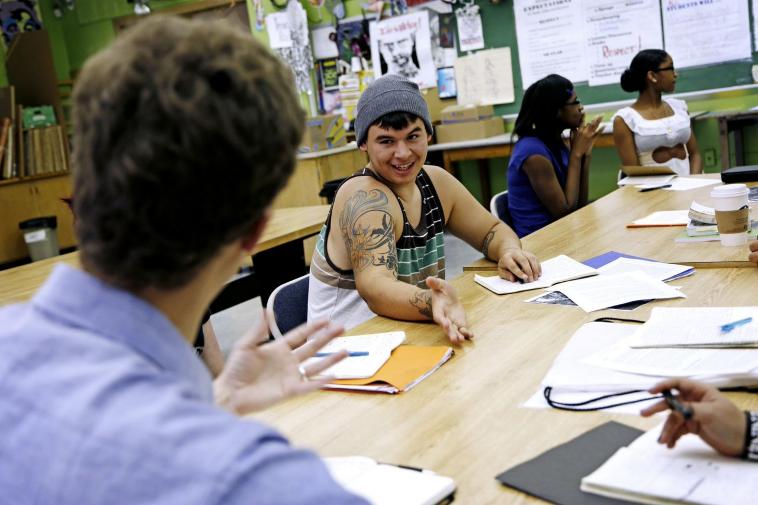 Photo courtesy of Kertis Creative
Stories about inner-city kids discovering hidden talents thanks to a dedicated teacher are a Hollywood staple, but often they are far removed from a very gritty reality. So when the Darcy Thompson launched the Louisville Story Program, a few eyebrows raised. Could this guy get a bunch of kids to write about their lives and then put out a book?
Turns out, he could. And they did. Eight students from The Academy @ Shawnee are now published authors. Our Shawnee features a piece from each student about his or her life in the Louisville neighborhoods of Shawnee, Portland, Iroquois and Algonquin.
Working with Thompson and other mentors, including award-winning poet Nikky Finney, the young writers tackled the very adult themes of life in the juvenile justice system, life after severe head trauma, abandonment and death. They also brought joy to the pages, chronicling the adventure of learning to fly an airplane, and how the smallest acts of kindness can send a young life off in an entirely new direction.
Book Shines Light On Unseen Louisville
“The Louisville Story Program is about telling the untold stories, so we are going to partner with people whose voices and stories we don’t normally get to hear,” Thompson says. “I have worked in the field of education for 15 years through the Teach for America program. I care a lot about the massive inequities in education and community life based on socioeconomic lines, so I wanted to address those.”
The program raised funds to begin Our Shawnee with a Kickstarter campaign and other donations, and those ongoing efforts, now combined with book sales, will fund future projects. Each author is being paid $500 for his or her contribution. In May 2014, the group released 2,090 copies of the book, and within 60 days, 1,200 had been sold. In addition, the authors have appeared at local bookstores, sat on panels to discuss their work, and in general, have become ambassadors for the Louisville Story Program.
Louisville Story Program Takes Bold Look at Inner-city Life
That level of interest bodes well for future efforts, which will include a volume on the Dirt Bowl, a basketball tournament that has been held in Shawnee Park for more than 40 years. The whole goal, Thompson says, is to showcase all the little communities, especially the underserved and unsung ones, which make up the larger tapestry of Louisville.
“These stories have very deep meaning and are incredible examples of regular citizens doing something wonderful in a community that often is only associated with negative things like crime and poverty,” he says. “They want to tell that story.”
The next group of authors will be somewhat older, ranging in age from 32 to 70, but the inaugural set will remain with Thompson for quite some time.
“Here came this stranger who said he wanted to publish a book but gave them nothing to see,” he recalls. “They have had a lot of broken promises in their lives. But they agreed, and they did workshops every week, even during the summer, to get this book written. They wrote about some very tough things, and they were amazing. They’ve done a lot of living for kids who are only 18 years old.”