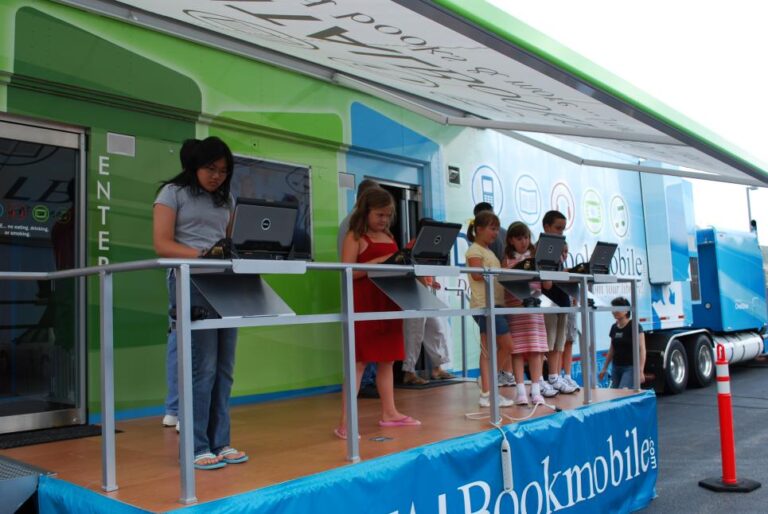 A few years ago, the notion of reading a book on an electronic device was unimaginable – if not worse – to many people. Today, half of Americans own an e-reader or tablet of some kind, according to a recent Pew Foundation study, and many find downloading books, magazines and more a daily activity.

Helping that trend along is a thoroughly modern take on a decades-old service – the bookmobile. But where the classic mobile library pulled up to your corner with a small book collection to share, today’s Digital Bookmobile visits communities and schools to teach people how to use their gadgets to borrow various media from their library’s collection.

The innovative service was developed by OverDrive, a Cleveland-based company that dominates the e-book lending world and whose service is used in more than 90 percent of American public libraries and a growing number of school libraries

“We want to help people understand and embrace our service,” says David Burleigh, OverDrive marketing director. “And we want to help libraries succeed in the shift to electronic media.”

Since the Digital Bookmobile launched its tour in New York’s Central Park in 2008, it has made more than 600 visits in 48 states, and welcomed 150,000 readers of all ages and levels of expertise. The tricked-out 74-foot, 18-wheeler is manned by a full-time driver, a digital media specialist and others who work closely with local library or school staff to introduce visitors to their library’s unique collection.

The Bookmobile contains educational displays and a variety of electronic gadgets, from smartphones and tablets to computers, Kindles, Nooks and other readers, providing a hands-on tutorial on how to borrow e-books, magazines, newspapers, music, and audio and video selections.

“Our visitors run the gamut – and that’s the point,” Burleigh says. “People come who are already using their devices and have questions. Others never have and want to see how it works. After Christmas, when many people receive devices as gifts, people come literally with their boxes in hand and no clue about what to do.”

“We had one man who said he had tried to borrow a book online, but just couldn’t figure it out,” says Chris Hendel, library division and collections manager. “He went into the Bookmobile and came out with a smile on his face. We’re always trying to reach new e-book readers, and it was great to have such knowledgeable people on hand.”

The Bookmobile’s annual tour schedule “follows the sun,” Burleigh says, from the West Coast in early spring and summer, across the country to the Northeast and then through the South. It has also visited Canada, but OverDrive has no plans to send it overseas, despite requests and the company’s dominance in Great Britain and Australia and its growing presence in Europe and Asia.

“E-books are now very mainstream, and the service is more relevant than ever,” Burleigh says. “People who once said they would never read on a device are doing it now. It’s so easy – and there’s no cost.”