Students get what they need to succeed for college, careers, even the stage 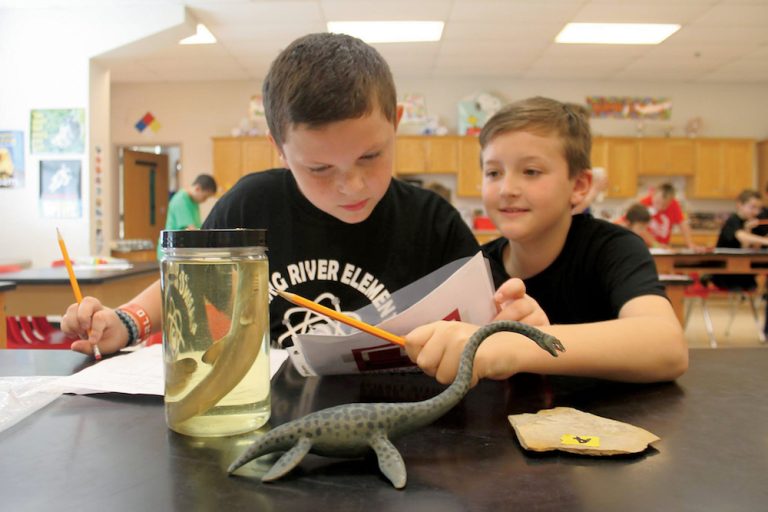 To see just what a positive impact Wilkes County Schools has on its students, look no further than 13-year-old Presley Barker, the young musical phenom who, in 2017, was featured on the NBC television show “Little Big Shotsâ€ and was invited to play at the Grand Ole Opry in Nashville with Ricky Skaggs and Kentucky Thunder.

Presley, a seventh grader at East Wilkes Middle School has been playing bluegrass guitar since he was seven. He has received accolades for his guitar picking from the bluegrass community, including being selected to be part of The Salty Dogs, a group of young musicians from around the country curated by the International Bluegrass Music Association. Presley’s mom, Julie Barker, says while her son honed his ear for music listening to the likes of Doc Watson and attending the community’s Americana music celebration MerleFest, his education in the Wilkes County School system has also played a role in his success.

The Art of Education

“[Presley] had a teacher in third grade who was always putting on plays with the kids, and so from an early age, he was getting used to getting up in front of people and performing and speaking. That really gave him confidence, so he’s never been nervous on stage,â€ Barker says. “The schools also have a great music program. The 12 Note MAP Program is led by Larry Skipper, who was Presley’s first guitar teacher.”

Wilkes County, NC Comes Together Through Food and Fun

In fact, the many different student organizations, cultural arts programs and athletic teams sets the Wilkes County Schools system apart. Groups such as Science Olympiad, STEM Investigations, Battle of the Books and Poetry Out Loud have have all had success on the regional, state and national level, and Westley Wood, executive director of Personnel for Wilkes County Schools, says the performing arts programs continue to grow as student numbers increase in band, chorus and theater arts.

“Special Art Exhibits are sponsored each quarter to showcase student artwork, and all-county choral and band concerts are conducted each year at the middle and high school levels. Students in grades K-8 are provided opportunities to attend performances at the John A. Walker Center, and elementary and middle schools host MerleFest Outreach artists each year during the festival,â€ Wood says.

Another reason for the success of students like Presley is the school system’s implementation of the “Leader in Me – Taking the Lead in Middle Schoolsâ€ program. The program is based on the principles of Stephen Covey’s book The 7 Habits of Highly Effective People.

The school system also plays a major role in workforce development efforts, streamlining its middle and high school course offerings to more closely align with the needs of local businesses and industries and the learning pathways of Wilkes Community College.

“All of our middle schools now teach Computer Science Discoveries, and four of our high schools now offer Technology Education programs that focus heavily on technology used in manufacturing. We have introduced programs such as Adobe Visual and Adobe Digital which align with the programming and coding courses we offer,â€ Wood says.

The school system partners with Wilkes Community College to offer dual enrollment, which allows high school students to earn college credit tuition-free through the Career and College Promise program. Beginning summer 2018, rising seniors will have an opportunity to participate in a paid apprenticeship program that also earns them college credits from WCC.

“It is our hope that these selected students will gain valuable work-based learning experience, and that it will have a tremendous boost in economic development in Wilkes County,â€ Wood says.

Wilkes Community College has expanded its offerings to meet the needs of the business community – including a youth animal science program in partnership with Tyson Foods and a culinary program that includes in-demand courses such as culinary technology and baking/pastry arts. The college has also implemented a program aimed at raising the educational attainment level of the community and closing the skills gap.

“We’re trying to target those high school students that may not show any interest in going to college,â€ says Christopher Bare, chair of Workforce Development for Wilkes Community College. “Students can come to WCC four days a week and over the course of a year earn an accreditation through Certified Production Technician. This program will give those students skills in hydraulics, electrical, OSHA, advanced manufacturing – the types of skills our industries are asking for. And those students, once they graduate high school, would be very marketable.”