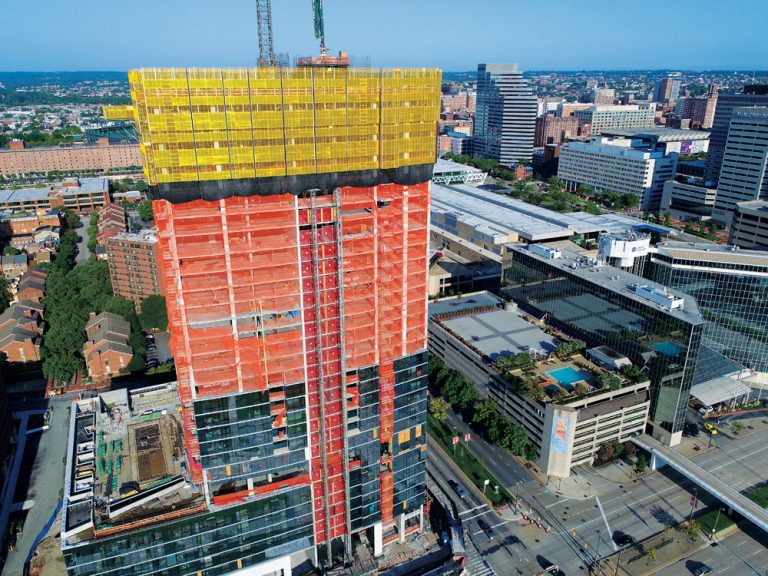 Nothing says urban revitalization like construction cranes in the sky, and Baltimore is seeing plenty of them.

Whether it’s the cranes over the 414 Light Street and One Light Street towers or the ones that have dotted Harbor East and Harbor Point, Greater Baltimore is booming. Capital investment is flowing into the region, igniting a slew of major commercial, retail and residential projects that are reshaping skylines and opening up opportunities for new investment.

Many of the major projects underway now were envisioned before the civil unrest that took place in 2015 but stalled and are finally moving ahead.

“While some might expect that the … unrest had a chilling effect on development, Baltimore has experienced the exact opposite—developers are working with a sense of urgency and resolve to ‘build it now,’” says William H. Cole, president and CEO of the Baltimore Development Corp., a quasi-public agency that oversees development citywide. “That type of resolve is encouraging and hopefully will lead to a more successful future for all residents in Baltimore.”

The biggest development of all is still to come: Port Covington in south Baltimore, which will contain a new global headquarters campus for sportwear giant Under Armour as part of a 235-acre city-within-a-city overlooking the Middle Branch of the Patapsco River.

The land available for development in Port Covington is owned by a joint venture including Sagamore Development and the Goldman Sachs Urban Investment Group, which recently committed $233 million to the project to become part owner.

Port Covington’s master plan calls for a mix of office and manufacturing spaces with housing, recreational areas, retail space and attractions such as the recently-opened Sagamore Spirit whiskey distillery. Buildings will range from low rise structures to towers.

“The state of the city’s economy, the business climate, the local work force, are all strong factors in Baltimore’s growth and progress,” says Tom Geddes, CEO of Plank Industries, an investment firm founded by Under Armour Chairman and CEO Kevin Plank that includes Sagamore Development. “The strength of our city and its economy is a direct result of the hard work of the mayor, the governor and all of our local elected officials, as well as our business and community leaders.“

Port Covington represents a potential investment of more than $1 billion, one of several developments in the works that top that dollar threshold.

Harbor Point, a mixed use community on a former industrial site between Harbor East and Fells Point that has been cleaned up and capped for redevelopment, includes three major buildings complete or nearly complete: the $89 million Thames Street Wharf office building, the $225 million Exelon office and residential tower and 1405 Point, a $90 million tower with 289 apartments. Harbor Point also has a 225,000-square-foot office building and a 156-room.

“Those buildings represent about one third of the proposed build-out of 3 million square feet and 9.5 acres of open space over 28 acres in all,” says Jonathan Flesher, vice president of development at Beatty Development Group, the project’s master developer.

“Part of what we have is outstanding views and an outstanding neighborhood,” he says. “We are constantly selling Baltimore, selling Maryland. You have to get people here. When we get people here, they say, ‘We had no idea so much is happening. It is a really great place.”