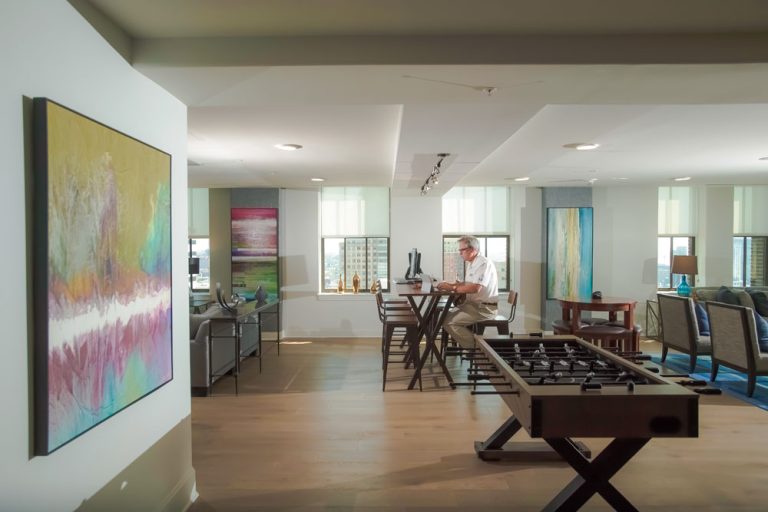 “I’m very bullish on Baltimore and Innovation Village, so if I’m too excited, you’re gonna have to make me tamp it down a little bit,” says Andre Robinson, executive director of the Mount Royal Community Development Corporation, a group comprised of West Baltimore residents responsible for spearheading the Innovation Village project.

Robinson’s excitement for Innovation Village, a nearly seven-square-mile stretch of real estate bordered by Coppin State University to the west and the University of Baltimore to the east, is warranted. If organizers get their wish list, Innovation Village will eventually be home to high-tech startups, a business accelerator, a grocery store, a health-care clinic, a 50,000-square-foot innovation center, retail space and new apartments.

Robinson’s group and the newly formed nonprofit Innovation Village hope to bring jobs, housing and new ideas to an area of Baltimore where unemployment is high.

Robinson says a first step to the neighborhood’s revitalization was the demolition in 2016 of Madison Park North apartments, a former housing project that was one of the centers for drugs and crime on the west side. The city pitched in $100,000 to help with demolition efforts, and developers David Bramble of MCB Real Estate and Mark Renbaum of MLR Partners have lofty plans to convert the space into a mixed-use development that could include the innovation center, retail and housing space and even a community health center.

“The overall goal is to create something transformative for West Baltimore, which has struggled to attract new investment,” Bramble, a Baltimore native, told local real estate publication Blsnow. “And this is my neighborhood, too; I grew up around the corner. It’s been a long time since something major like this happened.”

Other organizations, both private and public, have also staked bets on the project. The City of Baltimore and Maryland awarded the project a $2 million grant through Project C.O.R.E., and the Baltimore Development Corp. kicked in $100,000 of its innovation fund.

The Greater Baltimore Urban League launched the Raymond V. Haysbert, Sr. Center for Entrepreneurship in the Orchard Street Church in the Druid Hill community of West Baltimore. The center offers workshops, seminars and one-on-one counseling in subjects such as business planning, marketing and grant writing, for fledgling businesses. Conscious Venture Lab, an accelerator program for startups, launched the Urban Resilience and Smart Cities cohort in Innovation Village in fall 2017. Companies were selected based on their approach to urban issues, such as economic disparity and high unemployment.

“At the end of the day, revitalization has to be tied to the economic development of the people who have historically been left out.” Robinson says.

Robinson says he hopes the influx of innovative companies will also serve as inspiration for the community’s younger generation.

“Most of the images that we conjure up when we say ‘innovation’ or ‘technology solution’ are almost all white and almost exclusively male. Part of this project is addressing what innovation really means. This community once housed giants of industry, and kids walk by their houses every day,” he says. “The venue for innovation is the neighborhoods themselves, and you look at the places where our kids don’t feel like they belong, and that’s where you begin. It’s not just a fresh air fund; I’m not trying to get them to flee the hood and have to go to the country in order to have a good experience. I’m saying, ‘There are giants in industries that you need to know about that invented this stuff, and they grew up in that house over there.’”