Why Every City Needs a Neighborhood Design Center

By Stephanie Stewart-Howard on December 16, 2014 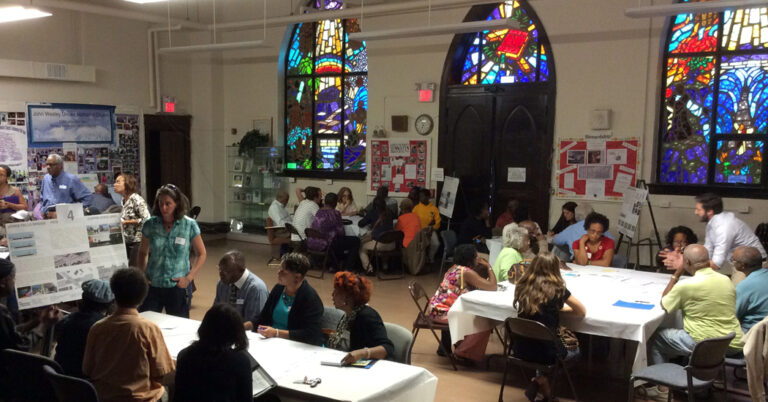 Since 1968, the Neighborhood Design Centers in Baltimore and Prince George’s County, MD, have helped residents revitalize commercial areas, reclaim vacant lots, and provide planning and design services to more than 1,800 community initiatives. Here’s a look at the good work the NDC has accomplished and why other cities could benefit from similar programs.

The NDC was developed following a speech by the executive chairman of the Urban League, Whitney Young, in 1968 issuing a challenge for architects and designers to participate actively in renewal and transformation in the wake of urban decay during the Civil Rights Movement. A host of volunteer design centers followed nationally, but most vanished over time, as the perceived importance of their work waned. But the Baltimore area’s NDC (a nonprofit, 501 c 3) has thrived and still makes tremendous impact through the efforts of a board of directors, volunteers, full and part-time staff, and the support of local government.

NDC’s priorities are determined by the community and neighborhoods themselves, according to Laura Wheaton, architect and program manager for the Baltimore office. “Essentially, the community looks at its own neighborhood and finds ways to enact change,â€ she says.

Wheaton says that many of the projects recently proposed have involved transportation and greening on a neighborhood scale. She sites a current example, the streetscaping of a 3-mile corridor of West North Avenue, which she says is a bit of a vacuum between neighborhoods but serves as a major thoroughfare for Baltimore commuters.

Working  with a group of three community organizations, input from a dozen neighborhoods, and the City Department of Transportation plus City Councilman Nick Mosby, they’ve completed two of the expected three drafts of the project. It’s the biggest this year – with help from a Baltimore Community Foundation grant, they used a volunteer-staffed free snowcone stand as impetus to encourage hundreds of residents to take a survey about their hopes for the project. The rest of the grant went toward planting thousands of daffodil bulbs along the route, which should be blooming just in time for the final draft’s release.

In Prince George’s County, NDC partnered with county’s public works division for Clean Up, Green Up, according to Program Manager Kelley Oklesson. The county provided more than $150,000 in free trees, shrubs and perennials to residents, NDC volunteers provided design help, and 75 neighborhoods worked to beautify public spaces. It saved the county money and brought residents together in the process.

Another popular NDC program helped turn vacant lots into venues for performing arts in the Union Square, Franklin Square and Hollins Roundhouse neighborhoods. Baltimore’s Adopt-A-Lot program enables neighborhoods to reclaim and care for vacant lots for a period. The city will later assess whether that lot is needed for city projects, and if not, the residents can transform it to permanent green space.

A recent Baltimore project designed a sign for the historic Glen neighborhood  to help it rebrand. The old metal sign was in disrepair, and the volunteer designers envisioned a sturdier one in brick. They made use of programs with Baltimore’s Department of Public Safety, both using reclaimed bricks from one of its demolished old prisons and utilizing labor from inmates who have completed a masonry training program.

“It’s great for everyone involved,â€ Wheaton says. “The bricks are cheaper for the neighborhood; the Department’s reclamation program is effective, and the inmates completing the program continue to gain experience before release, with a portfolio of specialized work to show eventual potential employers.”

“Programs like NDC’s were more common in the late ’60s and early ’70s,â€ Wheaton says, “when there was a groundswell of community design. Whitney Young’s speech inspired many people. Unfortunately, a lot of organizations disbanded over the years because they couldn’t get funded. Now there seems to be a new interest, and we’re excited to see that. There is certainly enough need for this kind of design.”

NDC started as an all-volunteer organization, with designers getting together to work. When asked how other communities can build similar programs, Wheaton says it comes down to the work of volunteer designers lending their efforts and talents, and to the support of local government to help make this kind of urban renewal possible.

“Lack of funding issues go in cycles,â€ she says. “But ultimately, we are also driven by the residents themselves – they come to us really excited about making a project happen.”

While Baltimore has experienced the expected recent decades of Rust Belt urban flight, the work of NDC in both the city and county (where greening projects, including the planting of nearly 15,000 trees, dominate) can absolutely serve as a shining example for metropolitan areas all over looking to refresh and renew as cities change, with the efforts of designers willing to help, committed residents and a city government invested in making positive change.

“Programs like NDC’s were more common in the late ’60s and early ’70s, when there was a groundswell of community design. Whitney Young’s speech inspired many people. Unfortunately, a lot of organizations disbanded over the years because they couldn’t get funded. Now there seems to be a new interest, and we’re excited to see that. There is certainly enough need for this kind of design.”