Below the surface and on the shore, water plays a huge role in the Maryland's Eastern Shore economy. 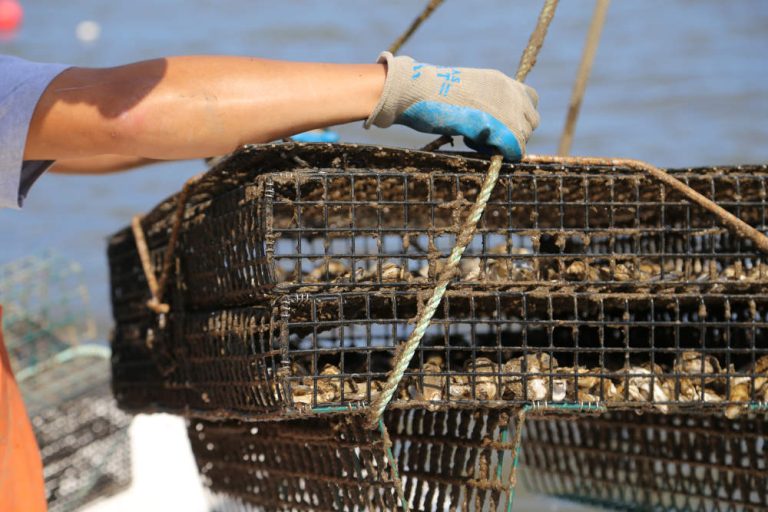 The value of Maryland’s Eastern Shore can be measured in the region’s liquid assets. From the seafood-rich Chesapeake Bay to numerous inland rivers and tributaries, there is water, water everywhere, and it is worth more to the local economy than some might think. “There are a lot of industries around here that rely on the water, and it’s not specific to any one county,” says Jamie Williams, economic development coordinator for Kent County. “It covers the whole region. All of our counties are experiencing the same thing. You’re seeing a lot of industries starting to diversify and really take advantage of the water.”

A New Bed for Oysters

One of the fastest-growing industries based around the water is aquaculture, and it is providing a needed boost to oyster production in the region. Several enterprises have started over the past five years that focus on raising oysters in much the same way that a farmer raises fruits and vegetables – through sustainable production. “There was a time when the Chesapeake Bay was the largest exporter of oysters globally, but over- harvesting has reduced the levels,” says Scott Budden, an Eastern Shore native and owner of Chestertown- based Orchard Point Oysters, which planted its first crop of oysters in the spring of 2015.

“Our goal is to harvest only what we put in. It’s a new way of doing something that we’ve always done around here.”

Other companies that have become involved in the aquaculture effort include Tilghman Island Oyster Farm, Hoopers Island Oyster Aquaculture Co. and Harris Seafood Co., which received $10,000 from Queen Anne’s County in 2015 to support its oyster recovery efforts.Plenty of seafood beyond oysters is coming out of the Chesapeake Bay and contributing to the local economy. Easton-based SeaWatch International operates a fleet of 30 clamming boats and is the largest harvester and processor of clam products in the world. Kool Ice & Seafood in Cambridge has been processing and shipping local seafood since 1972, and United Shellfish Co. in Grasonville harvests and distributes specialty seafood such as Maryland blue crab and Chesapeake Bay rockfish.

Because the health of the Chesapeake Bay is so vital to the area economy, the region is a natural base for studies in environmental and ecological impact. The largest federal lab in the region is the Cooperative Oxford Lab in Talbot County, which includes the NOAA (National Oceanic and Atmospheric Administration), the Maryland Department of Natural Resources and the Coast Guard.

The lab employs 40 scientists and technicians who monitor the bay’s ecosystem and evaluate actions and policies designed to protect marine life. The University of Maryland’s Horn Point Laboratory, located on the Choptank River, conducts research in areas ranging from plankton dynamics to wetland ecology, and the Wye Research & Education Center in Queenstown focuses on preserving the vitality of the Chesapeake Bay and sustaining agricultural productivity. In Easton, the Calhoun MEBA Engineering School provides maritime education and training for members of the Marine Engineers Beneficial Association – the nation’s oldest maritime trade union – as well as industry professionals.

Water recreation is also a major contributor to the Eastern Shore economy. Queen Anne’s County receives a $73 million impact from recreational boating alone. Marinas and yacht clubs are prevalent throughout the region, primarily because of abundant access to the water. Dorchester County has many wetlands, two major rivers and 1,700 miles of shoreline. Talbot and Queen’s Anne counties have nearly 1,000 miles of shoreline combined.

Numerous businesses in the area cater to the boating culture. Campbell’s Custom Yachts in Oxford builds boats for personal and commercial use, from cocktail cruisers to luxury yachts. In Talbot County, Cutts & Case and Abreau Boatworks carry on the region’s wooden boatbuilding tradition. Charter services also abound. The Choptank Riverboat Co., offers cruises on reproductions of late 19th-century paddle wheelers, and The Chester River Packet Co. in Chestertown conducts daytime and evening cruises for passengers. The region also flourishes with fun on the water’s edge. Event venues have been popping up along the waterfront in recent years, including Brittland Estates, a favorite venue in Chestertown for weddings and corporate functions, and Turnbridge Point, a waterfront bed and breakfast that also doubles as an event venue in Denton.

The Chesapeake Bay Beach Club, located at the base of the Bay Bridge in Stevensville, has become one of the East Coast’s premier wedding destinations. In 2015, the club opened a $22 million, 54-room luxury boutique inn that includes a five-star restaurant, a market and other amenities. The Inn at Perry Cabin by Belmond, located in St. Michaels, is also poised for expansion and offers a waterside venue for visitors, conferences and events. Ancillary businesses are also thriving. Eastern Shore Tents and Events is constructing an industrial warehouse and office with nearly 36,000 square feet in the Worton Business Park to keep pace with the growing demand for waterfront events. Marinas are diversifying as well, adding beach bars and specialty venues of their own. The new pavilion at Chestertown’s Tolchester Marina has been used for events ranging from weddings to murder mystery dinners, and the marina’s expanded Shanty Bar has taken off, says owner Aaron Bramble.

“We’re trying to bring in non-boaters and take advantage of the location and the view,” Bramble says. “The marina industry is becoming more of a resort-style type of destination, with lodging, bars and beachfront. That’s really the focus we need to have going forward.”