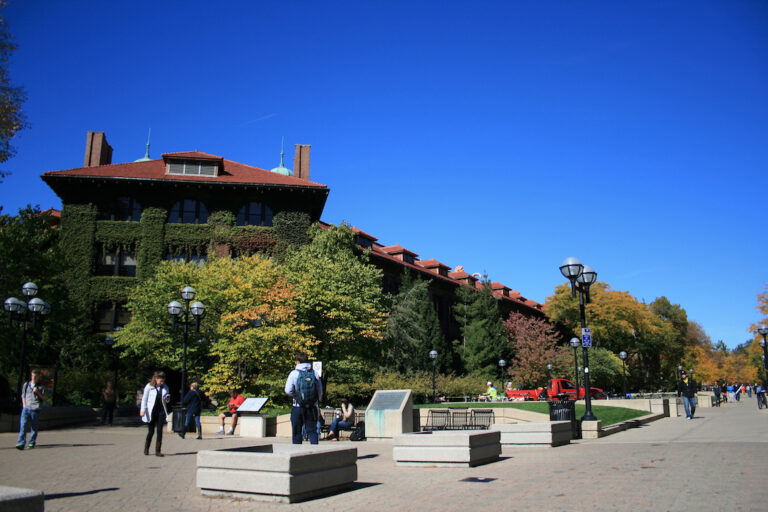 Ann Arbor / Courtesy of Julie Falk under a CC 4.0 license.

In March 2013, serial entrepreneur Steve Blank told the Weather Underground Startup Trek, the annual “entrepreneur-athonâ€ held in the Bay Area, not to start a company in Silicon Valley.

“Don’t start your company here, start it in Ann Arbor. You won’t find the talent you need here, it’s in Ann Arbor,â€ he said.

In the five years since Blank made that statement, the Ann Arbor region’s entrepreneurial environment has only developed further, with its well-educated talent pool, enviable research and development assets and roster of more than 870 companies engaged in everything from bioinformatics to network security.

More than 17,700 people work in the region’s tech sector. Internationally recognized technology brands with a presence in the region include Thomson Reuters, Truven Health Analytics, Nokia and Google, whose AdWords division is based in Ann Arbor.

Tech employers such as ProQuest, which powers research in academic, corporate, government, public and school libraries, and Barracuda Networks, which provides cloud-connected security and storage solutions to users in more than 100 countries have major footprints in the region.

Barracuda Networks in 2017 announced an expansion in Ann Arbor that will add 115 jobs, including software and tech support engineers, to its staff of 225.

The region’s innovation ecosystem, which includes the University of Michigan and Eastern Michigan University, has spawned cutting- edge startups and entrepreneurial ventures.

“Ann Arbor’s cottage industry is learning, built upon our world- class universities,â€ says Steve McElfresh, senior vice president at Duo Security, one of the region’s homegrown technology success stories. “You can’t walk down the street without running into a teacher, designer or engineer. This wealth of talent, supported by a close-knit entrepreneurial community, makes the perfect conditions for ideas to come to fruition and businesses to thrive.â€

Founded in 2010, Duo has opened offices in London, Austin and San Mateo, Calif. The company in October 2017 raised $70 million in a new round of funding, which put its valuation at $1.17 billion. That funding round brought the company’s total amount raised to $119 million.

Duo Security serves more than 10,000 customers globally, helping to protect them from data breaches. The Ann Arbor region has played a significant role in the company’s success. “Ann Arbor’s culture of learning is embedded in Duo’s DNA,â€ McElfresh says. “What makes Duo different is that we learn fast and change quickly. Our culture is focused on continuously engineering the business with team members who learn together, building on one another’s strengths.â€

Students and workers who come to the Ann Arbor region tend to stay. More than a third of the University of Michigan’s College of Engineering graduates settle in Michigan after school, much like many of the hundreds of computer science and computer engineering grads from Eastern Michigan. U-M’s Computer Science program was ranked eighth best in the U.S., according to College Choice.

A network of resources supports entrepreneurs, such as Arbor SPARK’s business incubators, located in downtown Ann Arbor and Ypsilanti. The incubators provide space for startups and out-of-state firms seeking a presence in area. Attractive campus-style parks are locations for larger software firms. Google AdWords relocated to an office park on the north side of town to accommodate its continued growth.

A strong sense of community permeates the region’s tech companies, connecting them with each other and to the skilled talent that fuels their growth. Nonprofit organization A2 Geeks helps foster that sense of community through a variety of events, tours and meetings, enriching Ann Arbor for creatives and innovators.

McElfresh notes that the region’s quality of life and moderate cost of living – especially as compared to Silicon Valley and other tech hubs – are major draws.