Things To Do in Ann Arbor, MI

You'll never get bored in this town that has more culture and authenticity than you'd think. 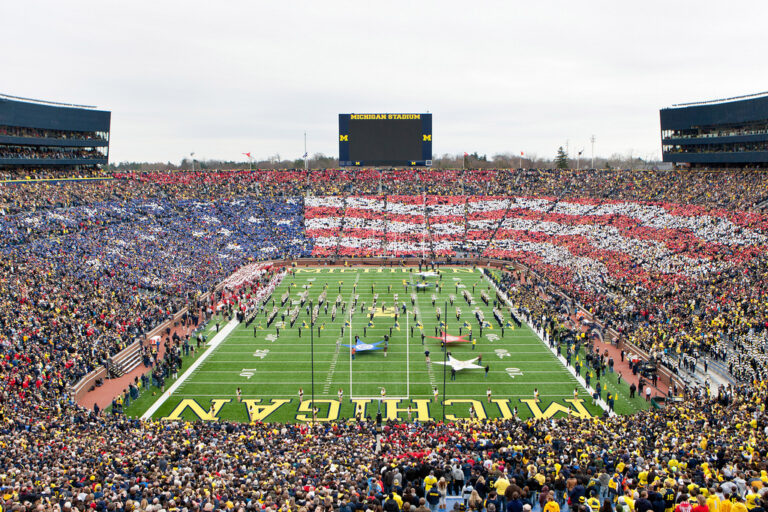 Go Blue! Perhaps the best-known attraction in Ann Arbor is the 109,000-seat Michigan Stadium that hosts Wolverines college football games in the fall, but don’t think there’s only fun for undergrads in A2. There are numerous things to do for everyone, including:

The University of Michigan Museum of Art will make a connoisseur out of any visitor thanks to more than 19,000 works on display, which ranks the U of M facility among the largest university art museums in the United States. Also on campus, the University of Michigan Museum of Natural History and Kelsey Museum of Archaeology house dinosaurs and relics from Mediterranean civilizations, and the family-friendly Ann Arbor Hands-On Museum encourages visitors to roll up their sleeves and explore and touch the exhibits. Seeking some American history? Try the Gerald R. Ford Presidential Library & Museum to gain insight on our 38th president.

Football fans will be right at home in Wolverine country, as long as you wear the university’s maize and blue colors on game day. This Big 10 team has the best winning percentage in college football history and is a serious rival with Ohio State, Penn State and Wisconsin, and the football squad has experienced renewed resurgence ever since head coach Jim Harbaugh took the reins in 2015. Harbaugh was also quarterback for the Wolverines from 1983-1986 under legendary U of M coach Bo Schembechler.

Why Ann Arbor, MI is One of the Best Places to Live in the U.S.

New to town and only have time to stop once in Ann Arbor? Nationally recognized Main Street is a must see. Combining nightlife, restaurants, shopping and the arts, it is a perfect spot to explore Ann Arbor culture. It’s a gathering place for everyone from freshmen college students to retirees, although you will typically see more young people along Main Street since the city’s average age is 28.

An institution for 60 years is Krazy Jim’s Blimpy Burger, where customers can order juicy hamburgers ranging in size from one to five patties. The popular hotspot has been featured on Food Network’s Diners Drive-Ins and Dives, and an etiquette sheet is posted near the counter because there is a certain way to order a Blimpy Burger.

Thinking About Moving There? Here are 8 Reasons to Move to Ann Arbor, MI

The Huron River is usually a calm and lazy waterway, but the Argo Cascades opened in 2012 to provide a series of nine drops and pools for people to enjoy tubing, rafting and kayaking. A perfect place to launch is Argo Canoe Livery near the Broadway Bridges overpass, and a full line of equipment can be rented at the livery.

Many parts of A2 are ideal for shopping and eating, including along Main Street, South State Street and South University Avenue. One of the most visited destinations is the Kerrytown Market & Shops on N. Fifth Avenue, with popular stores like V2V, Princess Designs and Fustini’s Oils & Vinegars, and top-notch eateries like Kosmo, The Lunch Room, Miss Kim and Sweetwaters.

Ann Arbor is designated a Bicycle Friendly City by the League of American Bicyclists, with nearly 400 bike loops in the downtown district alone. Many students bike to class on the U of M campus, and the city offers 79 miles of bike lanes. Several bike shops are thriving in Ann Arbor and offer rentals to residents as well as visitors to the city.