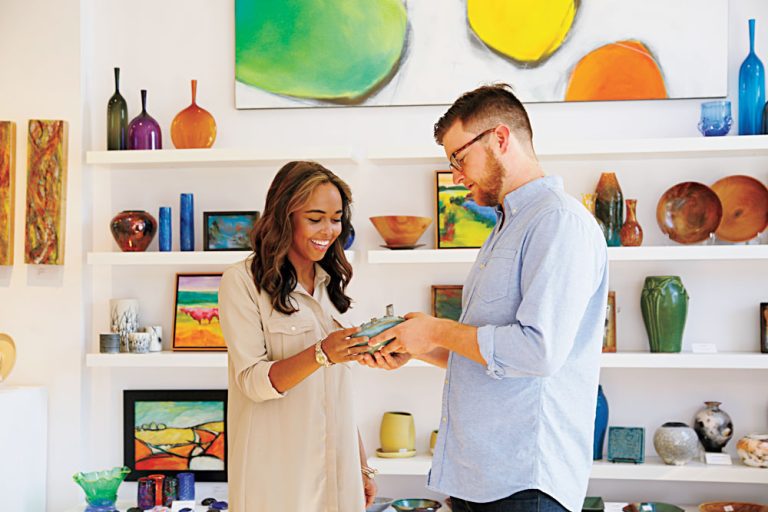 A creative culture and a thriving arts scene resonate throughout the Ann Arbor region, with a participatory passion.

Two major universities in the region contribute to this cultural phenomenon. The University of Michigan Museum of Art has more than 19,000 works on display, including one of the largest collections of Tiffany objects including architectural pieces such as doors and a stunning chandelier. Also on campus are the University of Michigan Museum of Natural History and Kelsey Museum of Archaeology.

A lively arts scene includes scores of local shops and galleries, such as The Eyrie in Ypsilanti’s historic Depot Town, Bumble’s Dry Goods in Chelsea and Artistica in Dexter.

The Eyrie features creations from more than 220 artisans, including photographs, greeting cards, jewelry, paintings, pottery, blown glass, candles, and soap — almost all of it handcrafted by Michigan artists and artisans.

Owner Janette Rook opened The Eyrie in 2013. A former labor leader, Rock says fair trade and business practices are important to her, as well as the uniqueness that can be found by sourcing locally.

“Ann Arbor and Ypsilanti are very welcoming to artists, and the people who live here are willing to support local artists and businesses,” Rook says.

The 108-year-old Ann Arbor Art Center — one of the oldest, most respected community arts organizations in the state — draws more than 50,000 visitors each year to its rotating exhibition galleries, hands-on classes, and gallery shop featuring original artworks.

“Art ignites emotion and adds to the quality of life here, and we’re happy to be a place where people can connect with art,” says Luisa Puentes, marketing director at Ann Arbor Art Center.

The region also fosters a bibliophile culture with destinations like Literati Bookstore which hosts events and has a locally owned coffee shop on one of its three floors. Customers may also leave messages on a public typewriter, which are then included on Literati’s social media channels and on a mural painted outside the shop.

The Arbor Art Fair is one of Michigan’s finest summer traditions and one of the largest outdoor art fairs in the nation. Comprised of four fairs under a single marquee event, the very first fair began in 1960. Today, the four-day event spans 30 city blocks, features 1,000 artists and attracts approximately 500,000 visitors annually.

Indie art fairs and seasonal pop-us are also growing in the region, such as DIYpsi and Paint Dexter Plein Air Festival.

The Michigan Theater is a living testimony to the arts, a restored gem that shows films and stages plays, concerts and other events that draw 300,000 visitors a year. Its sister, the art deco classic State Theater, re-opened in 2017 after a multi-million dollar renovation.

Considered one of the top live music clubs in the world, the 400- seat The Ark provides an intimate setting for a full spectrum of acoustic and roots/Americana music more than 300 nights each year.

“I love being in downtown Ann Arbor surrounded by amazing restaurants, great bars and lively arts and culture offerings,” says Barb Chaffer Authier, marketing director at The Ark. “The arts community supports each other and is very collaborative, so there is something for everyone to enjoy entertainment-wise downtown.”

There’s no denying it — working remotely has its perks. But what are we giving up if we don’t return to the office? What value might we miss out on? … END_OF_DOCUMENT_TOKEN_TO_BE_REPLACED