Distinctive Downtowns Add To The Appeal Of The Ann Arbor Region 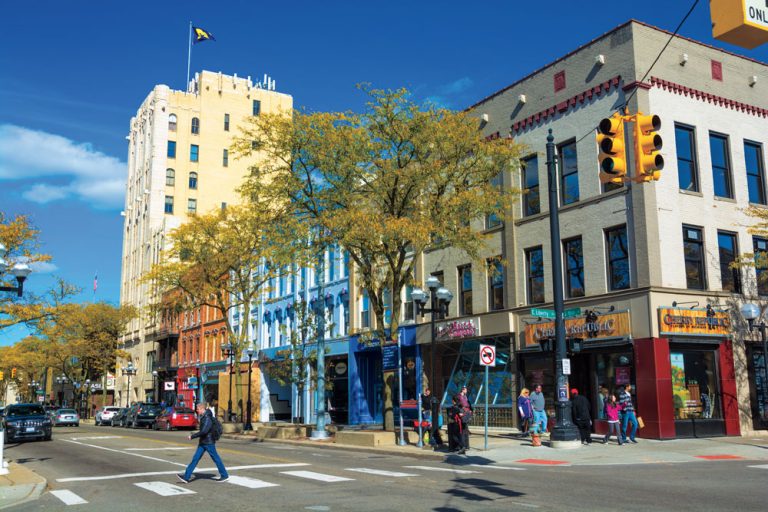 Ann Arbor consistently rates as one of the nation’s best college towns, but it is much more than that.

A winning hand of vibrant downtowns, cool neighborhoods, and diverse arts, entertainment and food scenes plus lower costs and freedom from big city traffic hassles have job seekers going all-in on the Ann Arbor region. Not only was Ann Arbor a top college town on Livability.com, it was No. 1 on the 2018 Best Places to Live ranking and No. 7 on the Best Cities for Entrepreneurs.

The best schools in the state are in Ann Arbor and surrounding communities, including four that ranked on U.S. News & World Report’s best high schools in Michigan.

The highly walkable Main Street area of Ann Arbor attracts boutiques, galleries, restaurants and shops, plus serves as a hub of commerce with more than 1,300 businesses and more than 18,000 workers. The 271-acre district is the address of more than 230 of the region’s 870+ technology companies.

In addition, more than 6,500 people live in downtown Ann Arbor.

“The downtown vibe remains on fire and the demand for office, residential and commercial space is through the roof,” says Ed Shaffran, owner of Shaffran Companies, which specializes in preservation of historic buildings and spaces.

Shaffran, who has been involved in real estate development in downtown Ann Arbor since the 1970s, has served on the Ann Arbor Downtown Development Authority and the Main Street Area Association. He notes the distinctive “Ann Arbor look” of downtown buildings that feature brick walls, exposed wood beam ceilings and preserved original hardwood floors.

Ann Arbor has more restaurants per resident than any city in the U.S., and foodies will find an eatery to suit any taste or price range. Ann Arbor residents spend 60 percent more than the national average on dining out and entertainment.

Fresh local food is available in abundance. The Ann Arbor Farmers Market offers local produce, baked goods and value- added products as well as an artisan marketplace. In addition, smaller community-based markets have been popping up in recent years to supply neighborhoods.

Don Knight, a fifth-generation Ann Arborite, knows the region’s restaurant industry well. Knight is chief operating officer for Knights Family of Businesses, which began as a meat market started by his father, Raymond, in 1952 that still exists today as Knight’s Market. The company also owns two Knight’s Steakhouse restaurants and a catering business.

Ann Arbor has embraced boutique spirits and the artisan cocktail culture. Among the popular bars making impact with their creative cocktails are the Raven’s Club and The Last Word.

The region’s thirst for craft beer has created a thriving microbrew business that includes Grizzly Peak Brewing in Ann Arbor and Ypsi Alehouse in Ypsilanti.

Mani Osteria, a family-owned Italian restaurant in Ann Arbor, scored a spot on Food & Wine’s list of Best Pizza Places in the U.S., thanks to its locally grown ingredients and flavor combinations cooked to perfection in wood-burning ovens.

Popular downtown restaurant Frita Batidos is an eatery inspired by Cuban culture and cuisine. The menu is described as “self-driven,” with owner and chef Eve Aronoff, who appeared on the Bravo television show Top Chef, learning much of her early culinary craft from her Cuban grandmother in Miami.

“I have a very diverse cooking experience, starting out as a hot dog vendor at Fenway Park in Boston when I was in college and have been cooking ever since,” says Aronoff, who studied at Le Cordon Bleu in Paris. “I have cooked in the most informal to the most formal restaurant environments. I wanted to bring together what I loved the most about both worlds.”

Aronoff and Knight each note the diversity of clientele their restaurants attract, from University of Michigan students to office workers, professionals and trades people and from diverse ethnic backgrounds who grew up with homemade traditional food.

There’s no denying it — working remotely has its perks. But what are we giving up if we don’t return to the office? What value might we miss out on? … END_OF_DOCUMENT_TOKEN_TO_BE_REPLACED