What happens when you put a public typewriter in a literary city's most beloved bookstore? People pour their hearts out, one letter at a time. 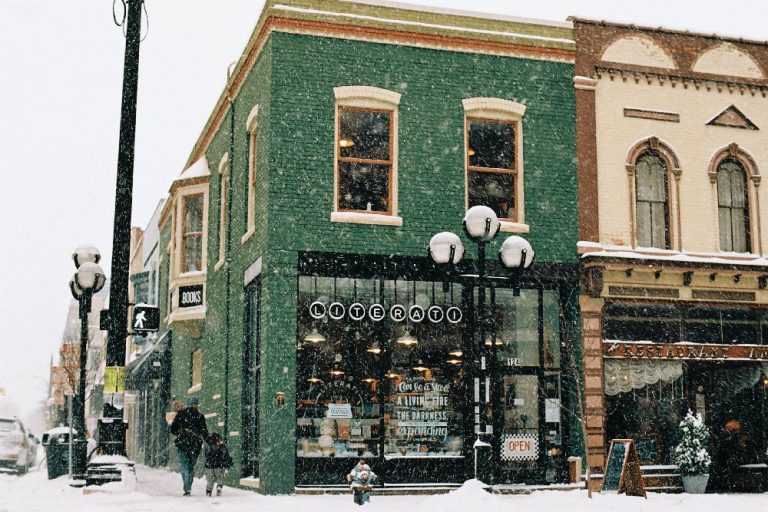 Michael and Hilary Gustafson moved back to their home state of Michigan from New York City in 2012 with a lofty goal: to pursue their dream of opening a small, independent book shop in the charming college town of Ann Arbor. At a time when bookstores were shuttering across the country, friends and family weren’t shy about letting them know they thought their plan was a bit crazy.

“It may have been, but we were our own cheerleaders,â€ Michael, 34 told Livability. “It was our dream, but we also saw a market opportunity after so many stores, including Borders Books – which started out in Ann Arbor in the 1970’s – had closed nationwide. We truly believed a smaller sized, community-oriented indie bookshop that also hosted events could thrive.”

And thrive, it did.

Literati Bookstore opened in 2013 and quickly captured the devotion of literature-loving Ann Arbor, home of the University of Michigan. The modern yet cozy shop is situated in an endearing, dark green building in the heart of downtown, with three floors stacked with books and personal touches, including handwritten and signed staff recommendations on each shelf.

Literati has become one of the most frequented stores in the area, hosting 150-200 readings and author events as well as a slew of book clubs. But its biggest draw is something totally unexpected: a typewriter set out for anyone to use, waiting for an author to share their thoughts.

Michael has long held an affection for typewriters that started with his grandfather’s 1930’s Smith Corona that he inherited at a time when he was struggling as a writer. “The typewriter made me feel connected to language again,â€ he says. “The tactile experience of putting word to paper is a different, more romantic, process, than on a computer.”

On Literati’s first day open, the Gustafsons placed a beautiful, black Olivetti Lettera 32 atop a table, stocked with a blank piece of paper. They weren’t sure what to expect, but almost immediately, people began typing. And what they like to call the “world’s smallest publishing house” was born.

“The messages started out as simple ‘thank you for being open’ notes, but turned more personal and poignant over time,â€ Michael says. Over the past several years, thousands of people of all ages and backgrounds have clanked away on its keys, pouring their thoughts and hearts on pages, from jokes to advice to secrets and desires. Now, those messages have been compiled into the book, “Notes from a Public Typewriter,” released this month.

The book is a selection of the couple’s favorite notes, ranging from the humorous to the heartbreaking. Confessionals, love notes, even marriage proposals – they’ve seen it all. And they do see every single one.

From the beginning, Michael and Hilary have read all of the messages left, often posting the best to the wall above the typewriter for inspiration. Eventually, they began uploading them to social media and received a warm reaction, many people touched by their honesty and vulnerability.

“This is my second day sober,â€ one person typed. “My son thinks that I am a genius because I know how to type… finally, he is impressed with me,â€ a parent joked. “I’m scared I’ll spend half my life deciding what to do with it and the other half regretting that choice,â€ another note reads.

Michael calls the book an ode to Ann Arbor, a community that loves the written word. If anywhere should be classified a “book town,â€ this is it – at its peak, it was home to more than 20 book stores, more per capita than anywhere in the country. Many are still open, including Common Language, one of the country’s last surviving LGBTQ feminist bookstore; Crazy Wisdom Bookstore, serving the holistic community; Motte and Bailey Booksellers, a rare and used bookstore with specialties in American and European history. This list goes on.

“We have been overwhelmed by the amount of support from the community – it is a testament to the passion people in Ann Arbor have, not just for books, but buying locally,â€ Michael says. “This town has seen so many beloved book stores close; they are determined not to let that happen to us.”

There’s no denying it — working remotely has its perks. But what are we giving up if we don’t return to the office? What value might we miss out on? … END_OF_DOCUMENT_TOKEN_TO_BE_REPLACED