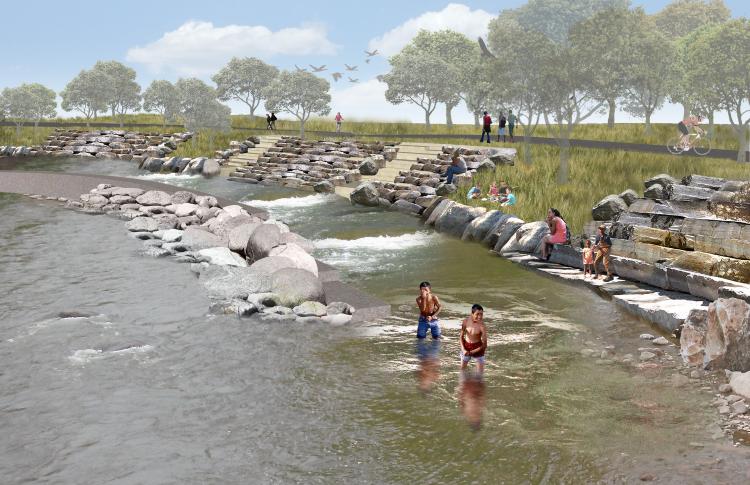 Fellow kayaking enthusiasts and Grand Rapids, Mich., residents Chris Muller and Chip Richards first started talking about the possibility of restoring the rapids to the Grand River seven years ago over a beer at Founders Brewing Co.

"It started with a basic notion,” Muller recalls. “There used to be rapids. Why aren't they there anymore, and what would it take to bring them back?"

Their conversation has since grown into a public-private partnership and revitalization effort that has the support of area boaters, fishermen, businesses and philanthropists, as well as Mayor George Heartwell, Gov. Rick Snyder, Sen. Debbie Stabenow and the Michigan Department of Natural Resources. In May 2013, it gained the endorsement of the White House with the project’s addition to the Urban Waters Federal Partnership.

The Grand River runs through the core of downtown Grand Rapids and drops 18 feet in elevation within that 2-mile stretch. To put the amount of drop – and whitewater potential – in perspective, Muller explains, consider the fact that the river drops only four more feet over the next 40 miles.

The Grand’s natural whitewater rapids disappeared when dams that were built more than a century ago and dredging of the riverbed smoothed its waters. Taking out the dams and using thousands of tons of boulders, rocks and gravel to restore the riverbed would “put the rapids back in the Grand," Muller and Richards say.

Getting buy-in on their big idea was not easy in the beginning.

"The first couple years were pretty brutal," Muller says. "We had a lot of people who just said, 'No. That's crazy.' But Chip and I are pretty stubborn, so when we believe in something enough, it's hard to tell us no.”

Muller, a real estate broker and consultant by trade, and Richards, a retired commercial photographer and stay-at-home dad, formed the nonprofit Grand Rapids Whitewater (GRWW) in 2009. They enlisted the help of Colorado-based RiverRestoration, an organization that provides planning, engineering and technical support for such projects. A community engagement process helped pull together diverse interest groups, which expanded the scope of the Grand River revitalization project beyond the initial vision of creating a whitewater recreation area.

Those refined goals include restoration of habitat for lake sturgeon and endangered snuffbox mussels as well as bringing new economic opportunity and greater livability to Grand Rapids.

“I’m definitely here to stay and see it to completion,” Muller says. “It’s really exciting to see how the city will grow around a restored river.”