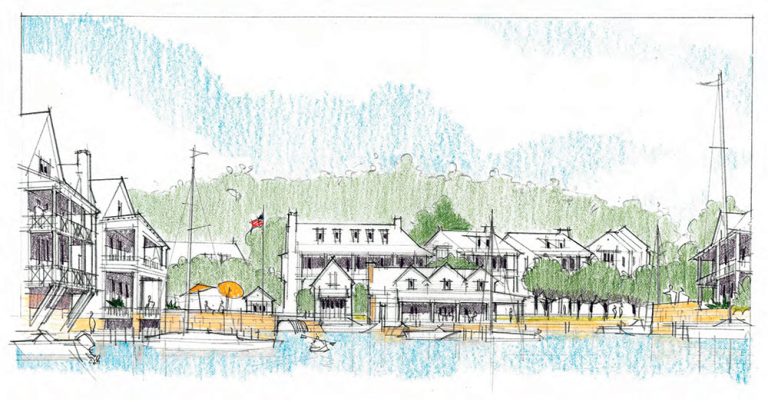 Muskegon Lake has always been an economic engine for West Michigan, dating back to fur traders and then a thriving lumber and paper mill era. In fact, most of the lumber was cut and shipped from Muskegon to rebuild Chicago after that city’s famous Great Fire of 1871.

Then came the 1900s and the industrial era, and Muskegon Lake was marketed as an attraction to industries with big foundries that use a lot of water. By the mid 1980s, Muskegon Lake was designated as a federal Environmental Protection Agency “area of concern.”

“Downtown Muskegon years ago was actually constructed to not even face the lake so that people wouldn’t see how dirty the lake was all the time,â€ says Erin Kuhn, executive director of the West Michigan Shoreline Regional Development Commission. “However, that thinking has totally changed, and the lake is now a key attraction. The city has done a wonderful job redeveloping downtown Muskegon, and I think there is really a direct connection between the environmental work happening on Muskegon Lake and the resurgence of downtown Muskegon.”

Environmental work began in earnest in 1993 when the Muskegon Lake Watershed Partnership formed to raise money and go after grants to conduct large scale cleanup projects on Muskegon Lake. More traction took place in the early 2000s with the passage of the Great Lakes Legacy Act and then the Great Lakes Restoration Initiative, which targeted the biggest threats to the Great Lakes ecosystem and accelerated progress toward long-term cleanup goals.

Kuhn says Muskegon Lake today features the return of birds and vegetation growth, and fish and pollywogs have also made a comeback.

“To date, more than $70 million has gone toward cleaning and revitalizing Muskegon Lake,â€ Kuhn says. “The major foundries and industries that lined the shoreline 50 years ago are gone, and now that the cleanup has been occurring, there are large tracts of land that are ready and ripe for redevelopment. I don’t know if there are any other places in Michigan – and the entire country, for that matter – where the entire landscape of an area has completely changed like this.”

Another area waterway that has undergone improvement is White Lake, once the site of a tannery and other manufacturing, which is now a beautiful setting for the Tannery Bay residential community.

As for Muskegon Lake, it is also attracting a mixture of residential and environmentally friendly commercial development and more opportunities for recreation are blooming.

“Reclaiming the lakefront and the water itself has been hard work, and that has left Muskegon Lake with literally hundreds of acres of re-developable waterfront property,â€ says Frank Peterson, Muskegon city manager. “Most waterfront communities have maybe a couple of available lots to build a house or two, but here we have enough land to construct entire planned neighborhoods that will shape our lakeshore for the 21st century.”

Neighborhoods currently in the process of development include Terrace Point Landing, Hartshorn Marina Village and Windward Pointe. Also planned is a mixed-use community called The Docks, which will be located close to Pere Marquette Park, and Peterson says several other neighborhoods are in their infancy construction stages.