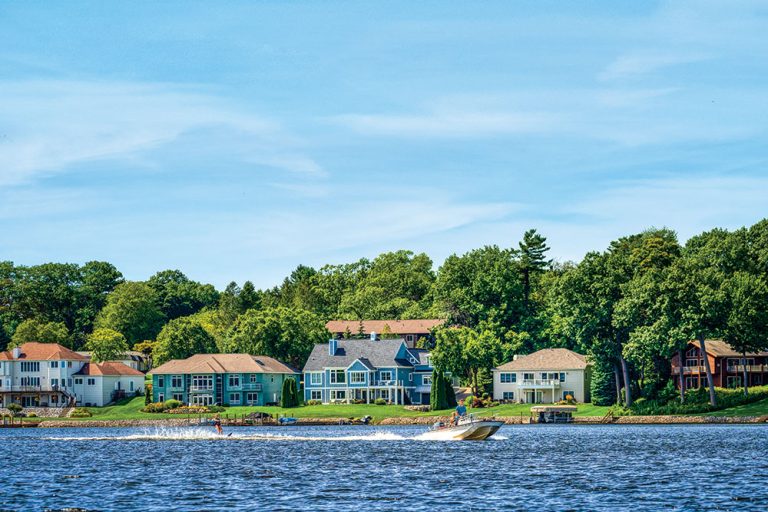 Easy, breezy and sunny lakeshore living gives way to crisp colorful fall leaves tumbling along into a crystalline winter wonderland that eventually warms, thaws and erupts into a dazzlingly green spring. And repeat.

Natural beauty perfectly showcased by four distinct seasons could be reason enough to draw people here. Add affordability, great schools and plenty of arts, culture and recreation, and one begins to scratch the surface of what’s driving the tremendous development, transformation and growth of the entire lakeshore region.

Muskegon County has long been regarded as a tourism destination whose economy flourishes primarily in the summer months, but that impression is changing, thanks to significant investment and development over the past several years. A huge amount of this momentum is seen in downtown Muskegon, and other communities in the region are seeing their share as well.

“Chris and I formed Great Lakes in 2015 when we noticed that things were starting to happen in Muskegon, and we could see that there would soon be a demand for marketrate housing,â€ Canale says. “We thought Lake View Lofts Phase I could be a snowball catalyst for more construction development, and that looks to be the case.”

Lake View Lofts Phase I has BoomTown Market on the first floor, Revel Marketing on the second, and 20 apartments are on floors 3-6. All apartments are leased and occupied.

“As for Foundry Square, it will feature highlights like an 86-room Microtel by Wyndham hotel, an eight-lane Brunswick bowling alley, a public plaza and family apartment housing or townhomes,â€ Canale says. “All ages are becoming interested in downtown Muskegon these days, including millennials, young professionals, empty nesters and retirees.”

Invest Ahead of the Curve

Another developer investing in the region is Port City Group, which is renovating old properties for commercial use in downtown Muskegon. Owner John Essex has invested more than $5 million in the district since inheriting Port City Group from his father in 2015.

Meanwhile, developer Jon Rooks of Parkland Properties has had a big role in transforming Muskegon, even moving his home and offices there.

“I grew up in Grand Rapids and always loved Lake Michigan and waterfront  property, and I knew after college that developing waterfront property would be a big part of my future,â€ Rooks says. “I grew my company by baby steps and am now involved with many waterfront properties in nine West Michigan communities.”

Rooks says investing in Muskegon these days is a classic opportunity to invest ahead of the curve.

“I like to impact invest, which is helping a community while also making a profit,â€ he says. “I like my projects to be catalysts to help communities advance, and all my projects have been successful so far. On the Muskegon Lakeshore, I’m very much focused on hospitality and residential projects.”

“The current exciting news in Muskegon is that a convention center is being built, because city officials want Muskegon to become a destination throughout the entire year instead of only during the summer months,â€ Rooks says. “For the Muskegon Lakeshore to thrive in the future, this region must become a destination where many people live and where visitors spend money all year.”