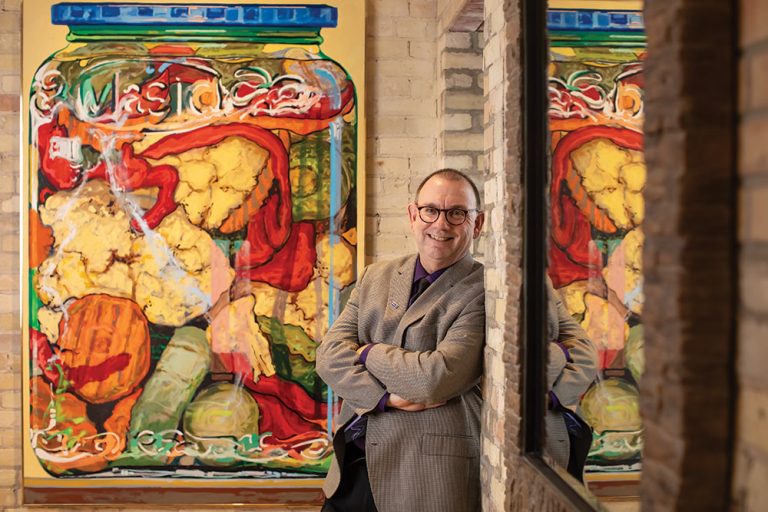 Not many communities of its size can boast the concentration and caliber of arts like the Muskegon Lakeshore. Visitors can experience a wealth of visual and performing arts at world-class venues like the Muskegon Museum of Art, the Frauenthal Center, the Lakeshore Museum Center and The Block. Arts also permeate the region with cultural institutions such as the James Jackson Museum of African American History in Muskegon Heights. But these entities cannot exist without the support of the greater community, and the arts are woven into nearly every aspect of life in Muskegon.

The community has a long-standing tradition in support of the arts. A prime example is the legacy of industrialist Charles Hackley, who sought to pivot the city when the town’s sawmills began closing up shop toward the turn of the 20th century. After the Hackley Public Library opened in 1890, he established the Hackley Picture Fund, which sought to acquire works of fine art for Muskegon. The collection outgrew the library, and in 1912, the Hackley Art Gallery opened its doors. A $1.6 million addition also saw a name change to the Muskegon Museum of Art, and the facility continues to serve the community as a cultural resource.

But art isn’t constrained to the indoors along the lakeshore. Within the downtown area, there are currently 48 works of public art, ranging from representational to abstract, spanning more than a century of creative work made by local, state, national and international artists.

Beautiful murals popped up on the side of the Blended Furniture Market building in Norton Shores and on a wall for Fatty Lumpkins Sandwich Shack in Muskegon. Local artist Jubenal Rodriguez created a mural on the corner of Monroe Avenue and Third Street in Muskegon. In the White Lake area, the community has installed public art along the bike trail.

The use of public art to enhance placemaking and drive economic development is so important that in 2018, business and philanthropic leaders created the Muskegon City Public Art Initiative (MC-PAI) to expand its impact. Under the direction of Judith Hayner, MC-PAI will commission 10 new substantial works of public art that help share the history of the community.

“We believe that public art brings communities together, reduces isolation and contributes to a sense of safety, care and pride within a community,â€ Hayner says. “Many communities have experienced local regeneration, thanks to art projects that inspire people to take pride in their surroundings and create community spaces for all to enjoy. It encourages people to stop, ponder and enjoy, and perhaps to be inspired by the human need to create and express.”

Mastodons on the Loose!

One recent example of how public art is telling Muskegon’s story is a special exhibit featuring one of the region’s oldest residents. Modeled on the fossilized remains of a female mastodon that is part of the permanent collection at the Lakeshore Museum Center, “Mastodons on the Looseâ€ has placed 20 miniature mastodons hidden in and around downtown Muskegon. The scavenger hunt has been a hit with residents and visitors, and a boon to the participating businesses. The next installation, “A City Built on Timber,â€ will celebrate Muskegon’s heritage built in the sawmills.

Another way arts and history enrich the Muskegon Lakeshore community is through the James Jackson Museum of African American History.

“Our museum intends not to be just a place where people come to view exhibits,â€ says William C. Muhammad, president and board chairman of the museum, which is located in Muskegon Heights.

“This museum is an educational institution that would not only bring Black history to life, but also become a source of pride to the community. It is a place where African Americans can learn how to appreciate with swelling pride their ancestors’ creativity and contribution to the making of America from the beginning.”

Making the arts accessible is more than just a slogan for the West Michigan Symphony. Since taking the helm of the nonprofit in 2018, Andy Buelow has pushed the arts organization out of the box and into The Block. Within this intimate performance space, new relationships are forged between the performing arts and the local community.

“What’s unique and special about The Block is that it’s not a concert, it’s not a recital, it’s a shared listening experience,â€ Buelow says. “With The Block, our artistic footprint has expanded from one- to multidimensional, encompassing classical, folk and jazz. But we do it in a way that shows how these different forms of music are interrelated.”

The Block enabled West Michigan Symphony to expand its youth programming, adding Debut and Premier Strings youth orchestras, a Children’s Choir and a story-time series for toddlers. Buelow says performing arts are an integral component of economic development because of their ability to enhance the vibrancy of a city. The arts hone a community’s cultural identity, which enhances the quality of life for residents and, in turn, drives talent attraction.

“The arts are community builders, and a sense of community, more than anything else, is what attracts people to relocate to a city,â€ Buelow says. “Institutions like the symphony, the civic theater, the libraries and museums may attract tourists, but they are here primarily for the residents. They are gathering places that bring people downtown – they give it life. And of course, we thrive on that as organizations.”