Why I Love My City: Traverse City, MI

Here's what 3 Traverse City residents had to say about working, living and playing in this unique northern Michigan city. 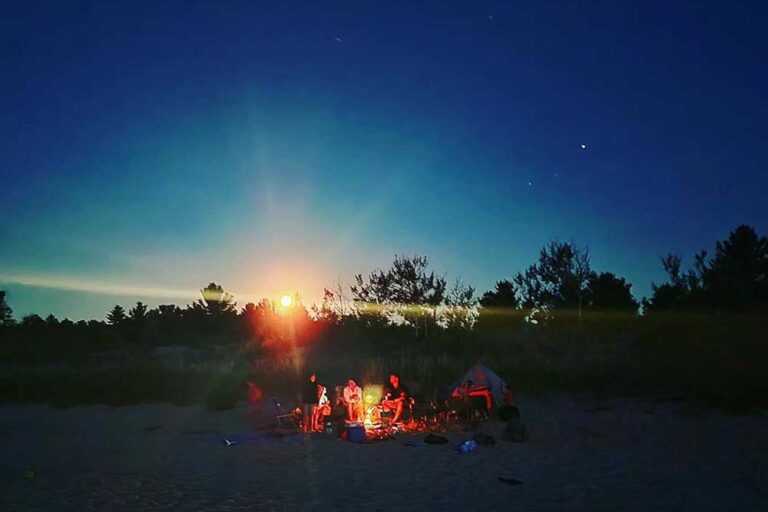 Traverse City attracts inspiring people — residents, visitors and business owners alike. A city that offers a permanent vacation and a slower pace of life but access to all the things necessary to build your dreams. Traverse City is the place for you if you’re looking for the perfect combination of small-town eccentricity, from sustainability to kind people and community engagement to big-city culture and unlimited possibilities.

One great city. Three fascinating people. Nine questions about life, food, culture, and the city’s unique characteristics. Here’s what they had to say about why they love Traverse City, Michigan.

How did you end up in Traverse City?

Duda: “​​I didn’t have any connection to Traverse City before purchasing my first Airbnb here. I originally purchased the property to flip it but thought it was a great place to be. I fell in love with the town. So, I moved up here when I finished my personal Airbnb.”

Sawchuk: “I grew up coming to my cottage in the summertime. I’ve always loved the area. I came back in the summer of 2020 and thought I’d return to L.A. in the fall, but it was so gorgeous up here. I reconnected with an old friend who is now my husband. And the rest is history.”

Meza: “I was given an opportunity to move to New York and work for an agency — it was the dream, in my opinion. But I found Traverse City from a mutual friend, and after visiting, I moved five months later.”

What are some of your favorite things about Traverse City?

Caribbean-like water, a captivating fall season, crisp winters, and refreshing spring weather enable an experience like none other in Traverse City, says Sawchuk. “I also love the amazing restaurants with farm-to-table food.”

The small things in life matter, and in Traverse City, they’re right at your fingertips. Every Tuesday, Meza stops at a farm and picks up a bushel of organic vegetables.

“We have a young family, so we’ll often order carry-out and have a picnic in the sand on an awesome beach,” Meza says. “We’re positioned in the western part of the eastern time zone, so in the height of summer, I take advantage of that. I am a big golfer — I also love disc golf. Some of the best golf courses in the world are in our backyard.”

Everyone values quality over quantity in Traverse City, says Duda.

“The food scene is fantastic. All the farms and farmers are doing incredible things — access to fresh produce is one of the best parts. There are outdoor activities from every angle. The creative hub is expanding because of the ecosystem of makers and doers — attracting super talented and interesting people. But there’s this overall commitment to quality and keeping things local.”

Why Entrepreneurs, Tech Start-ups Are Flocking to Traverse City, MI

The vibrant entrepreneurial ecosystem is complemented by a supportive community.

Access to live music is important to Meza — something he thought he would give up after leaving the big city. But he quickly realized he didn’t have to go far for the exhilarating experience.

“I can easily travel to Grand Rapids or Chicago, but there are plenty of opportunities here for live music and shows at the Interlochen Center for the Arts, the National Cherry Festival, museums and the Traverse City Film Festival.”

Traverse City is known for the picturesque scenery and plentiful activities in all four seasons. “Participating in outdoor activities is a way of life here,” Duda says. “When I lived in Grand Rapids, I only met friends for drinks. But instead of that (or alongside that), we do something outdoors. It feels a lot more active. Everyone I’ve met here fits into that lifestyle and has become a big part of my life.”

How does living in Traverse City support your career?

The Traverse City community is known to be supportive at every stage of a person’s career, and residents agree.

“All the local business owners and people doing inspiring things didn’t have to say ‘yes’ to my interviews, but they took the time and they invited us in,” Sawchuk says. “There’s also an amazing work-life balance. When you’re done working, you’re in paradise — you’re already on vacation.”

A hot spot for remote working and entrepreneurship, Traverse City is quickly becoming a technology hub, attracting tech nomads from both coasts. And its tourism sector is still going strong and growing.

“It’s a city where, if you can dream it, there are all the resources to make it happen,” Duda says. “In just about every sector, especially for people that want to launch their own small business. It feels like a welcoming place to start and a supportive community.”

What resources have you used to help you acclimate to Traverse City?

Dreams are not only dreamt but supported in Traverse City.

“The people here are a fantastic resource. If you have an idea, it’s possible to make it happen here. It’s a great place to start a business,” Sawchuk says, “I’ve also used Michigan’s Creative Coast. Their mission is to connect people. They’ve been a great resource to help me become a part of the community and network.”

What’s it like to raise a family in Traverse City?

Raising a family in Traverse City is everything you’d imagine it to be.

“My kids grow up in an environment that feels like a Lifetime Movie of the Week. Everyone here is happy. It’s a small town. People wave at you while driving through the neighborhood,” Meza says. “Raising a family here is great. The landscape is incredible. My kids go to school and go on hikes (as part of class).”

What is something you can only get in Traverse City that you couldn’t get in your previous city?

Big cities have unlimited possibilities, but so does Traverse City.

“When you live in large cities like New York City or Los Angeles, it’s hard to feel like you’re part of the city’s civic-minded canvas,” Meza says. “Here, if you want to get involved, you can pick your cause — whether government, politics or school boards — you can make an impact in a way you can see. “

What’s it like traveling in and out of Traverse City?

Traveling can be readily available, but also cumbersome when you live in a big city. For Traverse City, you get the best of both.

“It’s so easy to travel out of here — the Cherry Capital Airport is great,” Duda says. “I like the small airport, and you can get everywhere. It feels like this is the smallest city I’ve lived in, but I can get anywhere, and it doesn’t feel limiting in that way.”

How would you explain Traverse City in one word?

“Easy,” Meza says. “Life is a lot easier here — ‘adulting’ and life generally is more manageable. When you come from big cities, everything feels hard, but that’s not the case here.”

“Connected,” Duda says. “I’ve been to a lot of places, and it just feels like I connect with Traverse City on so many levels. When I leave here on a trip, I’m always so happy to get back. There’s nothing that leaves me wanting more now.”

“Purposeful,” Sawchuk says. “People here are incredible. My business focuses on doing good while having a good time, paralleling this work-life balance. A lot of the things people are doing here are good things beyond just starting a business — everyone has goals besides just making money.”

This article was sponsored by Traverse Connect.