Discover how Minnesota's clean tech industry has taken a leading role in harnessing the renewable power of wind, sunshine and biofuels. 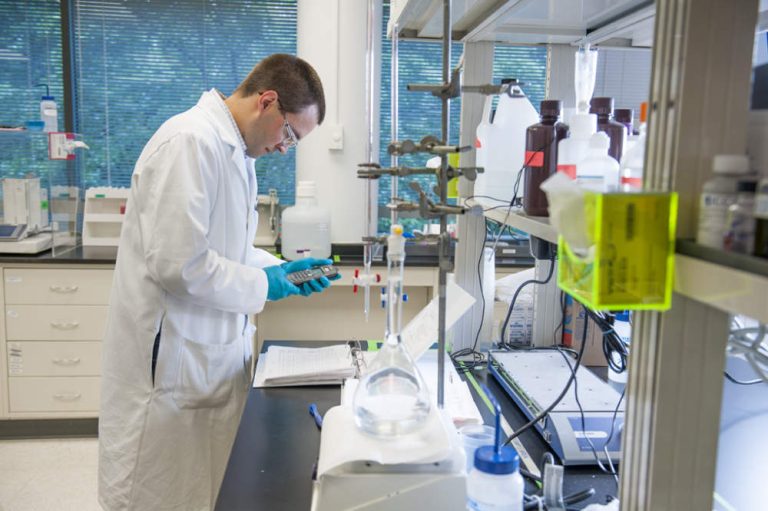 When it comes to harnessing the renewable power of wind, sunshine and biofuels, Minnesota’s clean tech industry has taken a leading role in developing the sustainable products and energy sources of the future. The state’s clean tech industry is bolstered by a superior transportation infrastructure, a deep pool of skilled workers and a collection of specialized manufacturers that provide the supply chain to support clean energy development.

“There are many advantages in having a company presence in Minnesota,” says Roman Blahoski, a spokesman for Ecolab. Ecolab is part of a growing clean water technology cluster in Minnesota. The state ranks eighth nationally in foreign sales of water technology exports, as defined by the U.S. Department of Commerce. The St. Paul-based company is a global leader in clean water, hygiene and energy technologies, and services that protect people and resources. The company’s 47,000 associates work to promote safe food, maintain clean environments, optimize water and energy use, and improve operational efficiencies for customers in the food, health care, energy, hospitality and industrial markets in more than 170 countries.

“Minnesota has a great education system and is home to numerous universities and vocational schools, which provide businesses throughout the state with a well-educated and skilled workforce. Quality of life in Minnesota also ranks high, making the state an attractive location for both businesses and employees, which is evident by the 19 Fortune 500 companies that call Minnesota home.” Blahoski says.

For Minnetonka-headquartered NatureWorks, Minnesota is an ideal location, says Steve Davies, director of corporate communications and public affairs. “We are a global company, a leader in the bio/green revolution. Minnesota is a great location for us,” he says. With advantages including the University of Minnesota, housing prices that are relatively low compared to other tech centers, and numerous cultural and recreational opportunities, the state is a destination for skilled professionals looking for a good quality of life, Davies says. NatureWorks makes a family of biopolymers derived from 100-percent-renewable resources. It targets applications in packaging, food service ware, durable products, fibers and non-wovens, films, 3D printing filaments, and other areas for its Ingeo biopolymer. The product is competitive in terms of performance and price. And, for its customers, the idea of using a sustainable product with a small carbon footprint is appealing. Gary Hirschberg, chairman, president and CEO of Stonyfield Farm, is a fan of Ingeo, which replaces polystyrene in yogurt containers the company uses. “It’s a win-win-win-win. It’s price-neutral, a big win on carbon and a much stronger package. It’s not perfection, but it is a giant leap,” he says.

Minnesota is a wind energy leader, with 3,035 megawatts of installed capacity. It ranks eighth in the nation in installed wind capacity – and it’s also a leader in manufacturing related to wind energy. More than 20 companies in the state produce wind-related components. Two of the nation’s largest wind farm builders, M.A. Mortenson Construction and D.H. Blattner, are located in Minnesota. To maintain pace with the company’s rapid growth, in 2015, Blattner Energy, a D.H. Blattner affiliate, announced the renovation and expansion of its headquarters in Avon, including an addition with about 23,000 square feet of space. Like the original headquarters, the new space will promote sustainability and efficient energy use, including an electric car charging station and geothermal HVAC system. Blattner Energy will continue to power a portion of its campus from wind and solar energy produced on site.

“The wind industry helped fuel our past growth, but now we’re seeing increased demand for our services within other areas of the renewable energy field,” says Scott Blattner, president of Blattner Energy. “We’re delighted to expand our headquarters to fit our growing needs.” With an annual average of 2,509 hours of sunlight, Minnesota has good conditions for solar development. The state has cumulative solar capacity of more than 14,000 kilowatts and new solar installations are growing steadily. Given its agricultural strengths, it’s not surprising that Minnesota is a leader in biofuels and biomass innovation.

The state has 22 ethanol plants in operation and was the first state to require a 5 percent biodiesel blend in most diesel fuels. Minnesota’s ethanol industry accounted for $2.34 billion of the state’s GDP in 2014, according to a study for the Minnesota Bio-Fuels Association. The industry generated $7.6 billion in gross sales for Minnesota businesses and supported 18,630 full-time jobs in the state in 2014. “This study clearly shows how significant the ethanol industry is to Minnesota’s economy, especially in rural areas where it supports other industries,” says Tim Rudnicki, executive director of the Minnesota Bio-Fuels Association.