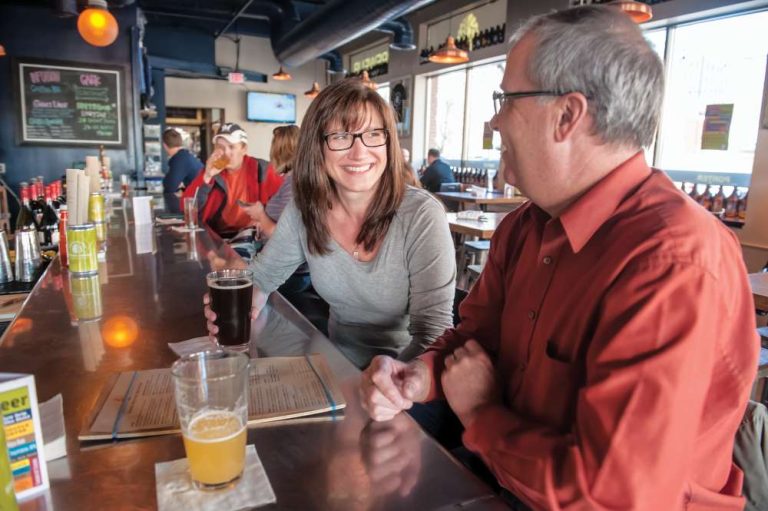 As Rochester further diversifies its economic base, breweries will continue to contribute not just from the retail perspective but by bringing the community together over the “clink-clink” of beer mugs.

Grand Rounds Brewing Company celebrated its first anniversary in April 2015. Chief Operations Officer Tessa Leung says the business is about more than just creating great product but bringing people together in the taproom.

“We’re a gathering place and a crossroads,” Leung says. “We see everyone from families to community groups to Mayo Clinic patients and other out-of-town visitors. Anyone is welcome to come and enjoy locally sourced food and locally brewed beers. Community groups often use the brewpub to host events and meetings, and we help with a lot of community fundraisers. We even collect food for the local food bank as part of our monthly brewery tours.”

Annie Henderson, who owns Forager Brewery, says that while she just opened up shop in 2015, she already has enough business to stay extremely busy.

“It is so rewarding to be a member of the Rochester community. We have been very welcomed and met so many wonderful, like-minded community members,” Henderson says.

She adds that the connection with the agricultural community is one reason they’ve successfully built a customer base.

“We promote sustainable farming, farm-to-table food, provide a venue to connect with the local farm community and encourage and reward healthy lifestyles of walking and biking,” Henderson says. “I believe we connect with people that have a similar passion for fresh ingredients, foraging and wanting to be part of a smaller community.”

The brewing business also shares traits with farming, such as an emphasis on cooperation, even among competitors.

“I think one of the greatest things is how collaborative and helpful most of the other breweries are,” says Brandon Shultz, co-owner and brewer at LTS Brewery. He says, much like a farmer who helps a neighbor change a tractor tire, “I try to return the favor. When fellow brewers need to borrow something at midnight before brew-day, I’ll try to help them out. It takes time — something I don’t have much of already, but it’s worth it.”

Donovan Seitz, owner and lead brewmaster of Kinney Creek Brewery, shares the sentiment. He says sharing best practices with fellow brewers is a highlight of the industry.

“As an example, [recently] Kinney Creek went up to Duluth with the Minnesota Brewers Guild for All Pints North. There were over 200 people from breweries across the state in one area, along with some of the larger national breweries,” Seitz says. “Anytime brewers get together and see each other we always talk shop. [And] everyone has an open door position, which is awesome.”

The craft beer industry has connected especially well with a young demographic. While businesses spend millions on advertising to attract millennials, craft beer inherently resonates with them.