This St. Louis suburb is getting noticed for its high quality of life 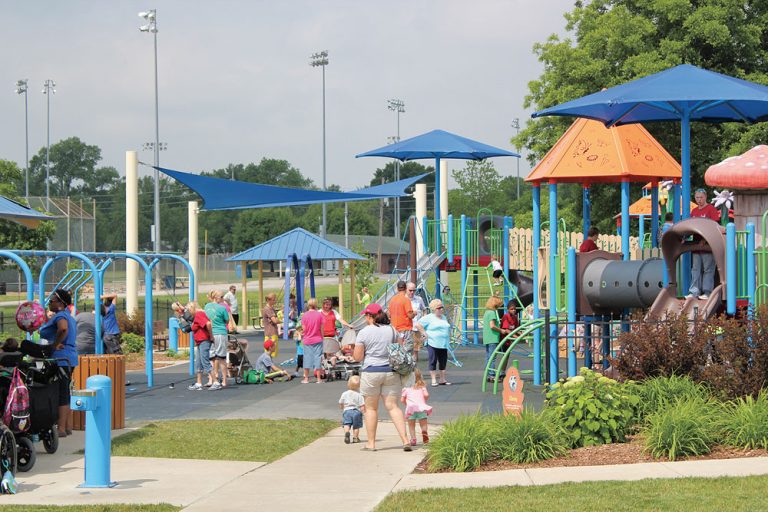 O’Fallon, Mo. is a nice place to call home – and it’s easy to understand why. Its proximity to St. Louis, bevy of both public and private amenities and affordable housing, make it a popular destination for families.

A Sense of Belonging

And it’s safe to say this St. Louis suburb is no longer one of Missouri’s best-kept secrets. The city made Money magazine’s list of 100 “Best Places to Live” in 2017.

This comes as no surprise to Alyssa Groeteke, recreation coordinator at the Renaud Spirit Center (RSC), and Tom Drabelle, the city’s communications director. Both see families reaping the fruits of putting down roots in O’Fallon.

Drabelle said the community of about 86,000 is a magnet for families with younger children, due in large part to the “fantastic” school system. Great schools are the result of great neighborhoods, of which O’Fallon has many. And home ownership is accessible, too. In St. Charles County, the median home price was about $210,000, according to his data. In other words, O’Fallon is highly livable.

“It’s a great place to be,” Groeteke says. “There’s so many activities. It has a clean and safe feel and it’s easy to feel a part of (the community).”

Groeteke cited the RSC as an example of one of the many resources that make O’Fallon such a great place to raise a family. The RSC is a 66,000 square-foot facility that “all ages can enjoy.” They cater to senior citizens as well as patrons as young as six months. The center touts extensive programming in aquatics, sports, fitness and wellness, she says.

In the same vein, O’Fallon’s parks system is impressive in its own right. “They offer a variety of amenities according to interest,” Groeteke says.

For example, Alligator’s Creek – an outdoor aquatics center located in Civic Park – is a great place to cool off on a hot summer day. A spring diving board, a relaxing lazy river and water slides keep the area’s kids occupied for hours.

Additional amenities within the city limits include seven parks spanning 450 acres, picnic pavilions, playgrounds and a skate plaza, among other things. Drabelle said Brendan’s Playground, an all-inclusive space in Westhoff Park, is among the “shining jewels of the parks system” because it allows kids of all abilities to play side by side.

Fort Zumwait Park is a gem of a different kind. Rich in history, this scenic park showcases a rebuilt War of 1812 fort site, Zumwalt’s Fort. “It really goes back to the history of the area,” says Drabelle. This revamped structure opened in 2015 as a gift to the city from the O’Fallon Community Foundation. It is the only rebuilt War of 1812 settler fort in the state.

The 9-11 Memorial commemorates history in the more recent past. On September 11, 2005, the City of O’Fallon dedicated a 17-foot memorial to America’s fallen first responders. Inside City Hall, a section of the World Trade Center’s red steel core is displayed in a case. Also not to be overlooked is the historical society’s Log Cabin Museum, which contains artifacts pertaining to O’Fallon’s early history.

According to Groeteke, all these facilities and amenities contribute in no small part to the area’s quality of life.

“Recreational opportunities strengthen the fabric of the community because our parks and recreation center are places people can come together to exercise, enjoy the outdoors, and spend time with their family and friends.”

Hosted in the parks, the city’s lineup of free festivals and events bring the community together. combines two of those activities. According to Drabelle, one well-attended festival in particular has earned a reputation for being beloved. “Our most popular festival is Heritage and Freedom Fest, which is the city’s three-day Fourth of July celebration. This long-standing tradition draws between 100,000 and 150,000 people annually.” Other notable festivals include Celebration of Lights, Fall Fest & Street Dance (and run), Food Truck Frenzy, Founders’ Day & Garden Expo, Heritage and Freedom Fest, O’Fallon Jammin’ Outdoor Concert Series and the Firecracker Fourth of July Run.

The River City Rascals, a Frontier League professional baseball team, draws large crowds too. Ozzie Smith Park contains CarShield Field, home of the River City Rascals minor league baseball team. The team has been playing at CarShield Field since 1999 and has engaged the community over the years through outreach initiatives like donations to charities, a kids club and senior citizen memberships.

All told, it’s safe to say that O’Fallon lives up to its motto of “Tradition with Vision.”

When locals aren’t enjoying one or more of these amenities, they enjoy taking in a meal or beverage at one of the city’s many establishments. Being close proximity to St. Louis and its German heritage, O’Fallon residents enjoy a beer or two in addition to to savoring American or Irish inspired eats. Rendezvous Café & Wine Bar caters to a gamut of tastes. Breakfast, soups, salads and sandwiches delight. Bonus: They have coffee shop so diners can get their caffeine fix as well.

McGurk’s Public House is much more than your local watering hole. The destination has earned a reputation for one of the best of its kind in St. Louis. Come for the food and stay for the Irish music and the 15,000+ square foot outdoor garden. Similarly, Llywelyn’s Pub welcomes guests with a Celtic film and family-friendly atmosphere. An added bonus: They offer beer and whiskey education so you can impress your friends.

Tully’s Taproom is a nice suburban sports bar. They have several beers on tap and multiple large-screen TVs ideal for viewing games. Also a bar, Timber Creek Grill claims to have the most comfortable bar stars. Grab a seat and enjoy a wide menu including appetizers, sandwiches, pizzas, burgers and entrees. Sugar Fire Smoke House is a carnivore’s dream. Smoked meats like brisket, pulled pork, turkey, ribs, sausage and ribs hit the spot. Top it off with a home-made slice of pie.