9 Reasons to Move to Springfield, MO

Springfield: A well-rounded city that continues to build on its glowing reputation. 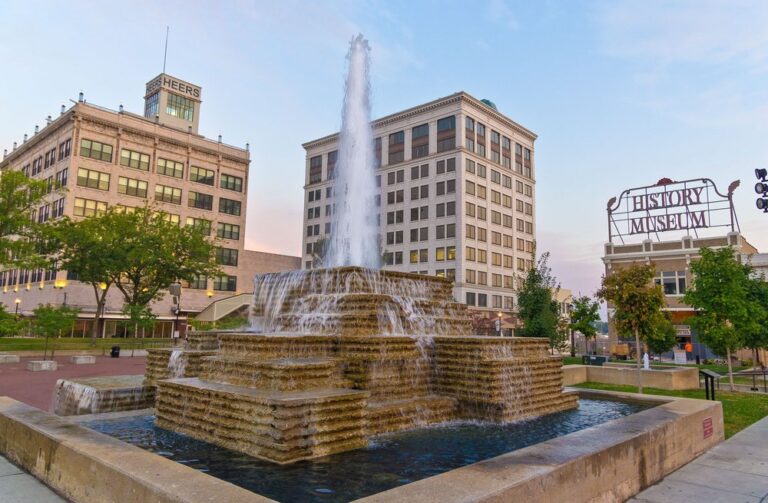 Springfield is sometimes referred to as “the Queen City of the Ozarks” or “the birthplace of Route 66,” but though the city is rich in history, its best days appear to be ahead. Located in the southwest corner of the state, roughly equidistant between St. Louis, Kansas City and Tulsa, Springfield combines a small-town vibe with the energy of a college town and amenities of a big city. Better yet, the cost of living is approximately ten percent below the national average, and the local economy—anchored by the health care industry and major retailers like O’Reilly Auto Parts and Bass Pro Shops, both headquartered here—is well-positioned to continue its steady, reliable growth. Residents enjoy four distinct seasons and a wealth of outdoor recreation opportunities. No wonder that more and more people are moving to Springfield.

1. Gateway to the Great Outdoors

Springfield/Greene County is blessed with more than 100 parks, including downtown gem Jordan Valley Park and nearby Lake Springfield Park, the latter ideal for kayaking and canoeing. The city is also especially friendly to cyclists, with a broad array of bike paths, trails, and greenways both in and outside of town. Countless lakes and streams make the area especially popular with fishermen, who enjoy landing bass and trout as well as fly-fishing.

There are also things to see below ground. Missouri is known as “the Cave State,” for the thousands of caves found (mostly) in the southern half of the territory, 18 of which are open to the public. But Springfield boasts unique subterrain. Fantastic Caverns is the only Missouri cave that offers a drive-through tour, a 55-minute Jeep-drawn tram ride where one can see—per the official website—“cave formations that include stalactites and stalagmites, tiny soda straws, cave pearls, [and] massive columns and flowstones, each like no other.”

Springfield also boasts more than its share of one-of-a-kind eateries, all revered by locals. There’s historic Gailey’s Breakfast Cafe, a former drugstore soda counter, as well as the old-school “dive” Pappy’s Place, which is frequented by barbecue devotees. Last but not least, there’s Casper’s, a small burger and chili joint found inside a Quonset hut. “You’re not a Springfieldian until you’ve eaten at Casper’s,” claims one Trip Advisor reviewer.

In recent years craft spirits and beer have become a larger and larger part of the local food and beverage scene. Mother’s Brewing Company, Springfield Brewing Company, White River Brewing Company, and Missouri Spirits are preeminent as all are in Springfield proper. Other tours and tastings are within easy driving distance, namely Stone Hill Winery and 7Cs Winery and Meadery, the latter just 30 minutes northwest of downtown.

While there are plenty of attractive neighborhoods in and around Springfield—including Phelps Grove, named one of the South’s best comeback neighborhoods by Southern Living magazine—the downtown area is arguably the most compelling part of town in which to live, thanks in part to the preponderance of unique shops, restaurants and vendors in the area. Consider Kingdom Coffee and Cycles (a combination coffee and cycle shop), and Mudhouse Coffee, to name but two.

If you’re looking for national retailers, consider Battlefield Mall (the name comes from the Civil War Battle of Wilson’s Creek), which boasts 134 stores. Another attraction is the 500,000-square-foot flagship store of  Bass Pro Shops, which features two museums: the NRA National Sporting Arms Museum and the Archery Hall of Fame.

The local professional sports scene is headlined by the Springfield Cardinals, the Double-A affiliate of Major League Baseball’s St. Louis Cardinals. The team plays its home games at 8,000-seat Hammons Field in the heart of downtown. Missouri State University and Drury University teams are at the center of a robust college sports scene, while an enviable array of sports complexes and recreational centers make it easy for the average citizen to stay active, have fun and remain healthy.

The community’s emphasis on health care, wellness and education has helped spawn one of the most intriguing educational programs in the city. The Health Sciences Academy at Mercy Hospital provides 50 Springfield Public Schools eighth-grade students the opportunity to spend a year at Mercy, “learning through the lens of health sciences in specially designed state-of-the-art classroom facilities.”

According to liveinspringfieldmo.com, “Health care is our city’s number-one growth industry, employing about 17% of our total workforce,” making the Health Sciences Academy a representative example of how local leaders are creating a bright future for individual residents and Springfield at large.