Skip to content
Home > MO > St Louis > Love Where You Live > Living the Dream: I Left My Corporate Job and Opened an Ice Cream Shop 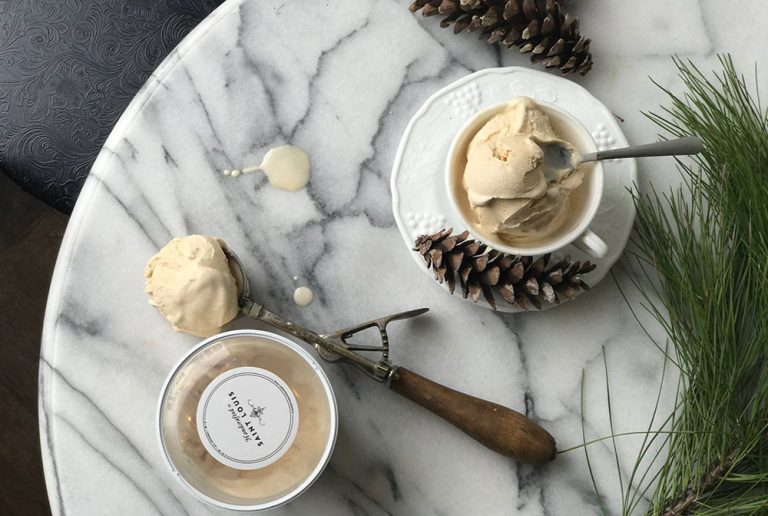 Clementine’s Naughty & Nice Creamery opened in 2015, and almost instantly became a St. Louis obsession, with four-hour wait times(!) on the weekends. Visitors and residents alike can’t get enough of the creamery’s locally sourced, house-made ice cream. The company’s founder, Tamara Keefe, never planned to live in St. Louis, let alone become a local ice cream icon – here, she tells Livability about making the decision to leave corporate America, the evolution of Clementine’s, why vanilla is the best ice cream flavor, and how her business couldn’t have thrived without a little “St. Louis magic.”

Where are you from originally, and how did you come to live in St. Louis?

I was born in Denver, but raised on the beach in Southern California from primary school on. After my B.A. at Pitzer, I studied Jurisprudence and Ethics at Oxford University and went on for a MBA from the Drucker School at Claremont Graduate University. While in grad school I was recruited to work for Dupont, then in 2008, relocated me to St. Louis to work in Global Business Development.

What was your first impression of the city, and how has that changed over time?

I am embarrassed to say, but I didn’t want to move to St. Louis in the beginning, and quite frankly I wasn’t really sure where it was on the map. I knew it had the Arch, but that’s pretty much it. It was a flyover state as far as I was concerned, and not a place that I was interested in going to, moreover relocating to. It took some coercing, but I finally gave in with a commitment of two years and a promise of greater opportunities if I went where the organization needed me. So literally I came kicking and screaming to St. Louis. Little did I know within 6 months, I would find the one true love of my life…..St. Louis, and I will never leave.

The city is amazing! There is no greater example of tax dollars at work than in this city. The zoo is free, the museums are free, the science center is free, and 1500 seats to every performance at the Muny in perpetuity is free. Free concerts and programming all over the city and access to the arts is unbelievable! I was impressed by the food scene, the tech scene, the fashion scene, the beer scene, the music scene … this city has it all.

St. Louis is magical, it really is.

Where did the idea for Clementine’s originate? Had you always wanted to open an ice cream shop?

I’ve made ice cream my whole life since I was a child. It’s always been a hobby and passion of mine, so when I had enough of Corporate America I needed to do something different, something that was good for my soul and something I loved … and that was ice cream.

It was actually an epiphany with some girlfriends one morning over coffee at a lake house. I had broke down and was crying with my most intimate circle of friends, explaining that I was miserable. I, 38 at the time,  had traveled 262 days the previous year, was never home, never saw my family or friends, was without a family, unmarried and so very unhappy. My life needed to change.

It was my girlfriend who suggested I quit corporate America and make ice cream. As crazy as it sounded, I figured what was the worst thing that could happen? I might fail. Ok, well I knew I could go get another job, was highly employable, and had an amazing education. I had money in the bank and though I didn’t realize it at the time, I was more than ready to make the biggest bet of my life and that was on myself.

For people who might be unfamiliar, can you explain the concept of “naughty and nice” ice cream?

I developed and created a patent-pending, trade secret process for infusing alcohol into my ice cream up to 18%. We serve this “naughty” ice cream to our guests 21-years-of-age and older. It is actually an industry game changer.

Our “nice” cream is alcohol-free and made with the best all-natural ingredients; we start with our local cows which are grass-fed, pasture raised as well as hormone and rBST free. We capture the pride and transparency of this process in calling it “cow to cone.”

What was the process like of actually getting the shop up and running? What went well? What was more challenging than expected?

There are seemingly an infinite number of small and sometimes niggling details in getting a retail operation open and running seamlessly. I am very fortunate in having a partner, in life and love, with an extensive background in retail and restaurant operations. He also had lists … lots and lots of lists. In this area especially it makes a lot of sense to seek help from seasoned professionals through local networking and business associations.

My biggest challenge was the massive change in the demographic makeup of my team members. When I ran a $70 million dollar business in the liquid nutrition and protein space, 30-year-old MBAs were the core of my team. Our team members at Clementine’s range generally from 17-year-old scoopers to twenty-something store managers. I had to completely overhaul my management style; I would not have been able to do this without reading Danny Meyer’s “Setting The Table” and instituting his methodologies for enlightened hospitality.

What was the response from the local community?

It has been unbelievable! We still have four-hour lines on the weekends in the summer that never stop! My first year was insane. From May 17, 2015 through December 31 we had 57,600 people come through my little 500-square-foot shop in my neighborhood, Lafayette Square. We were ranked and picked as part of Yelp’s top 100 fastest growing companies in 2015. St. Louis has been so loyal and supportive and we couldn’t be expanding or growing without their love of us and our ice cream.

The Clementine’s website includes the line, “We are St. Louis proud.” What does that phrase mean to you?

Each and every day we are proud and honored for the opportunity to be able to make people happy by doing what we love. We are remarkably grateful for this gift that the St. Louis community has provided for us since May 17th, 2015. Each day we make St. Louis greater, we contribute and have helped put St. Louis on the national food scene for ice cream. St. Louis does so many great things!

How would you describe the current food scene in St. Louis?

Collaborative, supportive, and transformative; daily we are amazed by the power of significant and inventive food to change the cultural landscape in this city we love so much.

What advice would you give other people who might have a similar dream they’re trying to bring to life?

Twice as much and twice as long: plan on spending twice as much money as you originally thought for your first endeavor and make sure your runway is twice as long. In the beginning, I also decided that I wanted to avoid many pitfalls that other startups go through. I never wanted to be put into a situation of making a bad decision because of money or lack there of. So, I paid everything off for 2 years! Yes, my mortgage, my health insurance, my car payments, even my utilities. I wanted the freedom to work hard and make good decisions without money hanging over me. Best decision I ever made.

Perhaps the most important question: What’s your favorite flavor on the menu right now?

I am a classicist and a minimalist. My favorite flavor is always my Madagascar Vanilla; its simplicity and purity define elegance and sophistication. In the same way that a pizza connoisseur judges the skill and finesse of a pizzaiolo by her classic margherita, I size up the adeptness of my competition by his rendition of vanilla ice cream.

Thanks so much to Tamara for sharing her experience with us! Want to try Clementine’s for yourself? We recommend you plan a trip to St. Louis ASAP, but in the meantime, Clementine’s ice cream is available to be ordered online and shipped nationwide: www.clementinescreamery.com.