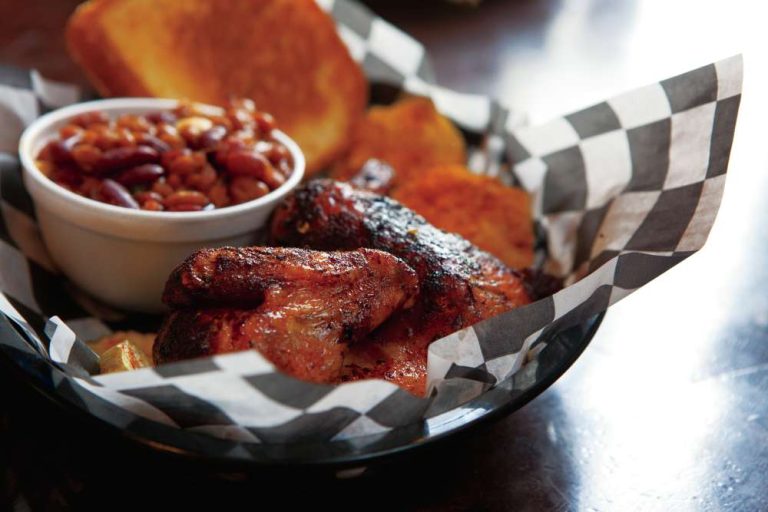 Barbecue wasn’t invented in Mississippi, but it was perfected here. Making the best barbecue is a matter of pride in Mississippi and a big part of the state’s culture and food scene. Whether you’re visiting Mississippi or planning to move here, you’ll find great barbecue restaurants and hole-in-the-wall cooks that will make you want to stay. We’ve identified six makers who have more reason than most to be proud of their barbecue.

Opened in Foundren in 2014, The Pig & Pint keeps its roasting fires burning 24/7 to consistently deliver competition-level barbeque. The Pig perfects its flavors through competition with the Slapjo Mama Championship BBQ Cooking Team in the Memphis Barbecue Network. Only half of The Pig’s trophies from this competition are on display at the restaurant because it ran out of room for the other half. Some of The Pig’s best items are its Pepsi-Cola glazed baby-back ribs, pulled pork BBQ tacos and Boudin Burgers. The Pig also caters to beer lovers with more than 60 varieties available.

The Shed BBQ & Blues Joint in Ocean Springs maintains a relaxed atmosphere and décor that makes having fun the highest priority. Live music is a key ingredient to that atmosphere, and performers like Rock Bottom, T-Bone Pruitt and Voo Davis play regularly on weekends. The Shed’s wood-burning smokers make any barbecue imaginable including specialties like rack of spare ribs and beef brisket plate. These attributes have cultivated a dedicated fan base known as ShedHeds and enabled The Shed to open an additional location in Gulfport.

Opened in Saltillo in 2008, Bishop’s BBQ & Grill has become a staple in northeast Mississippi. Its popularity allows Bishop’s to open seven days a week and has spurred growth into additional locations in Belden, Tupelo and Booneville. Bishop’s serves an expansive menu with a variety of barbecue meats including chicken, turkey, brisket, ribs, Polish sausage, pork tenderloin and pulled pork. With dedicated catering capabilities, Bishop’s welcomes the opportunity to deliver its delicacies to any special occasion.

Abe’s Barbecue has roots in the Delta dating to 1924. Its menu carries classics like loin baby-back ribs, Bar-B-Q pork plates and chili cheeseburgers, as well as grilled chicken salads and tamales. After World War I, Abe’s moved to its current location at the infamous crossroads of Highways 61 and 49, which has a special significance in the history of blues. Robert Johnson, once a mediocre blues player, is said to have sold his soul to the devil at this crossroads in exchange for an inhuman ability to play guitar. This legend arises from Johnson’s inexplicable overnight development of masterful musical abilities and his untimely death at 27, the cause of which remains unsolved.

With two hometown locations, Squealer’s Hickory-Smoked Bar-B-Que is a local favorite in Meridian. Squealer’s is best known for their pulled-pork sandwiches and desserts, and the Meridian Star’s Reader’s Choice Awards has ranked Squealer’s as “Best Barbecue” every year since 1998. Some of Squealer’s other specialties include the ham or turkey chicken salad croissant, Momma T’s fried pork chop sandwich and homemade Brunswick stew, which is made from a treasured family recipe.

Before Leroy “Spooney” Kenter Jr., was serving up his delicious smoked meats in Greenwood, he refined his talent and sauce in Kansas City. Kenter moved back to his home state in 1996 and opened for business in a narrow storefront on Johnson Street in downtown Greenwood. But in 2009, he downsized and dragged his smoker back to his old neighborhood, and now makes barbecue in front of his home in the historic Baptist Town. Finding Spooney’s is half the fun. The real experience comes from watching him work and, of course, sinking your teeth into the ribs he’ll pull right off the grill.