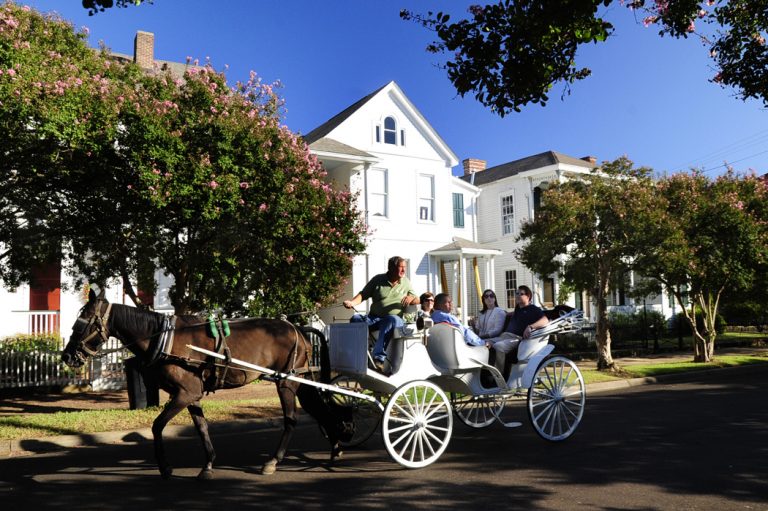 Natchez / Courtesy of the Natchez CVB

In 2016, Natchez celebrates 300 years as the oldest continuous European settlement on the Mississippi River. In fact, Natchez is two years older than New Orleans and a year older than the entire state of Mississippi, so the community is well positioned at the forefront of southeastern history. The tricentennial is as important an anniversary for the region as it is for Natchez, says Jennifer Ogden Combs, Tricentennial Commission executive director.

“We really have looked at this as our mission to bring the community together, to create economic opportunities and growth for the entire region by doing three things: commemorating the past, which we feel is very important because it’s a long 300 years of history that stretches from the Natchez Indian tribe through the French, the Spanish and British rule until we became a part of the U.S; celebrating the present, which is celebrating all the things that we are today that have been created over the years; and then looking at creating a better future.”

Heritage tourism is a major part of the Natchez economy and attracts hundreds of thousands of visitors from across the region, the country and around the globe. Combs says the city plans to use the tricentennial year to redefine heritage tourism by exploring even more of its rich history and incorporating that history into current and new attractions. For example, the Historic Natchez Tableaux, a multimedia experience that recounts the birth and progress of Natchez through music, storytelling and dance, and part of the annual Spring Pilgrimage of Antebellum Homes tour, was rewritten in honor of the tricentennial.

“This was the first time we updated the Tableaux to include slavery, and we plan on adding to our story every year,â€ says Regina Charboneau, chef at Twin Oaks Bed & Breakfast – a stop on the pilgrimage tour.

Combs says the tricentennial is an opportunity to embrace and celebrate the contributions made by all of the city’s settlers.

“We have a very strong African and African-American heritage,â€ Combs says, “But we also have a rich Jewish heritage. The Jewish community came into Natchez and really created the whole merchant [side of] downtown. We also have a very strong Italian heritage and Scottish and Irish history, as well as a strong Asian and Hispanic community. What we’re looking to do with this tricentennial is to make that rich history more meaningful and relevant to today’s tourist, but also to our local community, to the people who have worked really hard over many years to keep Natchez going.”

While 20 percent of Adams County residents work in a tourism-related industry, Combs says the tricentennial creates tremendous opportunities to engage the entire community in building this important part of the city’s economy. One such opportunity is the Americana Music Triangle – a series of driving trails stretching from Nashville to New Orleans and back up to Memphis with stops along the way exploring the nine different genres of music that originated in the region. Combs says the city is also collaborating with the National Park Service to add to its collection of historic homes.

“[The Natchez National Historical Park] is home to the Melrose, the William Johnson House, the Fort Rosalie site, and now the Forks of the Road, which is a major site for the second-largest slave market during the Civil War,â€ Combs says.

The city is also partnering with the park service to enact the Natchez History Minute – a series of recorded moments in history, recorded by various members of the community over the course of 366 days.

Combs says the tricentennial also offers opportunities to plan legacy projects that will strengthen the community and its economy beyond the yearlong celebration. For example, the city is working with the Mississippi River Association to develop a sustainability plan to protect the waterways. The city of Natchez has been actively implementing revitalization projects along the historic Dr. Martin Luther King Jr. Blvd., including building more affordable housing.

The tricentennial celebration has also gained the attention of outside investors, such as Viking Cruise Lines, which is building new boats to add to the fleet of riverboats currently docked along the Mississippi River. More recently, the Clinton Foundation in partnership with Humana invited Natchez and Adams County to be part of a five-year initiative to improve the physical health and well-being of the community by addressing everything from fitness to nutrition to access to health care and recreational opportunities.

“The whole focus and fundamental goal is to create a positive path for the future by bringing the community together using our 300th anniversary as a catalyst for positive change going forward,â€ Combs says.

The whole focus and fundamental goal is to create a positive path for the future by bringing the community together using our 300th anniversary as a catalyst for positive change going forward.