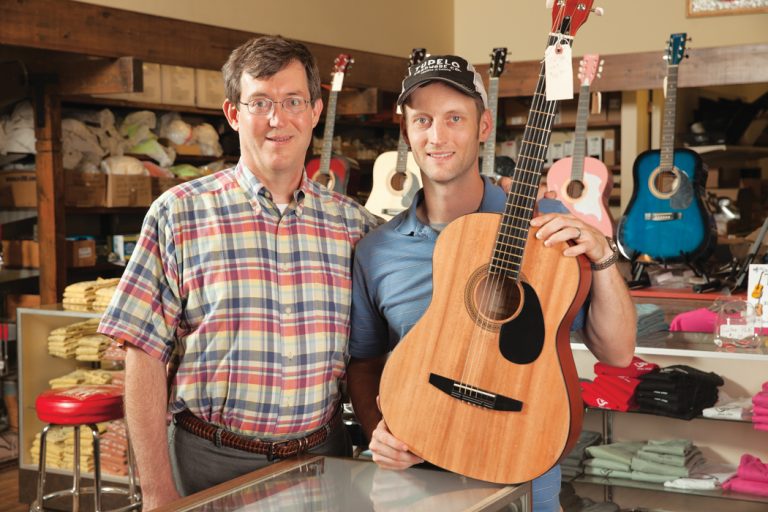 Driving west on Tupelo’s Main Street, you can’t help but notice the Tupelo Hardware Company sign against the downtown Tupelo landscape. What lies beneath that sign is nearly 100 years of history that helped build a community and enabled a young boy to begin his pathway to international stardom.

Tupelo Hardware Company was founded by George H. Booth in 1926. His son, William, returned from service in World War II to work in the family’s store. As Tupelo moved from an agrarian society to industrial, Tupelo Hardware Company shifted its focus, providing industrial supplies needed by the growing manufacturing sector. In 2000, George H. Booth, II, took over operations for the store, continuing to specialize in mill and industrial supply, small engine parts, and general hardware stock. George H. Booth, III, returned to Tupelo in 2014, bringing a vision for the future of the store, along with an excitement and passion for his hometown. He is the fourth generation of the Booth family to operate the store that promises “if you can’t find what you need at Tupelo Hardware, then you don’t need it!”

“As for the future of the business, we want to keep doing what works,” Booth, III, says. “In my mind, the modern version of our business has been focused on three sectors: industrial supply, small engine/mower parts and general retail. In the future, we want to continue to provide great service to our industrial customers and our small-engines customers, but we want to develop a renewed focus on general retail sales as downtown becomes a more popular place to live and shop.”

One now infamous day in 1945, a young Elvis Presley accompanied his mother to Tupelo Hardware Company to purchase a bicycle for his 11th birthday. Once inside the store, Elvis spotted a 22-caliber rifle and pleaded to take it home instead. Gladys refused and young Elvis pouted, but a family friend, Forest L. Bobo, an employee of the store, pulled out a guitar from behind the glass case and handed it to Elvis. His mother agreed to purchase the $7.75 instrument, and music history was made.

Today, visitors from around the globe flock to Tupelo Hardware Company to stand where Elvis stood and experience this incredible piece of small-town Americana. Guitars comparable to what Elvis purchased are still available today. It isn’t unusual to spot celebrities strumming a Tupelo Hardware guitar, prior to their performances at Tupelo’s BancorpSouth Arena. Currently, a trail is under construction from the Elvis Presley birthplace to downtown Tupelo, connecting two of the city’s most iconic attractions.

“Tupelo Hardware is an integral part of the Elvis story, making it a destination for visitation in our community,” says Neal McCoy, Tupelo CVB executive director. “It is an authentic experience like no other, and this is what keeps Elvis fans coming from around the world.”

Tupelo Hardware Company will forever be known as the store that gave the gift of music to one of the greatest entertainers the world has ever known. It has also helped equip a community to grow, and has no plans of slowing down.