Skip to content
Home > MT > Great Falls > Love Where You Live > Back to the Future: How Great Falls, MT is Uncovering the Past

Back to the Future: How Great Falls, MT is Uncovering the Past 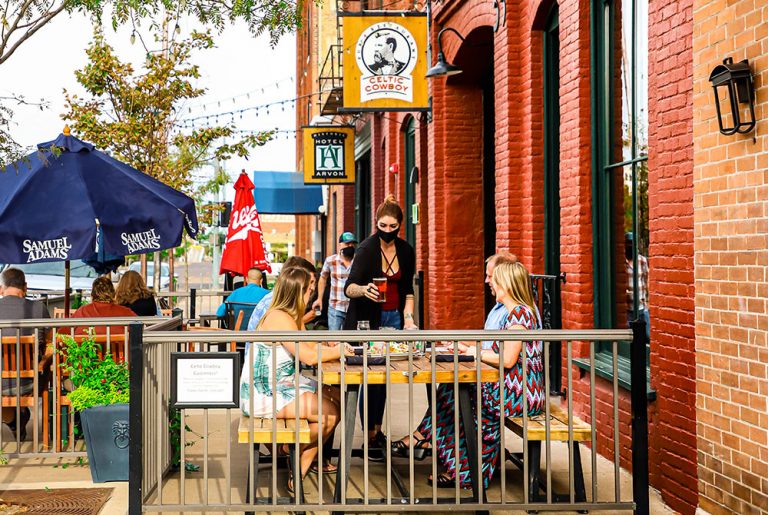 Great Falls has evolved and modernized over time, but traces of its history can still be seen throughout the region.

Arvon Block, for example, has quite a past. This building, which is a point of pride for those who grew up in the area, was one of the first structures in Great Falls. It was named after Welsh immigrant Robert Vaughn (1836-1918), the first European settler in the county.

Arvon Block – a take on his name (R. Vaughn) – featured a livery stable, freight transfer office, teamster boarding house and greengrocer. Vaughn soon became known as “The Celtic Cowboyâ€ by the press, and now, more than 125 years later, the building houses the Celtic Cowboy Pub and Restaurant and the Hotel Arvon.

“In 2011, I heard a rumor about the Arvon Block building possibly being torn down due to disrepair, and I’ve always been interested in historic preservation,â€ says Peter Jennings, owner of the Celtic Cowboy Pub and Restaurant and the Hotel Arvon. “I started a movement to save the building.”

Grow Your Business in Great Falls

Today, the three-story Hotel Arvon features 33 comfortable rooms, including some extended-stay lofts with kitchenettes, and on the first floor, the Celtic Cowboy Pub and Restaurant serves Irish food alongside American classics.

Think fish and chips, corned beef, shepherd’s pie, bangers and Guinness stew. The pub/restaurant has garnered several accolades, including being named the North American Pub with the Best Sports Experience from the Irish Pubs Global Organization.

“Even though the building is on the National Register of Historic Places, the food and hotel accommodations are modern and appealing,â€ Jennings says. “We were a popular destination for locals and visitors prior to COVID-19 hitting, and now, our business is slowly picking up again at both the pub and hotel.”

Another building with an interesting history houses KellerGeist, a pub that claims the most German beers per square foot in the world. The structure, considered one of the city’s oldest buildings, was constructed in the 1880s by William Albrecht. First built as a furniture warehouse, it was later turned into an adult entertainment theater and then a community theater. The name “KellerGeistâ€ is a play on words. The translation is “ghost in the basement,â€ as keller can mean cellar, and geist can mean spirits. And there are rumors that there is a ghost in the pub’s basement.

Speaking of things that are well-seasoned, Great Falls is regarded as the Museum Capital of Montana, with a collection of showcases that includes the Paris Gibson Square Museum of Art, the Ursuline Centre and the Lewis & Clark Interpretive Center, which brings to light the story of Lewis and Clark discovering Great Falls. And inside The History Museum, you can find more than 300,000 artifacts in its permanent collection, along with other exhibits.

“We welcome an influx of out-of-state visitors who are curious about the natural beauty of Montana, along with our unique Western American heritage,â€ says Kristi Scott, executive director of the Cascade County Historical Society/The History Museum. “I’ve always been interested in history and actually moved to Great Falls because of the rich museum heritage.”

Scott says The History Museum has more than 50,000 photographs from the 1860s to the present, and one of the main attractions is a Wabi-Sabi-art-meets-history exhibit. Wabi-Sabi is a Japanese philosophy of accepting broken, worn and discarded things and making the most of them.

“We also have an interesting Ozark Club exhibit that highlights a group of African American musicians from the 1930s, ’40s and ’50s who performed an exhilarating form of music that broke down barriers by entertaining people of all races,â€ Scott says. “That’s just one of the many displays at The History Museum. I invite everyone to stop by and spend a couple of entertaining and educational hours here.

If you’d like to learn more about the Great Falls area, check out the latest edition of Livability Great Falls, MT.