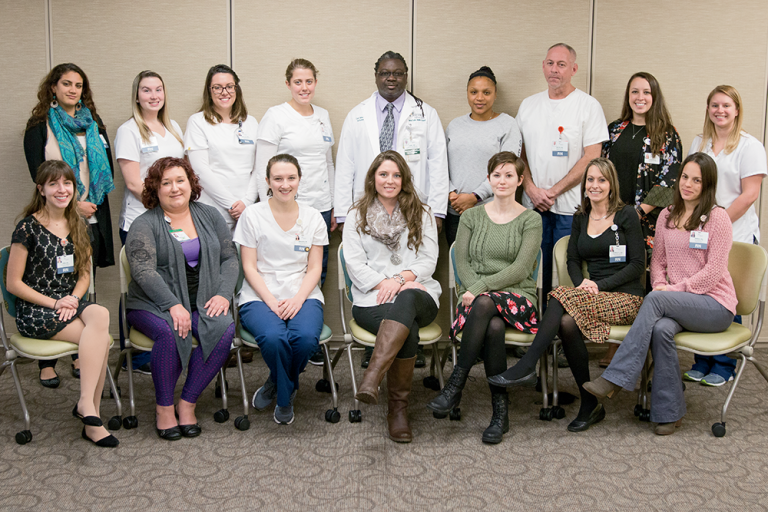 There’s no shortage of nursing success stories at Mission Health. One team member, Melina Arrowood, actually began her career 10 years ago as a CNA and recently filled in as interim president of Transylvania Regional Hospital.

After graduation, she worked at positions such as ED staff nurse and patient safety officer, and was eventually asked if she’d ever consider a leadership position.

“I first accepted the team leader position in the ED and then had the opportunity to serve through multiple other leadership roles, such as Patient Safety Officer, Supervisor, and then Manager of the ED Clinical Decision Observation Unit for Behavioral Health,” she says. “I took every opportunity to learn and grow.”

“I’m also working on master’s degrees in nursing and business,” Arrowood says. “Mission has opened many doors for me and continues to encourage me to move my career forward.”

Home Is Where the Heart Is

Magaly “Maggie” Roth had a different path to success, hired as a unit secretary at Transylvania Regional Hospital in the late 1980s.

Roth always wanted to be in the medical field, and she would even help nurses whenever she could get a few minutes away from her secretarial duties. She eventually decided to attend nursing school.

“I got my associate’s degree and it wasn’t long before I became a charge nurse, and I eventually returned to school for my bachelor’s degree,” Roth says. “While studying, I became manager of the hospital’s Med-Surg unit, and later the ICU.”

“Then I thought it was time for a change, and I went into home care,” she says. “At first, it was a little daunting going into a stranger’s home and looking at all their medicines and asking a lot of private questions, but after awhile you realize that’s how you help people. You develop a relationship with every patient.”

“Being a home care nurse offers much freedom. I make my own daily schedule and see patients in the most economical way,” Roth says. “We need nurses in this field because the future of nursing will largely be in home care. I have a real passion for this work and hope to do this another
five to 10 years.”

Much Easier for New Nurses

Meanwhile, for nurses just starting their careers, Mission helps make the transition from school to clinical practice a bit easier.

“In the past, new nurses graduated school and were grouped with experienced nurses in orientations or any classroom training sessions, and that often made it stressful for new grads,” Witherspoon says. “In training classes, experienced nurses often spoke up to answer questions and share their knowledge, and this would be intimidating to new nurses. The new nurses often gravitated toward the back of the class and didn’t really participate.”

That has changed at Mission Health. Today, new nurses are grouped only with one another in training classes during three to four months of orientation.

After the learning orientation period is completed, new nurses attend a monthly professional development class with each other to discuss different topics as a big group.

“Our entire RN residency program lasts 12 months, whereas most hospitals have only six-month or nine-month programs,” Witherspoon says. “Our new nurses are trained very well, and they are assisted every step along the way to ensure their success.”