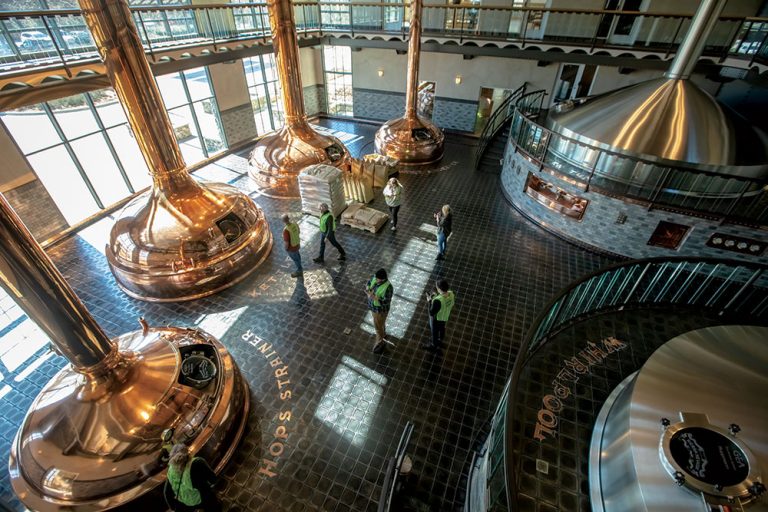 When you name your brewery after some of America’s most spectacular mountains, your natural conservation game better be strong. And though sustainability and craft beer have long been inseparable cousins, Sierra Nevada does it on a scale never seen before at its Mills River brewery.

Founder Ken Grossman has long held Sierra Nevada to be a pioneer in eco-friendly brewing. The company’s original facility in Chico, CA, has led that charge for decades. It grows its own organic barley and hops at an on-site farm to reduce transportation impact. It has over 10,000 solar panels producing over 1.5 megawatts of electricity. It even raises its own cattle – fed with spent grain from the brewery – for use in the taproom’s restaurant. But when Sierra Nevada opened up shop just outside of Asheville, it set a new industry standard for sustainability.

The Mills River brewery was the first LEED Platinum Certified production brewery, for starters. But the brewery goes far past impressive acronyms to help minimize its impact on the environment.

Much like the beer-making process, sustainability efforts begin with water. Knowing a brewery that puts out 6,000 barrels a week could easily overwhelm a city’s water treatment capabilities, Sierra Nevada has its own treatment plant on-site. That plant uses beneficial bacteria to not only treat the water, but to produce biogas that feeds two jet engine turbines that hum along behind the brewery powering boilers and microturbines.

The brewery also collects rainwater through permeable paving, where rainwater seeps through the pavement and into a dozen 6,500 gallon cisterns. Sierra Nevada then uses the water for everything from flushing toilets to irrigating plants. Through all of these efforts the brewery has achieved a 4:1 ratio of barrels of water used to beer produced – nearly unfathomable in an industry where 35:1 ratios aren’t unusual.

Beyond its innovative use of water, Sierra Nevada also has a commitment to waste reduction, diverting 99.8 percent of its waste from landfills. In addition to the aforementioned wastewater treatment, it sells its spent grain to local farmers, recycles all of its bottles, and captures steam let off during the brewing process, reusing it to power air compressors and heat future batches. It also composts much of its organic waste via a local contractor.

Supply and distribution chains are also major sources of waste reduction. Bread and other baked goods for the restaurant and taproom are made in-house, reducing the fuel and packaging used in outsourcing. Many vegetables on the taproom’s menu come from a garden on the sprawling patio. And Sierra Nevada even built a six-mile rail spur to the brewery so it can ship its beer more efficiently; every rail car carries the equivalent of four semi-trucks worth of beer.

Where most large-scale developments at best do minimal harm to the land on which they sit, Sierra Nevada has actually improved its 185 acres. It removed invasive plants as part of construction, planting native species in their place that are now thriving. It’s also placed bird boxes along the French Broad River so the endangered birds have a safe place to feed, and planted shrubs that encourage pollinators to land and improve the overall vegetation of the area.

So while one might not notice all Sierra Nevada does to help save the planet while sipping Bigfoot in its wood-lined taproom (wood, you might note, taken from the trees cut down to build the brewery) you can take comfort in the fact that the $5 you just plunked down is going to a business that’s also a good neighbor. And like the towering mountains it’s named after, its stands as a beacon to all that is great about preserving our natural resources.