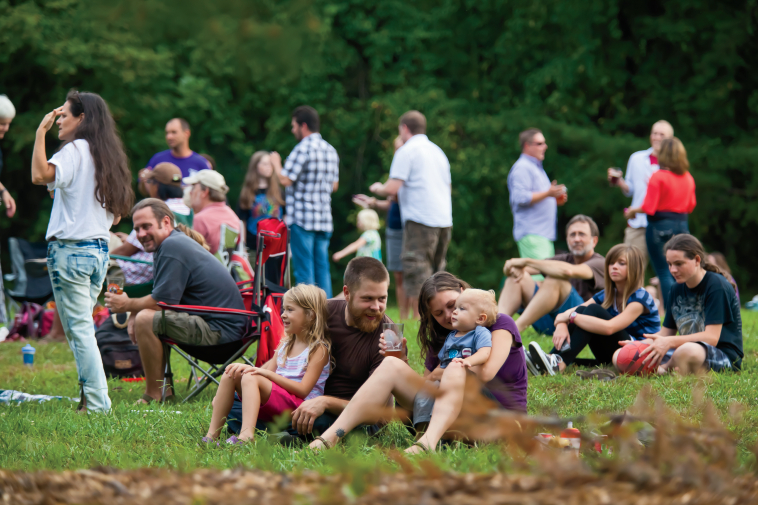 Maybe it’s the picturesque surroundings, the clean mountain air, or the love of all things eclectic that inspire so many visual and performing artists to settle in Asheville. Whatever the reason, the city’s residents and visitors reap the benefits of an arts, music and cultural scene that rivals that of most major metropolises.

Asheville finds a number of opportunities to celebrate the arts throughout the year. Art and craft collectors can also hunt for high-quality treasures at the annual Village Art & Craft Fair, which attracts artists and shoppers from across the southeast. The Craft Fair of the Southern Highlands brings nearly 200 craftspeople to the Folk Art Center each July and October. Shoppers will find high quality works of clay, fiber, glass, leather, metal, paper, wood and jewelry. Asheville Beer Week, typically held in late May, draws thousands of beer lovers to the city each year. This celebration of breweries in Asheville includes music, classes and, of course, tastings.

Asheville shows off its musical side during a series of festivals and events, including the Montford Music & Arts Festival, billed as the largest one-day music and arts festival in western North Carolina. During the summer months, Asheville gathers downtown on Friday nights for Downtown After 5, a free concert series, and then in downtown’s Pack Square every Saturday night for Shindig on the Green, a serenade of local bands and musical performances. Held below Mt. Mitchell, on 600 acres, the Lake Eden Arts Festivals (LEAF) are designed to connect cultures & create community through music and art. Held twice a year, in May and October, LEAF festivals bring artists, musicians and performers from across the globe to reflect the creativity of the Asheville area.

Asheville is a tourist’s treasure trove of must-see attractions. Shop till you drop and chow down at the historic Grove Arcade, while exploring its unique architecture and history. Get lost in thousands of acres of Asheville’s beauty at the popular Biltmore. Listen to live music at New Mountain Asheville.

Wander through the Biltmore’s gardens, sample some fine wine and take in a concert, all while surrounded by Asheville’s majestic mountains. Pack a picnic and head to Pack Square Park to enjoy the exciting downtown scenery. Then hop on a Segway for a fun tour of the city with the Moving Sidewalk Tour company.

Tap into your own creativity through creative classes and workshops. Asheville Community Theatre offers drama classes for youth and adults. Try your hand at mixed media, printmaking or photography with the Asheville Art Museum. And explore functional and sculptural pottery at Odyssey Ceramic Arts.

Asheville’s natural beauty makes the city and surrounding region a sought-after location for Hollywood films. The first of the blockbuster Hunger Games trilogy was filmed entirely in North Carolina with several of the movie’s pivotal scenes shot in nearby DuPont State Forest.

Asheville’s Arts Scene Has Deep Roots and a Bright Future

Other movies featuring scenes from around the region include Last of the Mohicans shot in Chimney Rock Park; Dirty Dancing, shot at Lake Lure; Anthony Hopkins’ Hannibal, which features the historic Biltmore; and Nell, starring Jodie Foster and shot at Fontana Lake.

Most recently, Zach Galifianakis filmed his upcoming feature Masterminds in Asheville. The comedy stars The Hangover actor as an armored car driver along with Owen Wilson and Kristen Wiig.