Asheville’s Arts Scene Has Deep Roots and a Bright Future

Asheville is a hub for traditional crafts and emerging arts. 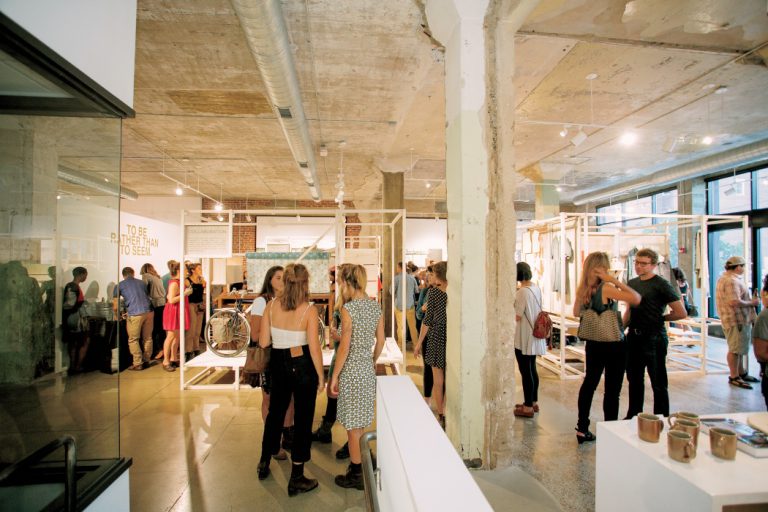 Asheville / Photo courtesy of the Asheville Area Chamber of Commerce

Folks in the Asheville community have long been drawn to its scenic beauty and to the crafts and artwork created here.

Throughout history, crafts skills were a necessity for maintaining a home and farm. Now modern craft artistry is embracing these skills and bringing new techniques into the 21st century. The Southern Highland Craft Guild, which was established in 1930 to cultivate commerce for craftspeople during the Depression, is keeping yesteryear’s skills alive with demonstrations and exhibits, while offering peer mentorship and education for today’s artists. The Guild, located in Asheville, serves about 900 members stretching across the nine-state Appalachian region and is one of the strongest craft organizations in the country. Membership is awarded through a rigorous process.

“The number of craft artisans has increased exponentially since the Depression,” says Donna Kull, director of marketing and development for the Southern Highland Craft Guild, which is a leader in the craft revival movement. “These makers are now widely diverse in culture and ethnicity. Craft artistry today may be either a livelihood/economic necessity or a special hobby/income enhancement.”

“The longtime residents have a deep appreciation for Asheville and western North Carolina’s deep roots in the Appalachian arts culture –even going back to remembering great-grandparents who immigrated here from Ireland and Scotland, bringing with them the rich traditions that influenced our mountain arts culture of today,” she says.

The Guild maintains the Folk Art Center, where it offers daily craft demonstrations of old-fashioned items such as handmade brooms and the “Whimmy-Diddle,” a traditional Appalachian Mountain toy made from two sticks and a propeller. The organization hosts Heritage Weekend each autumn and also organizes two popular craft fairs every year that feature more than 200 juried craftspeople and live demonstrations, which attract about 20,000 people to the U.S. Cellular Center in downtown Asheville. Visitors travel from around the globe to attend these events and to the Guild’s three local shops and another at Moses Cone Memorial Park on the Blue Ridge Parkway near Blowing Rock.

The local appreciation for art and the many galleries, jewelry stores and designer shops throughout the city are attracting new artists to Asheville. Cindi Becker-Lemkau moved here from California in 2011 after a nationwide search for the best cities and towns for artists. She was juried into the Southern Highland Craft Guild in 2015 and now creates artworks from found objects, discarded fabrics and hand-sewing.

“It is my desire to have my work represent the traditions that are embedded in the legacy of these mountains,” says Becker-Lemkau, whose pieces are sold under the Pinner’s Mill label. “It is the art, in all its forms, that could be identified as the core of Asheville’s soul.”

The Study of Art

With Asheville firmly placed on the map as an arts hub, the city has been a successful location for the Center for Craft, Creativity & Design. The CCCD, which started on the University of North Carolina campus in Hendersonville and is now on Broadway Street in Asheville, serves students, faculty and researchers, museum curators, artists and the public. Among its roles, the nonprofit organization supports research in the area of craft and design, and invites Asheville residents to visit its Benchspace Gallery & Workshop for rotating exhibits, lectures, panel discussions and gallery talks.

“We feel our role is not to define what craft is, but to provide resources and support for those exploring what craft can be,” says Lauren Pelletier, marketing and development coordinator for the CCCD.

The CCCD is planning new exhibits, activities and grants for the new year.

“We are glad to play a role in educating, not only about the past history of craft, but its future, too,” Pelletier says.

In 2017, the Southern Highland Craft Guild celebrates its 70th year of craft shows with expanded live demonstrations and other activities that honor the crafts world’s history and future.

“That sums up our vision here: to honor our rich craft cultural heritage of the past while looking ahead to the future, which is also very bright with such a vast array of fresh new creative talent and energy,” Kull says.