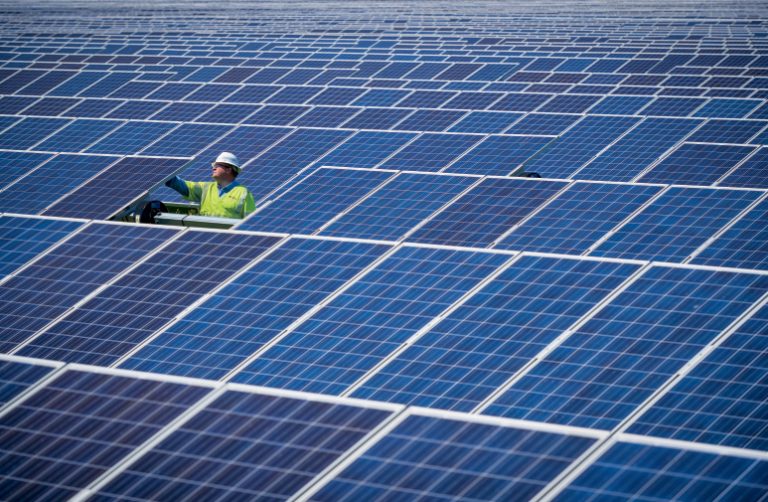 Elizabeth City is experiencing a power surge, due to two significant alternative energy developments in the region.

First, Amazon Wind Farm US East is now in operation amid more than 22,000 acres of farmland straddling Pasquotank County and Perquimans County. The wind farm is the first of its kind in the southeastern United States, its 104 white windmill towers each standing more than 300 feet tall with blades that can rotate up to 200 mph.

Also in the community is a 20-megawatt solar farm operated by Duke Energy Renewables that features nearly 100,000 solar panels stretching over a half-mile of farmland along U.S. 17 south of Elizabeth City. Duke Energy is currently building solar panels on two other sites, while Chicago-based Invenergy plans to construct a solar farm in the Morgans Corner area just north of Elizabeth City.

“Both of these projects are a boost to the local economy. For example, wind project contractor Avangrid Renewables spent nearly $18.5 million locally just during the construction phase for the 104 wind turbines,” says Wayne Harris, economic developer with the Elizabeth City | Pasquotank County Economic Development Commission. “Now that the project is up and running, there are 17 full-time employees making about $80,000 a year who will provide upkeep on the towers, turbines and blades.”

The leasing of land for the wind farm involves Avangrid paying about 60 local farmers $6,000 per turbine per year. Meanwhile, Avangrid contracts with Amazon Web Services for Amazon to use all the energy, with all electricity delivered to a grid that supplies multiple Amazon data centers as well as future ones.

“Besides an annual lease payment totaling $624,000 to the farmers from Avangrid, both Pasquotank and Perquimans counties also receive $5,000 per turbine, which means the counties receive $520,000 annually,” Harris says. “Those are big numbers, making Avangrid Renewables the largest taxpayer in both counties.”

The 18-month wind farm construction project was a huge effort completed in early 2017, and it featured about 500 workers from more than 30 North Carolina-based companies.

“Another advantage for the local farmers is that Avangrid built roads on their property in order to haul the massively heavy turbines to each site, and these roadways today give farmers easier access to their crops and cattle,” Harris says. “The towers take up about 5 percent of their land, giving the farmers 95 percent for crops.”

He adds that Elizabeth City is an ideal location for such a wind farm project.

“Along the Atlantic Ocean, the topography of Elizabeth City features heavy trees, but two miles inland, the area has been called the Little Midwest because the land is as flat as a pancake and ideal for wind,” he says. “Having a big-name brand like Amazon is great for marketing this impossible-to-miss project, with Amazon under contract for at least the next 30 years.”

Meanwhile, the 20-megawatt solar farm operated by Duke Energy Renewables is producing electricity and sending it to Washington, D.C., specifically to American University, George Washington University and GWU’s hospital. Harris says local farmers are also paid annually to lease their property to Duke Energy, but there is one disadvantage to the farmers.

“With the wind turbines, those farmers can still use 95 percent of their other land to plant crops, but for farmers who rent their property for a solar farm, they can’t plant any crops on adjoining acreage,” he says. “As a result, higher lease prices are being paid to farmers for solar because they can’t use their land for anything else.”

Harris points out that an amazing statistic is that because there was so much farmland available for both projects, not a single residence was affected.

“There is more and more interest in both energy farms these days, with the sites becoming somewhat of a tourist attraction,” he says. “I’ve received dozens of requests from groups wanting tours, but nothing can be set up yet. I can certainly understand why people want to see them.”

Even aviation-related businesses need to put down roots — and if you’re looking for quick, easy access to an airport runway system in North Carolina, there’s no better place to… END_OF_DOCUMENT_TOKEN_TO_BE_REPLACED