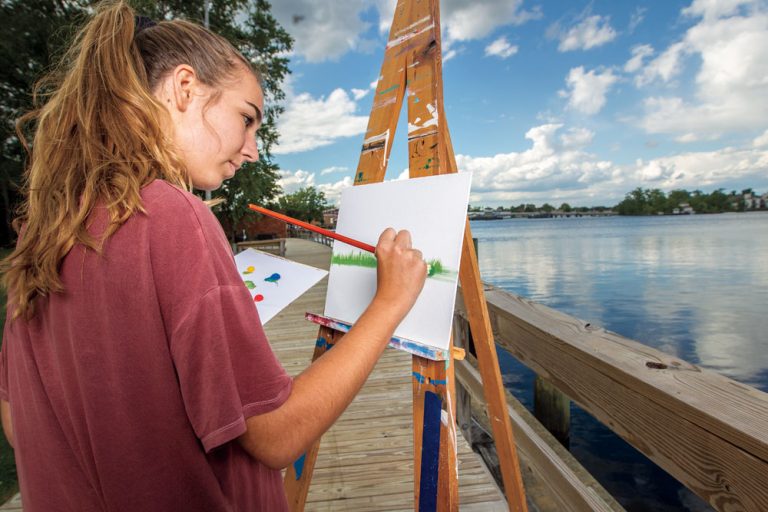 A road trip to Elizabeth City? Great idea, and it’ll soon be easier getting here thanks to a bridge project.

The Mid-Currituck Bridge will be a significant addition to the infrastructure of Elizabeth City, and the bridge will be especially important to some of the 8 million tourists who vacation 45 minutes away in the Outer Banks. Many of those vacationers visit the northern part of the Outer Banks in towns like Duck and Corolla, but today there is only one bridge at Kill Devil Hills that crosses over to the Outer Banks.

“If you’re going to the northern Outer Banks from Elizabeth City, you must drive an hour south to the Kill Devil Hills bridge to cross it and then head north again to get to the small towns, so that’s a 1 1/2-hour drive at the very least and much longer during peak season,” says Wayne Harris, director of the Elizabeth City Pasquotank County Economic Development Commission. “The Mid-Currituck Bridge, which is scheduled for completion in 2021, will cut the drive time in half.”

Harris adds that for people driving from the northern part of the Outer Banks, Elizabeth City would be the first destination of interest once they cross the new bridge.

“Our downtown waterfront will become a major destination, and I’m already seeing a fair amount of capital starting to flow into downtown Elizabeth City in anticipation of that bridge opening three years from now,” he says.

In other infrastructure news, Harris points out that Elizabeth City is basically part of the Commonwealth of Virginia’s Hampton Roads, Norfolk, Chesapeake and Virginia Beach metropolitan area, and while it is geographically located only 50 miles from Norfolk International Airport and 45 minutes from the Port of Virginia, getting there hasn’t always been painless.

“For years, Elizabeth City motorists have endured a six-mile, two-lane bottleneck on Dominion Boulevard in Chesapeake heading to those Virginia destinations,” he says. “Besides bottlenecks, the road had an old-fashioned drawbridge that needed to open whenever ships wanted to pass through along the Elizabeth River below. So anytime during the day, motorists could be caught in complete gridlock.”

However, those traffic headache issues are now resolved with the completion of a $345 million fixed-bridge reconstruction project along Dominion Boulevard.

“The roadway has expanded from two to four lanes and is high enough above the Elizabeth River to allow shipping to pass underneath with no need for a drawbridge anymore,” Harris says. “It also doubles as an overpass over Cedar Road, which also suffered major backups prior to the reconstruction.”

More infrastructure good news — for the future — is that U.S. Highway 17 has been designated as the future Interstate 87, and that announcement is opening the door to interest from distributors and manufacturers who wouldn’t have considered locating to Elizabeth City before.

“A future Mid-Currituck Bridge, improvements to the Dominion Boulevard bridge and the future I-87 are making Elizabeth City and Pasquotank County attractive for more companies to do business here,” Harris says. “We’re going to start seeing a lot more smart growth.”

Harris adds that another key construction project is a renovation to an iconic building in downtown Elizabeth City that hasn’t given the best first impression for motorists arriving here.

“The first building you see when coming off the Camden Causeway is the old Weatherly Candy Factory Building on the corner of Water and Elizabeth streets, and right now that building gives a very negative and misleading first impression,” he says. “It’s a dilapidated building that is vacant, but J.D. Lewis Construction Management has purchased that building and two adjacent buildings to convert them into nice-looking loft apartment complexes.”

The reconstruction effort began in mid-2018 and is scheduled for completion in 2019.

“That’ll be in time for the 2019 tourist season,” Harris says. “Visitors will then come from Camden Causeway and the first thing they’ll see is a completely restored, market-rate apartment complex that will be very attractive to look at.”