See Why Elizabeth City, NC, Is the ‘Harbor of Hospitality’

From a vibrant and evolving downtown to a picturesque waterfront, Elizabeth City exudes Southern charm. 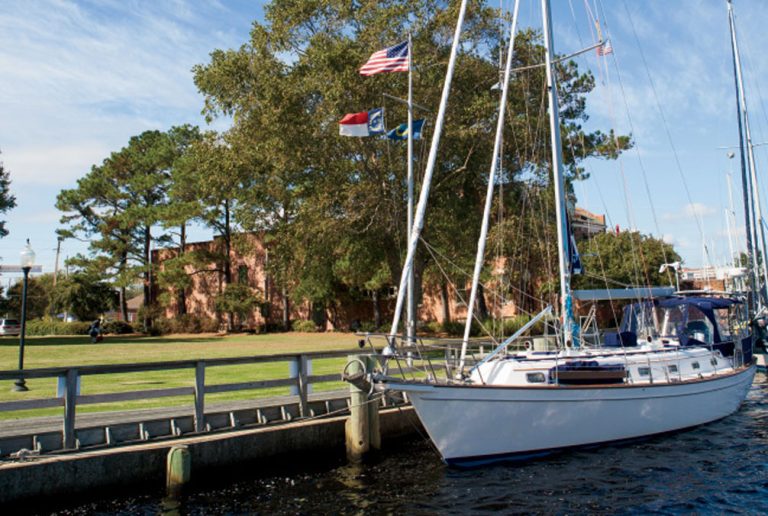 They say location is everything, and that couldn’t be truer for this northeast North Carolina town. Elizabeth City’s geography, natural resources, recreational opportunities and entertainment attractions make it a desirable destination for people of all stripes.

It’s no coincidence the city has earned the unofficial moniker “Harbor of Hospitality.â€ Elizabeth City Downtown Inc.‘s Executive Director Deborah Malenfant calls it a “traditional Southern townâ€ with friendly and welcoming people, characteristics long-rooted in the community’s role in the shipping industry. Its strategic location at a narrowed bend of the Pasquotank River means it has seen a large amount of traffic since its founding in 1794. First forming as a mercantile city, it later shifted into a varied industrial and commercial focus. Today, Elizabeth City boasts the largest U.S. Coast Guard base in the nation, and residents are still invested in the waterfront, particularly for special events and recreational uses.

Elizabeth City Reveals Its Artistic Side

Speaking of investment, Malenfant says the focus for some time has been on revitalizing and growing downtown, which is adjacent to the waterfront. She cites Ghost Harbor Brewing Company, a recent addition, as one success story. This small-batch brewery, which opened in December 2017, serves about eight beers at any given time. Malenfant says the company is a great example of collaboration in action, supplying local restaurants and also partnering with restaurants for tableside food orders. And the atmosphere is second to none. Located in a former horse stable with exposed brick walls, the vibe makes the experience. You might even go so far as to call this destination a hidden gem.

“They are located out of the way and only accessible via an alleyway. You kind of have to look for it,â€ Malenfant says.

And people are finding the brewery, much to owner and brewer Thomas Reese’s delight. He says the community has been supportive, from the first tasting to a recent St. Patrick’s Day party. Looking forward, he says he would like to expand his tasting room hours and get his brews in more local restaurants.

Malenfant says Ghost Harbor is in good company in its success. There is a growing “restaurant and business clusterâ€ downtown. In the last year or so, she says they’ve seen everything from Japanese to new Southern cuisine represented. She credits the total renovation of Pailin’s Alley in part for this momentum. This fenced-off space with a pedestrian pass-through area is a hub for outdoor dining and entertainment. In her words, “we’re taking space formerly underutilized and creating community space out of it.”

In short, downtown is a hot spot and that’s likely not going to change anytime soon.

“So, we’re seeing a lot of interest in downtown and a focus on historical restoration,â€ she says. “That’s because the local economy has improved, and there has been a concerted effort on the part of groups to beautify downtown. FaÃ§ade grants, which help business owners improve their exteriors, have been a key component of the renovations.”

And residents are looking to be where the action is, so Malenfant says they have plans for additional “market rateâ€ apartments.

All of these elements add to the area’s quality of life, which Malenfant says are physical representations of residents’ civic pride. Just a few other must-visit destinations downtown include Japanese restaurant Toyama; Quality Seafood Market, for fresh catches; Eclectic Jewelry for new, estate or handcrafted pieces; Hoppin Johnz, for new Southern cuisine; Cypress Creek Grill, for Tex Mex, Creole and seafood favorites; and the Lazzy Frog for boutique clothing.

Those looking for cultural experiences should check out Arts of the Albemarle, also downtown. This world-class facility houses the Jaquelin Jenkins Gallery, a home to over 250 artists, craftsmen and photographers; the AoA School of the Arts, a multidiscipline visual and performing arts after-school instructional program; and the Maguire Theatre, a state-of-the-art 230-seat performance space. The nearby Museum of the Albemarle invites visitors to explore and understand the past, to reflect on their own lives and their place in history, and to preserve regional history for future generations.

These experiences define life in the area, as do water-centric activities. Malenfant says it’s no coincidence that nine of the 11 city parks are on the waterfront. Residents and visitors alike can take advantage of canoeing, kayaking and paddleboat activities. According to Malenfant, the Pasquotank River Yacht Club is the local authority on water-centric recreation, as it offers boating and sailing classes.

Even aviation-related businesses need to put down roots — and if you’re looking for quick, easy access to an airport runway system in North Carolina, there’s no better place to… END_OF_DOCUMENT_TOKEN_TO_BE_REPLACED