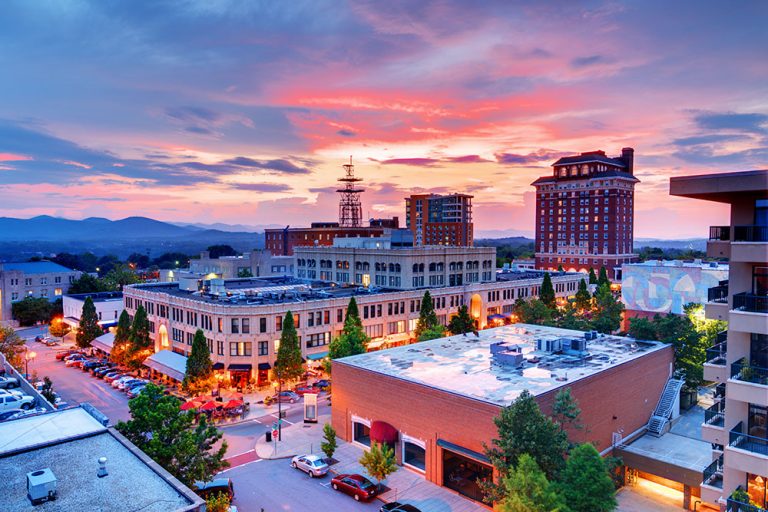 Beaches and mountains attract most tourists to North Carolina, and while the rugged and lovely outdoors are good reasons to visit, there are many more things to do in the Tar Heel State. North Carolina adventures range from water sports like paddleboard and white-water rafting to biking mountain trails and strolling historic downtowns. Take a look at our picks for the best things to do in North Carolina. Consider this list a guide for those planning a trip to North Carolina or preparing to move to this coastal state. One thing’s for sure, you won’t run out of fun adventures and great entertainment.

You can go home again – to author Thomas Wolfe’s home, during a visit to the Thomas Wolfe House & Museum on N. Market Street in downtown Asheville. The famed writer, who penned novels like Look Homeward, Angel and You Can’t Go Home Again, lived from 1900-1938 and occupied the house during his boyhood.

Get some fresh air during a visit to Great Smoky Mountains National Park, which attracts more than 9 million tourists a year – twice the amount of the Grand Canyon. One entrance to the Smokies is near Cherokee and features an Oconaluftee Visitor Center. Vacationers can stay in surrounding towns like Cherokee, Sylva and Bryson City.

Adjacent to Interstate 77 on the North Carolina-South Carolina state border is Carowinds, a huge amusement park with 65 rides and an eight-ride Boomerang Bay water park. Carowinds has attractions like the Intimidator and Nighthawk roller coasters, while Boomerang Bay features a wave pool and lazy river.

Thinking about relocating? Here’s all the info you need to make your decision — and where to find it.

Sightsee and shop at dozens of factory outlets, custom showrooms, and private galleries in the cities of Hickory and High Point, considered two of the top furniture-producing hot spots in America. Stores include Furnitureland South, Hickory Furniture Mart and Replacements Ltd., and the nation’s furniture industry descends upon High Point Market twice a year.

See why North Carolina’s state slogan is “First in Flight” with a visit to Wright Brothers National Memorial in Kill Devil Hills. The site commemorates the first successful, sustained, powered flights that were piloted by Orville and Wilbur Wright in 1903. A full-size replica of their 1903 flyer is one of the highlights.

Batten the hatches and tour the USS North Carolina, a museum ship and memorial docked at the seaport of Wilmington. The battleship was the most decorated American vessel of World War II, involved in every major naval offensive in the Pacific Theater. The ship accumulated 15 battle stars and was recently renovated.

Moving to North Carolina? The toughest part is narrowing down your Tar Heel to-do list. Let us help.

Wear comfortable shoes while frequenting some of the 200 stores that make up Concord Mills, a 1.4-million-square-foot mall in Concord. The massive one-story plaza is North Carolina’s largest tourist attraction, welcoming 17 million annual visitors. There are four anchor stores along with AMC Theaters, and the city of Concord also has a Carolina Mall.

Cavort at the Cape

Fish, surf or enjoy other recreational opportunities at Cape Hatteras National Seashore, which stretches 70 miles from Bodie Island to Ocracoke Island. Managed by the National Park Service, the Seashore has four campgrounds along with hotels in surrounding cities like Buxton, Ocracoke and Rodanthe. A highlight attraction is Pea Island National Wildlife Refuge.

Take your children to Marbles Kids Museum in downtown Raleigh for a fun day of interactive play and education. The site is aimed at children under 10 years old who are creative thinkers and active learners, with attractions like Around Town, Splash!, IdeaWorks, Power2Play and an IMAX theater.