Learn about Eastern North Carolina’s important contribution to America’s national defense and the economic impact of military operations and aerospace and defense contractors in the 24-county region. 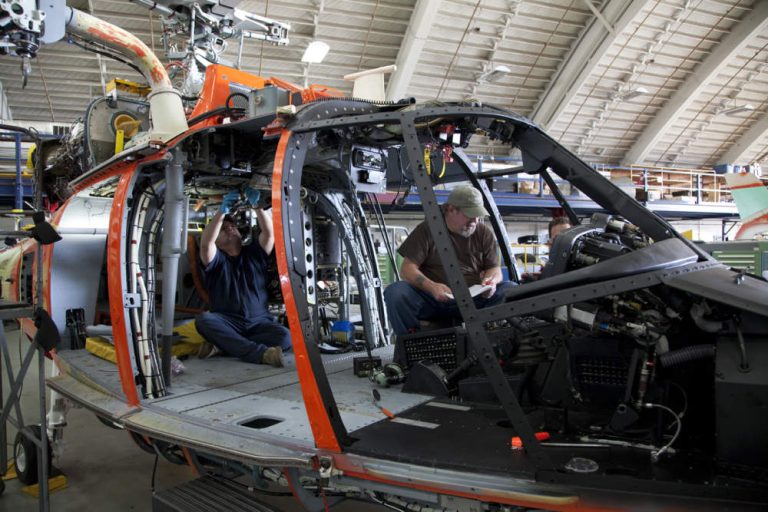 Eastern North Carolina’s contribution to the nation’s defense, and the economic impact of military operations and aerospace and defense contractors, will remain as powerful as ever for years to come, thanks to developments strengthening bases in the 28-county region.

When the Air Force’s new KC-46 Pegasus aerial refueling and strategic military transport aircraft begin entering service in 2019, they will be based at Seymour Johnson Air Force Base in Goldsboro. In addition, Fleet Readiness Center (FRC) East at Cherry Point will be the site of a new $14 million vertical lift fan repair facility for the F-35B, the military’s newest fighter aircraft. The bases are among the region’s top employers.

“Cherry Point is going to be the only vertical lift fan heavy repair facility in the world,” says Joe DellaVedova, public affairs officer for the F-35 Joint Program Office.

The KC-46 program will have huge economic impact over its projected lifetime. The aircraft, developed by Boeing from its 767 jetliner, will replace the KC-135. Those aircraft began entering service in 1957. “These tankers will be in service for a long, long time,” says Jimmie Edmundson, who heads the Military Affairs Committee, a division of the local chamber of commerce dedicated to strengthening Seymour Johnson.

In an era of base closings, the decision to base the KC-46 at the base was welcome news. “Our community has been working to protect Seymour Johnson. It’s easy to move the assets of an Air Force base,” Edmundson says. Another group, Friends of Seymour Johnson, has been active since around 2005, raising funds and visiting congressional delegations in support of military members at the base.

The base employs about 7,000 people, including active duty and reserve military personnel, civilians and private businesses, including an engine maintenance facility. The overall economic impact surpasses $594 million.

For FRC East, the vertical lift fan repair facility for the F-35B will preserve jobs. The F-35B will replace other aircraft used by the Marines, including the Harrier, which is also a short-takeoff, vertical landing aircraft. Fleet Readiness Center technicians who maintain lift fans for the Harrier will work on the F-35B. Fleet Readiness Center has a workforce of about 3,600 civilian military and contractor personnel. It is North Carolina’s largest industrial employer east of Interstate 95 and has an annual payroll exceeding $277 million. Roughly 700 engineers report to work at FRC East every day.

The Tech Industry in Eastern NC Is Booming

Elizabeth City has a storied history with aviation, dating to World War II when blimps stationed at a nearby Navy base helped detect German U-boats threatening to attack the East Coast. The U.S. Coast Guard base is a major economic driver.

“By the time you add full-time civilian employees and the base employees, you end up with about 12 percent of the employer base and 22 percent of the (county’s) payroll,” says Wayne Harris, Elizabeth City/Pasquotank County Economic Development Commission director.

The base performs heavy maintenance on aircraft used by the Coast Guard and includes acres of warehousing and hangars where parts are stored and manufactured. The base is also the site of a Coast Guard school for rescue swimmers, who train in a $28 million facility in which water rescues can be practiced.

“It can even simulate high winds,” Harris says

The swim school was highlighted in the 2006 Kevin Costner movie The Guardian, parts of which were filmed in Elizabeth City. In the private sector, aerospace and defense suppliers have a sizeable economic impact on the region. They include Spirit AeroSystems, AAR Cargo Systems, which bases its engineering center in Goldsboro, UTC Aerospace Systems – Kidde Aerospace, Honeywell and T-COM, among others.

The aerospace sector in eastern North Carolina employs some 14,000 workers. These highly skilled workers are being trained locally at the region’s community colleges. Programs include the College of The Albemarle’s FAA-certified Regional Aviation & Technical Training Facility at Currituck Regional Airport and aviation science programs at Elizabeth City State University.

Many of them will work for employers who have been assisted by the NCEast’s Rural Jobs Accelerator (RJA), which works to grow the local supply chain in automotive and aerospace for small and medium-size manufacturers. The RJA is a joint effort of the NC Rural Center, the NC Small Business and Technology Development Center, and NC State University’s Industry Expansion Solutions.