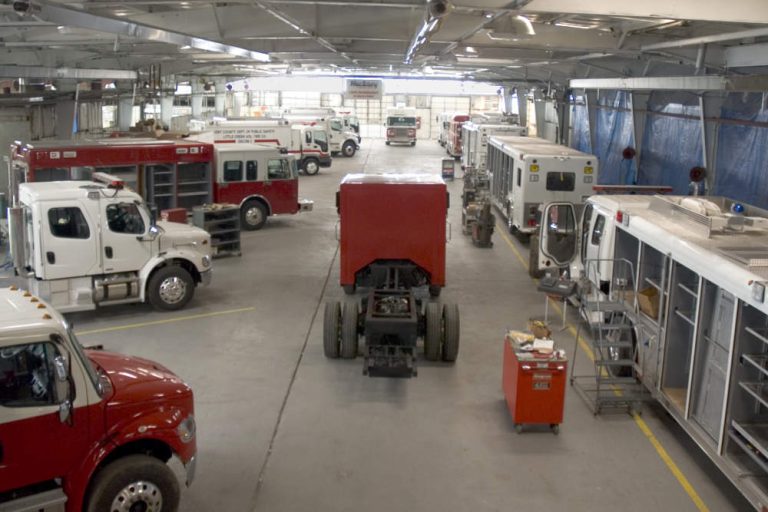 Aluminum-bodied trucks ferry some of America’s most iconic brands to market, including Budweiser, Pepsi, Coke and Crystal Rock, to name a few. These truck bodies are the handiwork of VT Hackney, a manufacturer based in Washington, NC. – a town of 10,000 in Eastern North Carolina. The company invented and first began turning out truck bodies for the consumer-beverage industry in 1946. Its line now includes emergency vehicles, service-company trucks and specialty vehicles as well.

VT Hackney isn’t alone. Eastern North Carolina is home to a thriving – and growing – motor vehicle manufacturing industry that assembles lift trucks and farm equipment and makes parts for cars, as well as trucks, trailers, tractors and recreational vehicles. More than 40 Eastern North Carolina companies build automotive engines or engine parts. Scores of other firms make everything from transmissions to tires. NACCO Materials Handling Group has been making components for and assembling varieties of its Hyster-Yale lift trucks in Greenville since 1974.

In 1997, NACCO consolidated its Hyster-Yale operational and marketing headquarters, establishing its Americas headquarters in Greenville, relocating nearly 200 employees from Illinois and New Jersey to the area. The Greenville facility now oversees all North, Central and South America operations. One of the newest to arrive in the region is Canada-based Linamar Corporation, which manufactures engines and transmissions and recently invested $40 million to acquire Wilson-based Carolina Forge Company. The manufacturer expects to add 125 jobs in Wilson through 2019.

“We are excited about the completion of this acquisition bolstering our presence in North Carolina and establishing us firmly in the forging business in North America,” says Linamar CEO Linda Hasenfratz. “We have had a great experience so far in North Carolina with a great skilled and motivated employee base and lots of opportunity in the region.”

One major engine and parts maker in the region is Consolidated Diesel, which assembles diesel engines in Rocky Mount and employs more than 1,000 people. Others include Stanadyne, which produces diesel engine parts in Jacksonville, and small machine shops that provide critical components for engine manufacturers in the state and beyond.

Employers who set up shop in Eastern North Carolina do so for many reasons, but chief among those is the region’s rich talent base. Greenville, a metro area with a population of nearly 200,000, is home to Eastern Carolina University (ECU), which boasts a nationally acclaimed engineering program. The region also has 15 area community colleges that offer training in advanced machining, engineering technology, welding and other skills vital to the industry. VT Hackney attracts a long line of applicants for its manufacturing and technical jobs, owning in large part to the region’s excellent network of vocational and technical high schools. “We are fortunate to enjoy a very low turnover at our Washington facility, with many employees marking 20, 30, 40 and even 50 years of service each year,” says Richard Ball, VT Hackney’s director of marketing.

“Most people who live here will tell you that we’re a great place to work and offer good employee benefits. What also attracts people to work for us is the consistency in our business and our excellent safety record.”

Motor vehicle manufacturers in the region also benefit from proximity to a strong supplier base that includes numerous certified machine shops and firms like Nucor, which makes steel plates for the automotive industry and operates a facility in Hertford County.

Along with domestic companies, several international automotive suppliers call Eastern North Carolina home, including Japan-owned firms like AMSO Greenville of NC Inc., in Greenville, Keihin Carolina System Technology (KCST) in Tarboro, Bridgestone/Firestone in Wilson and Uchiyama in Goldsboro. Bridgestone’s Wilson plant, which produces more than 32,000 passenger tires daily, recently became the world’s first manufacturing facility to be UL certified for zero-waste-to-landfill, and it earned an ISO 50001 certification for reducing its energy use. KCST has also been recognized for initiatives to make its factory greener. Another automotive supplier thriving in the region is Cooper Standard, which produces parts in Goldsboro for GM’s Chevy Cruze, Dodge sedans and the BMW X15.

Eastern North Carolina also has a dedicated facility for testing new automotive and motor vehicle designs – the North Carolina Center for Automotive Research (NCCAR) in Garysburg. NCCAR features a two-mile test track, skid pad, garage and a secure facility for monitoring tests. The facility, which opened in 2010, hosts a nonstop series of prototype testing and other special events. North Carolina high school students participating in the Shell Eco-Marathon, for example, have used the track to test designs for alternative-fuel vehicles, according to operations manager Sam True. When the facility first opened, tests took place once a week, True says, but now “NCCAR has really caught on,” especially among small- and medium-sized manufacturers involved in research and development. “Having this facility here makes this region an important part of the automotive industry,” he says.