The life sciences sector in Eastern North Carolina is on a growth curve. 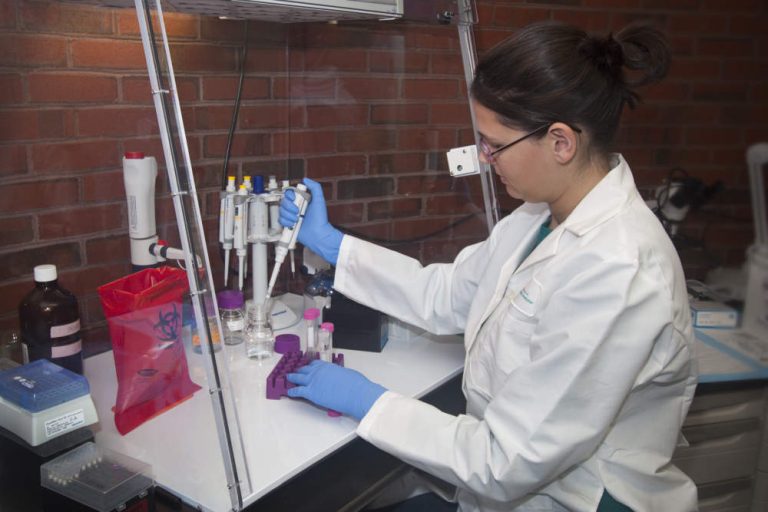 “The level of access here to local and regional authorities who are life science-centric is helpful, and there is a wealth of networking resources for finding job candidates,” says CEO Michael Heffernan. “We believe Eastern North Carolina and Pitt County, in particular, has tremendous potential as a life sciences and biotech hub.”

Another life sciences firm, Metrics, a global manufacturer specializing in oral and topical dosage forms, has a symbiotic history with Greenville, dating to 1994 when the company was founded by an East Carolina University medical school scientist and a Burroughs Wellcome employee. Even though it is now a subsidiary of Australia’s Mayne Pharma Group Limited, when Metrics needed a new $1.6 million lab, it selected Greenville. “Metrics and Greenville are tightly connected because we have a strong and mutually beneficial relationship with East Carolina University from which we recruit many of our scientists and technicians,” says Jeff Basham, president of business development.

“Tapping into Greenville-centric scientific talent is one reason why our employee turnover rate is so low; people are happy to be in Greenville doing work they enjoy.” To cultivate this talent, Pitt Community College and East Carolina University offer programs from basic biotechnician training to a B.S./M.S. in chemistry, biology and biochemistry, as well as the M.S. in biotechnology and biomedical engineering and Ph.D. programs in microbiology and biochemistry.

“The upfront preparation of our workforce means that a company spends less time on training,” says Wanda Yuhas, executive director of the Pitt County Development Commission.

“All the technology at the facility is proprietary to DSM and leverages our decades-long history of materials innovation,” says Carola Hansen, director of Biomedical Polyethylenes for DSM Biomedical. Hospira, the world’s leading provider of injectable drugs and infusion technologies, recently announced planned investments of more than $200 million at its Rocky Mount facility, including a quality and analytical testing laboratory at its Rocky Mount facility. “Through advanced technology and additional space, we’ve been able to increase our production levels and ensure more consistent release of products, ultimately supporting our ability to provide a more sustainable supply of life-impacting drugs,” says Marty Nealey, vice president of Rocky Mount operations. Medical device maker BD (formally known as Becton Dickinson & Co.), which manufactures newly approved prefilled safety syringes in Wilson, recently expanded to keep up with projected demand.

Wilson’s geographic location is a plus for life science companies. “We are the central point between Raleigh, Rocky Mount, Greenville, Goldsboro and Clayton,” says Jennifer Lantz, executive director of the Wilson Economic Development Corporation. “As a result we are able to draw employees from a workforce of 165,000.”

Wilson has invested heavily in infrastructure because of the direct payoff. “The life science industry creates five additional jobs in the economy for every direct job it creates,” Lantz says. “Such companies typically invest between $300 and $6,000 per square foot of space, far higher than most industries today.” Pitt County Development Commission’s Yuhas concurs. “We expect to see continuing expansion of our life sciences and pharmaceutical labor forces,” she says. “In turn, more education and training programs are being created with guidance from our corporate partners.”