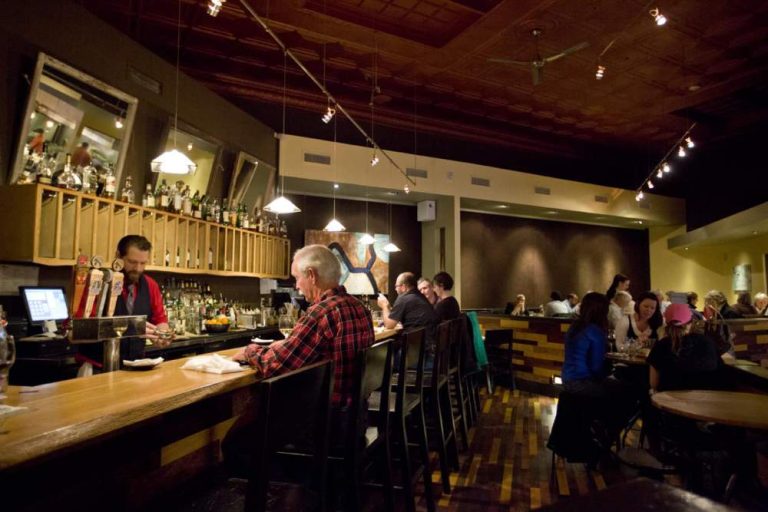 Eastern North Carolina’s distinctive attractions bring visitors to the region in droves, while also providing a high quality of life for those who live there. Charming and hospitable towns abound throughout the region, drawing crowds for their food, history, arts and culture, and more. Historically, the region has been known for is delectable seafood and wood-cooked, pork bareque, but the culinary delights are evolving. Chef Vivian Howard and her husband Ben Knight moved from New York City to pioneer the farm-to-table movement in her hometown of Kinston. Chef and the Farmer opened in 2006 and helped launch a diverse dining, arts and entertainment district downtown. In 2012, Howard and Knight also opened the Boiler Room, an oyster and burger bar that features locally grown meats and craft-brewed beer.

“We set out with the goal to use as many local farmers to procure our ingredients as possible,” Howard says. “Initially our style of food was all over the map, but about two years in I made a dish called blueberry barbecued chicken, which was a take on Eastern North Carolina-style vinegar-based barbecue. It really seemed to resonate with people, so we started doing that with a lot of our food – translating the regional specialties into a more modern context.” The Peabody Award-winning PBS television series A Chef’s Life follows Howard through farm, field and kitchen and has put a national spotlight on the restaurant and the region.

About 80 percent of Chef and the Farmer’s guests come from out of town, as do most patrons of On the Square Restaurant & Wine in historic downtown Tarboro. Specializing in wine and food pairings, its seasonally driven menu also celebrates local bounty. A bed-and-breakfast as well as a restaurant, SoCo Farm and Food in Wilson serves an exquisite prix fixe menu in a tobacco barn-turned-dining room on the owners’ working 11-acre farm. Family-owned StarLight Café in Greenville features farm-to-table fare in the European tradition, with many ingredients coming directly from the Boutilier family farm. “We’ve got a good bit of stuff out there,” says executive chef Tobias Boutilier. “Local farmers fill in the rest. We also get a lot of great local seafood.” Fishing-industry organizations such as Carteret Catch promote the local seafood for which Eastern North Carolina is known and encourage its use among area restaurants.

History is a major draw in the region for visitors and locals alike. Eastern North Carolina’s coastal region echoes with colonial and Civil War history, and historic sites and structures. Towns such as Greenville, Rocky Mount, New Bern, Beaufort, Kinston, Wilson and many others offer due homage. History and the arts intersect in Wilson, where several internationally renowned artists – including acclaimed photographers Burk Uzzle and Jerome De Perlinghi – have purchased and restored historic properties and subsequently produced works inspired by the town. Preservation of Wilson plays a key role in attracting artists. “What we do is market these dilapidated properties that still have historic integrity,” says Executive Director Kathy Bethune. “The houses are very affordable.”

Wilson’s arts-driven economic development strategy helped bring the Vollis Simpson Whirligig Park downtown in 2014. “The soul of our community has embraced creative ways to keep us strong,” Bethune says. “Wilson is more than history; it’s got a bright future.” Cultural appeal is also an integral part of Greenville, which established the Pitt County Arts Council in 2009 to promote the arts as a driving force of economic development in the city and its surrounding area, says Executive Director Holly Garriott. The Down East Sculpture Exhibition showcases public art throughout the county, and Emerge Gallery in Greenville offers classes for kids and adults. A comprehensive online arts and cultural calendar for residents publicizes the plethora of things to do and serves as a key recruitment and retention tool for Pitt County.

“It’s not just that the arts make you feel good,” Garriott says. “The arts make money for our community.” The arts in Greenville also include the 1000-plus events that take place in association with the ECU College of Fine Arts – music, dance, and drama, as well as painting and sculpture exhibitions. Other top attractions in the region include Tryon Palace and the $65 million exhibit-packed North Carolina History Center in New Bern; the Imperial Centre for the Arts & Sciences, which includes a children’s museum, in Rocky Mount; the North Carolina Maritime Museum in Beaufort; the North Carolina Baseball Museum in Wilson; and the Core Sound Waterfowl Museum & Heritage Center on Harkers Island. Also popular are the numerous festivals that celebrate the region, such as the Carolina Chocolate Festival, the NC Pickle Festival and the North Carolina Seafood Festival to name just a few of the dozens of festivals happening throughout the year in small towns as well as the metropolitan centers. Find out what it’s like to live in Eastern North Carolina.