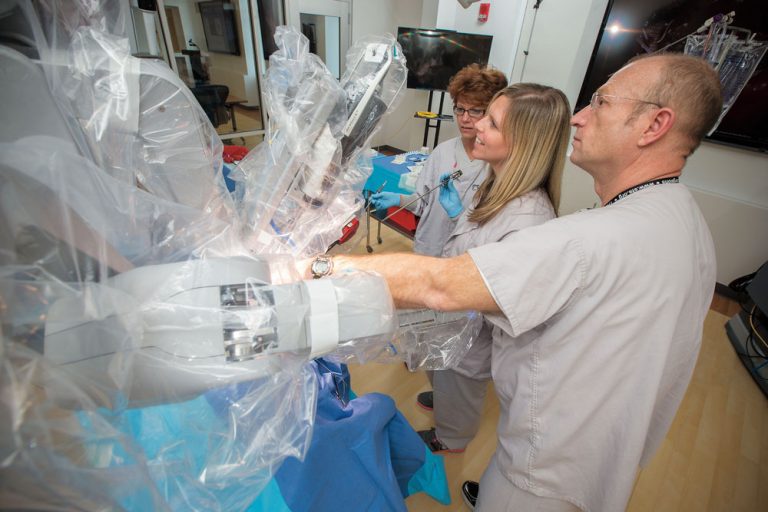 Thanks in large part to research conducted at East Carolina University and its Brody School of Medicine, Eastern North Carolina has easily earned a reputation as a hotbed of health care and life sciences innovation.

The university is a leader in areas such as cardiovascular care, obesity and diabetes treatment, and its awards for cutting-edge health science research average more than $49 million per year.

Jitka Virag, a professor of physiology within ECU’s Brody School of Medicine, has been studying a protein in the heart believed to help limit the damage to the heart caused by heart attacks.

“Heart attacks are the No. 1 cause of death in the U.S. and there is no cure. We have discovered that ephrinA1, a protein found in healthy cardiomyocytes in mouse (and human) hearts, can be administered at the time of onset to reduce the injury that occurs during a heart attack,â€ Virag says. “Although we have a long way to go to move this into the translational realm, there is great potential to save lives and promote well-being in susceptible populations. This will hopefully include those with additional chronic health conditions such as diabetes and obesity, which are prevalent conditions in Eastern North Carolina.”

The university is currently constructing a $90 million Life Sciences and Biotechnology Building adjacent to its Millennial Campus that will attract industry partners and serve as a uniquely rural-based research facility for new discoveries. The Millennial Campus is a 22-acre area in downtown Greenville developed by ECU to spur collaboration with private companies and foster economic growth.

In addition, ECU is investing in a new $5 million off-campus greenhouse to support biotechnology research and support regional rural businesses. These two investments will give students, researchers and industry partners space to grow and launch new ideas, inventions and solutions to tackle needs in the life science sector.

ECU and its research play a major role in the growth of the life sciences industry in Eastern North Carolina. In 2017, ECU launched seven pan-university research clusters – with an eighth planned to launch in fall 2018, says Jay Golden, a professor of engineering and vice chancellor for ECU’s Division of Research, Economic Development and Engagement.

“These research clusters focus on many areas in the life sciences industry – including natural resources and the environment, health behavior, human health and disease, marine and coastal research, precision health, biomedical sciences and engineering – and bring together faculty from across disciplines to share new ideas and collaborate, allowing them to solve problems in the life sciences sector,â€ he says.

ECU also boasts a number of current and forthcoming resources available to startup companies in the life sciences sector. The Miller School of Entrepreneurship hosts the university’s Idea Lab, open to faculty, staff and students who have a business idea. The university’s Commercialization Hub, a pilot program, helps biomedical research faculty transform scientific discoveries into commercially viable products and services.

Sharon Rogers, an ECU professor, developed Sportscale, a kiosk-like device that monitors athletes’ levels of dehydration during sports practices. She says the university was not only helpful in securing the patent for Sportscale but also assisted in promoting the device through print and social media once the patent was issued.

“ECU provides a network of colleagues, experts in many areas. From designing to marketing, there is someone on campus willing to chat with me over coffee to offer suggestions or connect me to another network of professionals,â€ Rogers says.

Phil Hodges, ECU graduate and founder of Metrics, which became Mayne Pharma, notes that the university’s support of life sciences companies has been essential to the vitality of the industry in the region.

Hodges now serves as board chairman for RFPi, which patented a technology that enables physicians to visualize and quantify the anatomy and the physiology of blood flow. He says the company actually spun out of ECU and is still housed on campus.

“In the last 20 years, there’s been an increase in the number of small businesses [in the life sciences industry.] And it’s fueled by entrepreneurs who want to start a business and spin out technologies that they have developed or come in contact with. The university was key to all that,â€ Hodges says.

ECU will soon launch its micro-business initiative tied to the Miller School of Entrepreneurship. The micro-business program will see students focus on startup development from their freshmen to senior years. The university also plans to open the $10 million Van and Jennifer Isley Innovation Building by 2020, which will support innovative designs and prototyping, allowing innovators of different backgrounds to connect.

“The hub will be the home to a world-class fabrication and rapid-prototype workshop run by the College of Engineering and Technology and will provide students with the latest technology and tools needed to become leaders in product design and creation,â€ says Golden. “Inventors, researchers and creators in the life sciences field, whether they’re current students, faculty member or regional industry leaders, have the spaces and resources at ECU to successfully develop and grow their start-up businesses.”