Learn how innovative STEM and global awareness programs give students skills they need for the region's expanding workforce. 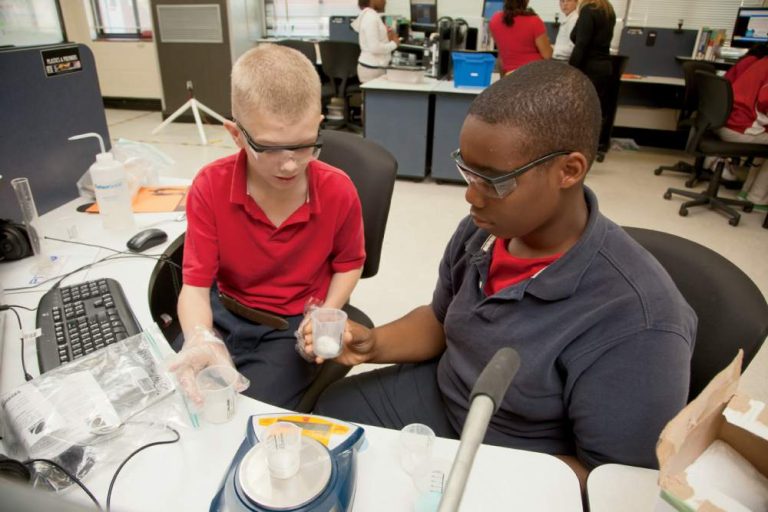 A wave of investment, both domestic and foreign, has spurred job growth across the Eastern North Carolina economy, including the region’s aerospace, life sciences, advanced manufacturing and beverage and food processing industries. The region’s school systems, colleges and universities have quickly responded to growing workforce demands by adding innovative new programs in STEM (Science, Technology, Engineering and Math) and dual-language immersion to prepare students to work in a more global, high-tech economy.

“We’re living in a global economy today, and many of our companies -– whether they’re foreign-owned or one of our domestic homegrown companies –- are doing business on an international scale,” says John D. Chaffee, president and CEO of NCEast Alliance, the region’s chief economic development organization. “The ability to produce individuals within our own region who are tech-savvy and speak at least two languages is important.”

With dual-language immersion and the international curriculum, Chaffee says, students gain a cultural understanding of other places around the world.

“They may deal with other cultures when they’re in business, and they’re having to be involved in conversations and negotiations with people situated in Europe, Asia and elsewhere,” Chaffee  says.

Learning Through Language Recognizing this need, several of the region’s school systems, including Greene, Onslow, Duplin, Dare and Pasquotank counties, joined with public and private organizations to establish the North Carolina Global Schools Network, an education initiative that works to equip students with the language and 21st-century skills required to compete and collaborate in a global marketplace. Onslow County Schools, for example, begins dual-language immersion curriculum in kindergarten. In middle school, those students graduate into instruction of the language through a content area, such as social studies, and are also introduced to a third language. By high school, students should be fluent in at least two languages.

“What we found in all of the research was that when you look at business and industry there really was a need for employees to have experience in more than one language,” says Dr. Lesley F. Eason, associate superintendent of Onslow County Schools. “In Eastern North Carolina, the biggest need that kept showing up was a need to be able to interpret and understand the Spanish language, which is why all of our immersion programs are currently Spanish immersion programs.” Greene County schools have an immersion program in place for so long that the district has graduated its the first class of dual-language students.

East Carolina University (ECU) established its Global Understanding course to expose students to a wide range of cultures and foster cross-culture communication. It’s important for students to be exposed to other cultures for many reasons, including being more aware of who they are and their place in the world. And, there are also more practical reasons, says Jami Leibowitz, interim director of the Global Understanding program at ECU. “As companies look for the best candidates for employment and also the best locations for their facilities, borders become blurred,” Leibowitz says. “Many companies, including in Eastern North Carolina, are multinational and have employees from many countries. Being able to effectively work across [cultural] boundaries is increasingly important.”

The region’s education community is honed in on the needs of high-growth industries and has responded by establishing specialized schools to train students in STEM-related (Science, Technology Engineering and Math) fields while also invoking ‘Strategies That Engage Minds.’ East Carolina University’s Advanced Manufacturing and Innovation Academy exposes public school students to its advanced manufacturing program. The new Northeast Academy for Aerospace and Advanced Technologies, an aviation-focused STEM charter school in Elizabeth City, and the Northeast Regional School of Biotechnology and Agriscience in Jamesville, were part of the NC New Schools program. STEM East, a partnership of schools, businesses and the NCEast Alliance, works to introduce STEM into middle schools. Its efforts have assisted in bringing nearly $10 million into roughly 60 public schools to deploy STEM Learning Centers in over a dozen school districts. The bigger benefits have been more interested/motivated students, improved classroom behavior, and increased performance on year-end tests in science and math (especially among minority students). The focused effort on middle school students is intent on generating greater career awareness and interest in science, math and technology in high school.

The Northeast Regional School of Biotechnology and Agriscience serves high school students from five counties and focuses curriculum on biotechnology and agriscience, two of the state’s largest industries (each have over a $70 billion impact). The school also partners with Martin Community College, NC State University, Beaufort Community College and Pitt Community College to give students (many of whom are first-generation college students) the opportunity to simultaneously earn up to two years of college credit. Hal Davis, principal of the Northeast Regional School of Biotechnology and Agriscience, says the school is certainly strong in science, technology, engineering and math, but its strength extends beyond the blackboard.