Built on the furniture industry, High Point has commercial connections to Asia and beyond 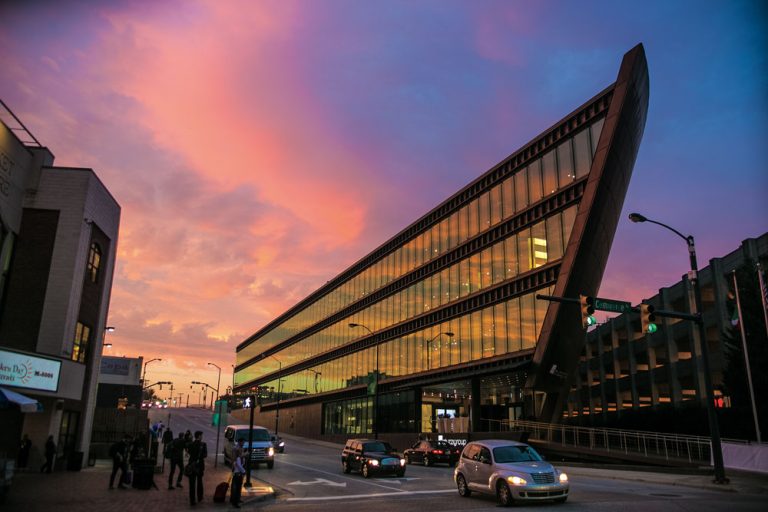 High Point / Courtesy of the City of High Point

Over the past 150 years, High Point has transitioned from an important railroad junction to a hub of international business for a multitude of industries.

High Point’s economic rise began somewhat modestly, with the furniture industry. Located in an ideal place along the North Carolina Railroad, High Point’s citizens had a tradition of furniture-making and easy access to raw materials like lumber and cotton. These raw materials and the ability to ship out finished goods helped to support High Point’s first furniture factory, which opened in 1889. By the 20th century, there were more than 30 furniture companies in the city, according to the High Point Chamber of Commerce.

“Somebody in High Point got the bright idea that look, if we were to consolidate all of our product showing into a central place it would make it much easier for the buyers, much more efficient and there is a good chance that the buyers would see more of us,” says Tom Conley, president and CEO of High Point Market. “Because obviously if you have a two-week buying period there are only so many stops you can make. So the Southern furniture market evolved 108 years ago with the idea that the buyers would come to High Point and it was a one-stop shop.”

With the furniture industry needing to show its wares in various publications, a thriving photography industry quickly sprung up around High Point. The high-end studios in and around High Point diversify the local economy and bring in a substantial amount of revenue, with companies like Macy’s, Lowe’s and Bloomingdale’s regularly shooting their products in the city.

A few studios that started in High Point now have offices around the country and the world. Kreber is a photography-based marketing agency with branch offices in Atlanta and Columbus, Ohio. Albion Associates Photography Studio expanded its operations in 2008 to Vietnam, opening a studio in Ho Chi Minh City.

Discover Why High Point, NC Offers the Best of All Worlds

High Point is about more than just furniture and its spin-off industries, however. The city also has thriving industrial and tech sectors.

High Point also has a thriving industrial sector, Thomas Built Buses being the sector’s biggest employer. In June 2016, the vehicle maker announced it had hired or was planning to hire more than 400 new employees.

Forming the Piedmont Triad with nearby Greensboro and Winston-Salem, High Point is fast becoming a destination for global companies. The city consistently ranked as one of the lowest-cost locations for Fortune 500 headquarters among 30 major US metros. Companies have likely been attracted by High Point’s location in a right-to-work state with a low corporate income tax.

“We have more manufacturing workers in Guilford County (where High Point is located) than any other county in the state of North Carolina,” says Sandy Dunbeck, executive vice president at the High Point Economic Development Corporation. “That is a stat we are very proud of and that means something as we try to recruit manufacturers.

“But at the same time, we support and encourage the technology sector as it relates to all businesses, but particularly companies that just focus on software development, like Superion.”

Make Every Weekend in High Point, NC the Best Weekend with these Getaways

In addition to a thriving economy, High Point has dynamic educational facilities, including more than 100 public and charter schools, as well as several colleges and universities.

High Point University is one local university that receives national recognition year after year. In 2017, U.S News and World Report ranked High Point University as its No. 1 on its Best Regional College South list. Within that category, the school was ranked No.1 for Best Undergraduate Teaching and No. 1 in Most Innovative Schools rankings.

Besides being a top-caliber learning institution, HPU also contributes to High Point in a number of ways. The university is a member of NCAA Division I athletics and has eight men’s and eight women’s varsity teams residents can cheer for, with athletic events held throughout the year.

The school and its students also support the surrounding community with charitable programs. In 2016, the school helped raise more than $240,000 for the United Way of Greater High Point. In October 2017, it was announced that HPU students donated nearly 1,000 books to local children.

Many of those children attend the more than 100 public, private and charter schools in the area. One standout school is Penn-Griffin School for the Arts, ranked by U.S. News and World Report as one of the Top 25 high schools in the state. The arts magnet school educates grades 6 through 12 and features elective classes for band, chorus, classical guitar, dance, orchestra, piano, theatre and visual arts. These classes are taught by full-time arts teachers who are also working professionals in their individual areas. Students from HPU and other nearby universities often serve as mentors, classroom assistants and volunteers at Penn-Griffin.