Learn how having a beer at Mother Earth Brewing in Kinston, NC can help save the planet. 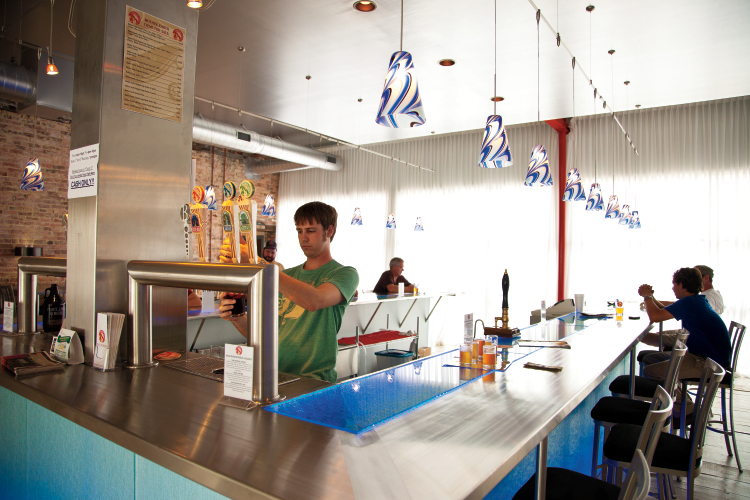 It may sound sappy, but love is what started Mother Earth Brewing in Kinston, NC. Trent Mooring and Stephen Hill, the brewery’s founders, shared a love of home-grown vegetables and hand-crafted beer. They became even closer when Mooring married Hill’s daughter. Soon conversations about family brewing recipes turned into taste testings, trips to beer festivals and ulitmately a business plan.

Longtime organic gardeners and avid outdoorsmen, they knew from the outset that building and maintaining a low-impact business was a must – as important as brewing great artisan beer or giving downtown Kinston a boost.“We felt that was part of our whole concept and what we wanted to do,” Hill says. “What’s good for the environment is good for us.”

Some businesses’ environmental commitment might stop at biodegradable to-go boxes. But Hill and Mooring’s new Mother Earth Brewing company went green every way it could. For starters, they opted to rehab an old downtown building, in the process reusing its iron, steel, bricks and other material. Paint? Low-VOC. Carpet? Recycled fiber. Ceiling insulation? Soy-based. Renewable tap handles are custom made of bamboo.

Their non-freon chiller system cools with glycol. Toilets are “one-up, one-down” water savers; the hot water heater heats on demand, saving energy. A cistern is planned to provide water for landscaping. Used grain is given to farmers, who use it for tasty livestock feed – except for what is turned into eco-friendly soap.Particularly interesting is the blue-jean insulation used in the walls. While more expensive than regular fiberglass insulation, it’s considerably easier on the environment and healthier for people – and it has another advantage.

“While we were building we had to replace the roof here. It rained and all the blue jean insulation got wet,” Mooring says. “We called the factory and asked, ‘What do we do now?’ Turns out all we had to do was hang it out on a clothesline to dry.”

Mother Earth also installed solar panels on the roof of the building, which generate enough electricity to run the tap room.

Learn more about the food culture in Kinston.