Museums and historic sites help Johnston County and Smithfield, NC keep its vibrant past alive while also attracting tourists from around the world. 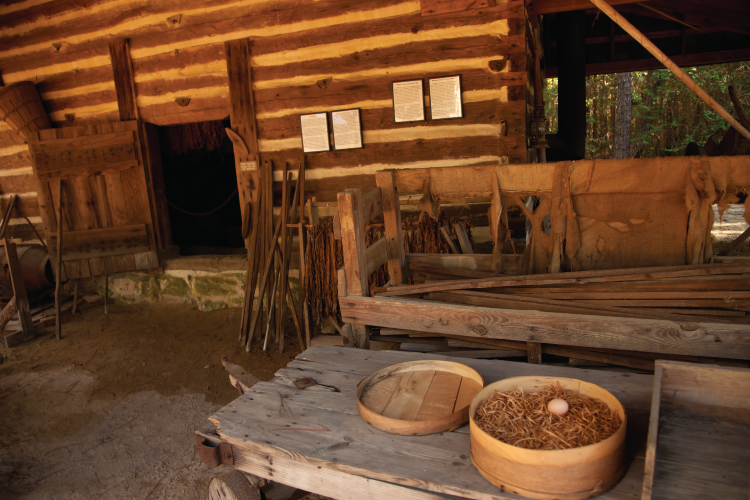 Although it’s a very forward-looking place, Johnston County also treasures its past, displaying and honoring traditions and history so rich that visitors come from around the world to experience them.

Leading the charge, literally, is the Battle of Bentonville. From March 19-21, 1865, the Confederate Army mounted what would be its last full-scale, tactical offensive in the largest battle fought in North Carolina. While the Confederates failed to stop Gen. William T. Sherman, their efforts over that three-day period bring visitors to the site every year for reenactments, reunions and other events commemorating the battle. The site is also part of North Carolina Historic Sites, a program of 27 sites around the state that highlights various aspects of its history.

Many of those soldiers went on to be farmers, and even today tobacco growing is synonymous with North Carolina. While many are now raising other crops, the cultural tapestry created by tobacco here is celebrated at the Tobacco Farm Life Museum in Kenly.

The museum is a combination of modern facilities and a restored, early 20th century farmstead. A 4,000-square-foot gallery showcases eastern North Carolina farm life; the remainder of the facility is given over to permanent and rotating exhibits on everything from Southern medicine to social life. Permanent exhibits include Cultivating Minds, a look at education in rural North Carolina; From Chores to Church, which explores textile manufacture and use in this part of the state; Community Caregivers, a tribute to the rural doctors who served many vital roles in small communities; and the Tobacco Warehouse, which explores the buying and selling of tobacco and the industry surrounding the golden leaf after it left the farm.

Out on the property, the farmstead features a smokehouse, log tobacco barn, milk shed and more in a collection of buildings donated by several people in the local community. They buildings hold exhibits depicting rural Carolina farm life during the Great Depression era.

All this and more is revisited at the Johnston County Heritage Center, which acts to preserve all aspects of the county’s history and culture.

The center was formed in 1997 as a department of the county government, and is operated by the county and an 18-member commission. It opened in 2000, in the renovated former First Citizens Bank in downtown Smithfield, and has exhibit space, artifact storage and as its centerpiece the Johnston County Room, a varied and comprehensive collection of local history and genealogy.

Preserving all things local is the mission of the Benson Museum of Local History as well. The museum, established in 1987, features a collection of railroad memorabilia, antiques and quilts, as well as a diverse and growing array of farming and hardware artifacts. The museum’s pictorial and newspaper collection, at its new downtown Main Street location, chronicles the lives and events of significant local families.

Learn about more cultural happenings in the Smithfield area.