International cuisine, traditional American fare – and everything in between. 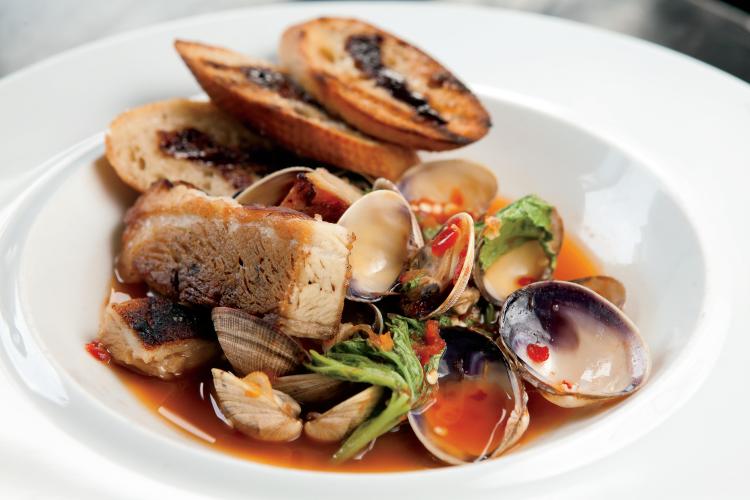 Fargo foodies have a lot to be proud about when it comes to the local restaurant scene. Innovative foreign cuisine jostles good ol’ American standbys, sometimes on the same menu. This is a city that likes choice when it comes to eateries, and its restaurateurs have responded in a big way.

“We have a variety, and the majority of our retaurants are locally owned so they add a lot of flair and personality unique to Fargo,” says Mike Hahn, president and CEO of the Downtown Community Partnership. “They help our downtown core stay vibrant, but also add to the overall personality of the community.”

One of the best-known players on Fargo’s restaurant roster is Mezzaluna, which hangs its hat on the use of fresh, local ingredients in a rotating menu.

“We’re definitely known for our duck, but people also really like our seafood, which we have flown in,” says Sara Watson, who along with husband and chef Eric owns and operates Mezzaluna. “Fargo loves its food, and in the eight years we’ve been here we have found it to be a really special place.”

While there’s fine dining to be found all over Fargo, the city center is a great place to find a serious concentration of quality restaurants.

If wine’s your thing, then don’t miss Taste of Italy, which continues to add traditional wines to its offerings. A well-known spot for romantic dinners, the restaurant also has private dining rooms and banquet facilities for larger parties.

A taste of Tuscany is also on offer at Toscana, which promises an escape to Italy in everything from seafood dishes to the décor itself.

Over in the Hotel Donaldson, the HoDo Restaurant continues to be a local favorite. Its “come as you are” ambiance belies the care and attention that goes into its food.

Like your dining with a twist? Then try the martinis at Monte’s Downtown, which blends upscale cuisine with urban hip.

The organic vibe continues at the Green Market Kitchen, where fresh-daily cuisine mixes everything from flax crepes to socca (chickpea) cakes with red pepper mojo.

Want a view with that truffle mac and cheese? Then don’t miss Usher’s House, overlooking the Red River from its perch in Davey Memorial Park.

If you haven’t filled your dining calendar yet, then be sure to mark down Maxwells, one of North Dakota’s most award-winning restaurants.

Steaks and seafood also lead the bill of fare at the Cork ’n Cleaver, which also is rightly known for its amazing salad bar.

You’re a long way from Kentucky, but if you need a Hot Brown sandwich, then stop over at John Alexander’s, where casual dishes are elevated to fine-dining status.

Food on the fly also has its place in Fargo, where a quick, casual meal, snack or drink is easy to find and enjoy.

On the pizza front, look no further than Rhombus Guys, whose unique visions have led to many a satisfied customer over the years.

And for a memorable burger, try JL Beers, where the Humpty Dumpty has made a believer out of many.

Lighter fare can be found at Nichole’s Fine Pastry, where soups and salads nudge up against such daily features as house-made gelato and sorbets.

If you need to feel important, then don’t miss the VIP Room. Large dining rooms with local art and classical music provide a relaxing dining experience.

Then there’s Bertrosa’s Cafe, which introduced Vienna all-beef hot dogs to North Dakota. As they like to put it, from one Windy City to another, enjoy!