This Nebraska City Is Obsessed With Kool-Aid

Hastings is the birthplace of the iconic drink — and they're brewing Kool-Aid beer to celebrate. 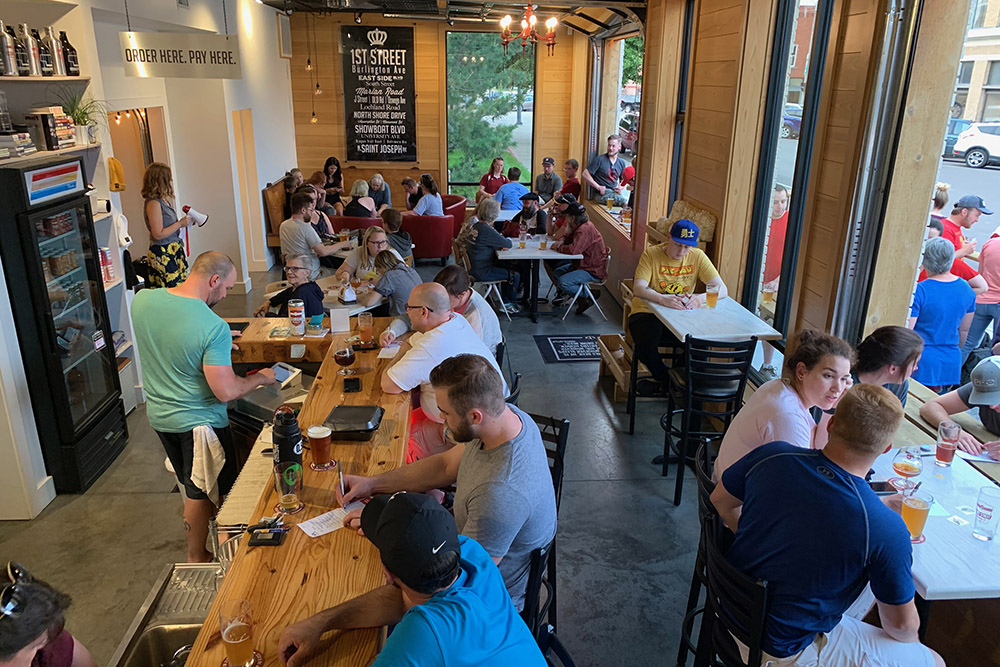 When Nathan and Jessi Hoeft opened First Street Brewing in Hastings, Nebraska, they kept getting the same request over and over: Make a Kool-Aid beer, please.

But as a beer aficionado, Nathan Hoeft was reluctant to just dump the fruity drink mix into some random beer and call it a day.

“Trying to keep that Kool-Aid flavor in a beer is not really that easy,â€ says Nathan Hoeft, 42.

But two years ago, he finally stumbled across the perfect beer to add a little Kool-Aid twist to – the Berliner Weisse, a traditional German sour beer that’s typically served with Woodruff or raspberry syrup for extra sweetness. Thus, the “Burlington Weissâ€ was born at First Street Brewing (Burlington is the name of Hastings’ main north-south street).

If you order a Burlington Weiss today, the bartender will pour you a light, reddish-gold beer with a foamy head, then squirt a little Kool-Aid syrup on top. And it’s delicious. 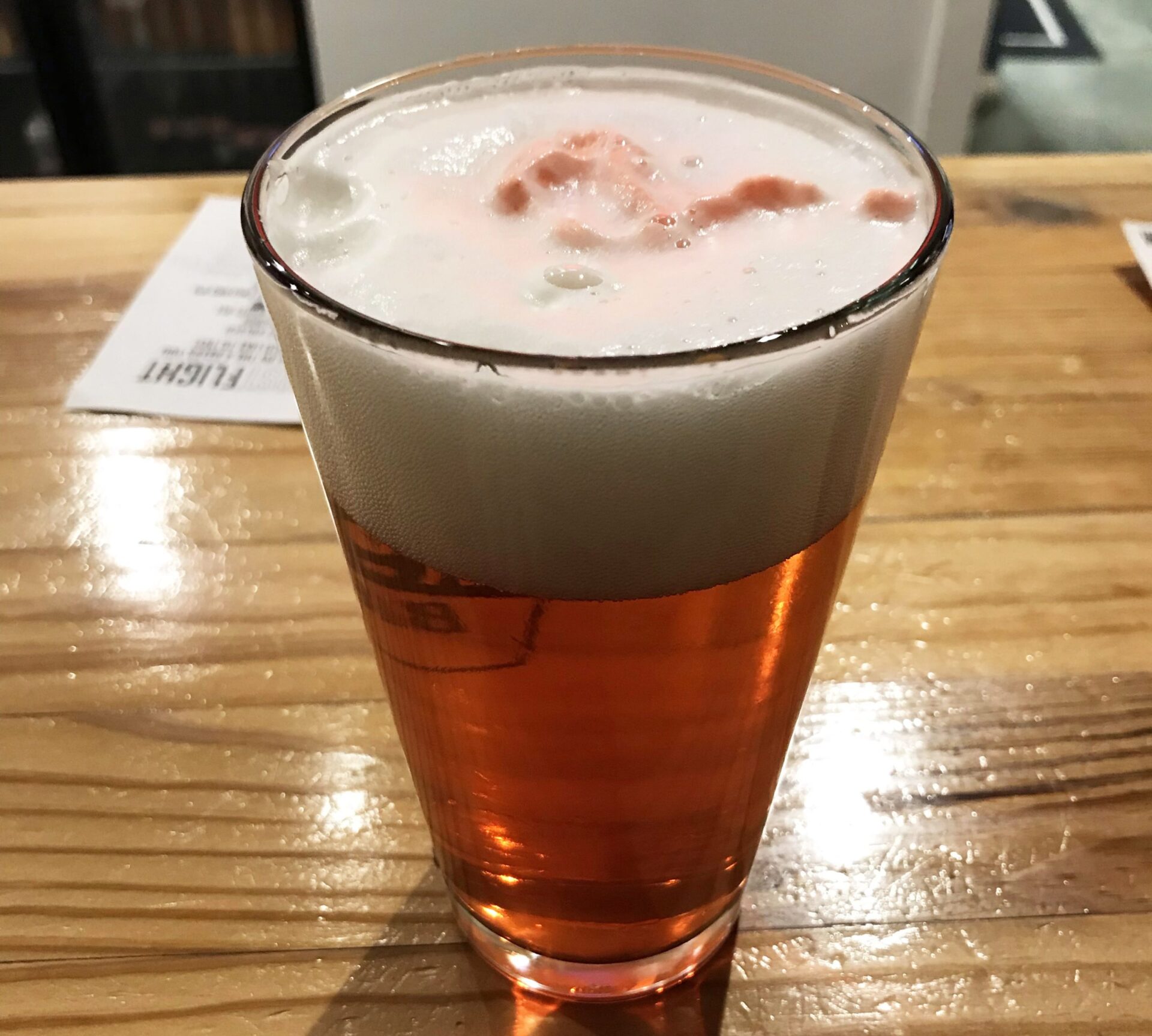 “This was a way that we could add some true Kool-Aid flavor to a beer without cooking it into it,â€ says Nathan Hoeft, who co-founded the brewery with his wife in 2016. “And it gives people the ability to have as little or as much (Kool-Aid flavor) as they want; some like it a little sweeter, some don’t.”

In case you couldn’t tell, Hastings has a deep love affair with Kool-Aid, the flavored drink mix with a larger-than-life mascot who breaks through walls yelling his signature catchphrase, “Oh yeaaaah!â€

After all, this central Nebraska city is where Kool-Aid was born, and Hastings’ 25,000 residents have a lot of pride in that heritage.

Since 1998, the city has hosted Kool-Aid Days, an annual festival dedicated to all things Kool-Aid with quirky events like a “kardboardâ€ boat race and a 0.5K running and walking race. There’s also a parade and the world’s largest Kool-Aid stand, where you can try tons of Kool-Aid flavors.

Year-round, you can walk through an extensive exhibit on the history of Kool-Aid at the Hastings Museum, the largest municipal museum between Chicago and Denver. The exhibit also describes the ever-evolving memorabilia, clever advertising tactics and varying flavors of Kool-Aid throughout the ages.

“It gives us joy to be known as ‘The Birthplace of Kool-Aid,’â€ says Anjanette Bonham, executive director of the Adams County Convention and Visitors Bureau. “We’re a midwest city in the middle of America that attracts visitors from all over the United States and beyond, who come here because of our connection with the world-famous colorful sweet drink of Kool-Aid.” 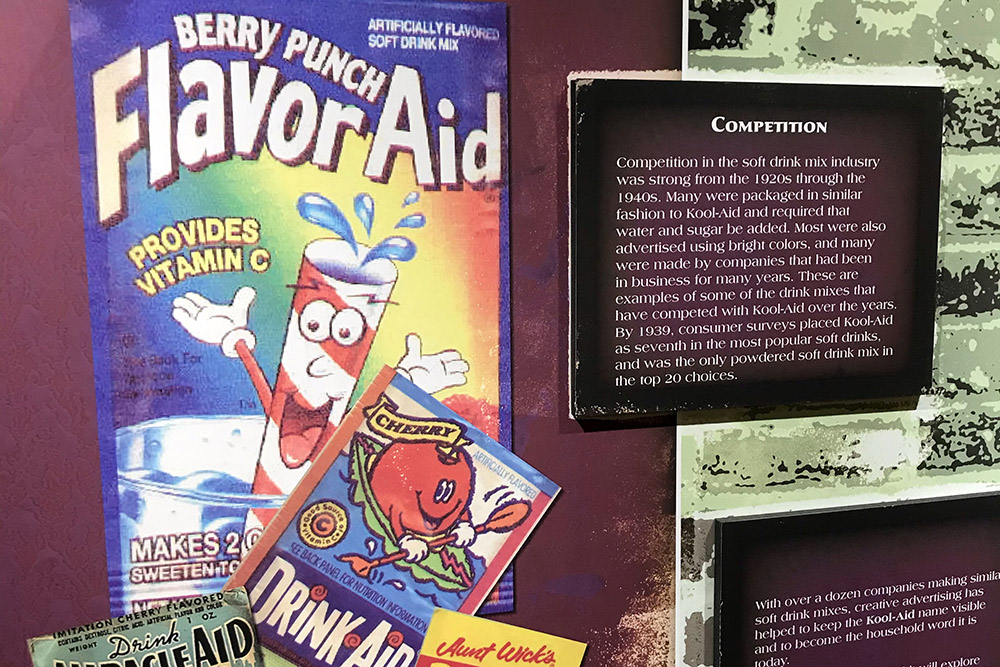 Though Kool-Aid isn’t manufactured here (it’s made by Kraft Heinz in Chicago), Hastings is where it all began. While living in Hastings in the early 1920s, Edwin Perkins and his wife Kitty ran a mail-order business selling everything from household cleaners to spices under the business name “Onor-Maid.”

Perkins was a consummate entrepreneur, always on the lookout for the next big business idea. One of his most popular early products was called “Nix-O-Tine,â€ a combination of herbs and a silver nitrate mouthwash that promised to help users kick their tobacco habits.

Another popular product was “Fruit Smack,â€ a concentrated liquid that customers combined with water and sugar to make a tasty drink. But Perkins initially sold the drink mix in glass bottles, which were cumbersome to ship and often cracked or leaked.

He attended the St. Louis Food Manufacturing Convention in 1926 and came home with a great idea: Why not convert the concentrated liquid into a powder?

He began selling this new “Kool-Adeâ€ powdered drink mix for 10 cents a packet in 1927. At the time, there were six flavors: raspberry, cherry, strawberry, grape, orange and lemon-lime. His newest creation was a hit, with grocers nationwide selling the packets of powdered flavor by 1929.

In fact, Kool-Ade became so popular that Perkins dropped all other Onor-Made products to focus solely on the drink mix. In 1931, Perkins moved the business to Chicago, which was a major hub for food manufacturing.

Though Kool-Ade (which became Kool-Aid in 1934) moved on, the residents of Hastings never forgot the origins of this refreshing drink.

In addition to checking out the museum exhibit or attending the festival (held every August), you can take a photo in front of the downtown building where Perkins first invented and manufactured Kool-Aid (it’s right around the corner from First Street Brewing) and see the Kool-Aid Man’s concrete Hollywood footprints in front of the museum. If you stop by the Adams County Convention and Visitors Bureau office, you’ll get a single-serving packet of Kool-Aid to take home.

Plus, the Kool-Aid Man has been known to make guest appearances at parties, reunions and other events around town, so keep your eyes peeled. You might just get to meet the big man himself!

“It’s a piece of our history,â€ says Nathan Hoeft. “You find little bits of it here and there all over town. Every once in a while, you’ll be walking around and see the Kool-Aid Man. It’s just a part of Hastings.”

Originally from Florida, Nathan Hoeft was living in Nashville when he met his now-wife Jessi, a central Nebraska native.

When the idea of moving to Hastings first came up, Nathan Hoeft admits he had a little bit of trepidation. But when they finally made the move to Nebraska in 2012, Nathan Hoeft immediately felt at home.

“Within a month of living here, I felt like I could breathe,â€ he said.

Nathan Hoeft, a programmer by trade, brewed beer at home as a hobby but hadn’t seriously considered opening a brewery until he moved to Hastings.

Now, he’s doing what he loves every day, surrounded by family, friends and a supportive community. He often rides his longboard the nine blocks from his home to work, another small-town perk he’s incredibly grateful for.

“I get to brew beer for a living and I get to ride a skateboard to work – I’m pretty sure 13-year-old Nathan is OK with this.”