From championship-caliber University of Nebraska at Kearney teams to top-notch facilities in place and in the works, it's fun to celebrate sports in Kearney. 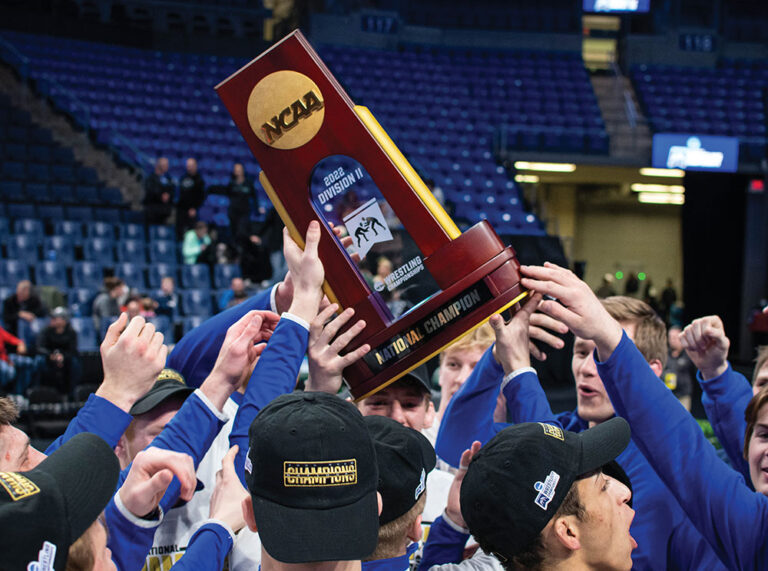 In the wide world of sports, it’s called building a winning team. That is exactly what Kearney is doing with the development of several new sports facilities designed to enhance the quality of life for residents and increase tourism through tournaments and the publicity they receive.

The highlight of these new playing grounds is a $34 million multisports facility under construction next to the Crowne Plaza Hotel and Younes Conference Center North. Once completed, this 210,000-square-foot complex will have 16 volleyball courts, eight basketball courts, four pickleball courts, a turf soccer field that can be divided into several smaller fields for other sports, and a three-lane walking/running track.

“If you can kick it, throw it, shoot it or pass it, you’re going to be able to do that in this new building,” says Roger Jasnoch, executive director of the Kearney Visitors Bureau. “The benefits are two-fold. Residents will be able to use the building for their recreation purposes and it will also increase our ability to host tournaments. We want to give people reasons to visit our community, and sports activities are one very sound way of doing that.”

The location of the complex – which was funded in part by a state sales turnback tax – is ideal for tourism. Not only will it be adjacent to the 172-room Crowne Plaza, but nearly a dozen other hotels are nearby. All told, the Kearney area has approximately 2,000 hotel rooms. Increasing the number of sports events in town will help keep those rooms filled.

“It’s going to make a big difference for us to be able to host more and even larger events in our community,” Jasnoch says. “We’re about 75% back to our pre-COVID tourism numbers and being able to host more tournaments and conventions will help us improve that.”

Kearney served up another big addition to the local sports scene with the opening earlier this year of a 62,000-square-foot indoor tennis complex, located at the University of Nebraska at Kearney.

The $8.8 million facility houses six courts, locker room space, an elevated mezzanine area for spectator seating, and offices for both UNK tennis and the Kearney Park and Recreation Department.

UNK head tennis coach Scott Shafer says he first heard talk about a new tennis facility not long after he arrived in Kearney 10 years ago. The complex became a reality through a combination of private investors and support from both the city and the university.

“We play at indoor venues around the country. A lot of them were built in the 1970s, and the viewing is basically nonexistent. You’re usually standing in a lobby area looking through plexiglass. This has an entire level designed specifically for viewing. It’s one of the best facilities in Division II tennis.”

“We just have such wonderful facilities in Kearney. It’s amazing how this community loves sports and creates opportunities for kids and adults to be active and participate.”

“Tennis is very popular here, and the community wanted more than what we had,” Shafer says. “What they built is amazing. They added all the things I want as a college coach to make it a great venue for us to train and for fans to watch.”

Others apparently agree, because it did not take long for the complex to land its first major tournament. UNK will host the 2023 and 2024 Intercollegiate Tennis Association NCAA Division II Women’s National Team Indoor Championships. The eight-team tournament will consist each year of the top-seven ranked Division II teams in the country, along with UNK.

“That’s going to be a great event for members of the local community who want to watch tennis,” Shafer says. “And the opportunity for us to host other tournaments in the future is absolutely available.”

In addition, Shafer says the complex will make it easier to attract recruits to campus, including members of the newly reinstated UNK men’s tennis team, which begins play in the fall of 2023. “This facility is new and shiny and exciting, and it’s going to be huge for recruiting,” Shafer says. “It’s going to let us have conversations with potential student-athletes that we weren’t having before.

UNK: Where the Lopers Play

The University of Nebraska at Kearney (UNK) makes it easy to root for the home team. Not only are the various sports within the UNK athletic department enjoying across-the-board success – highlighted last year by the wrestling team’s fourth NCAA Division II national championship and an individual national title in track – but the student-athletes have a strong connection with the Kearney community.

“It’s just a combination of a lot of different things,” says UNK Athletic Director Marc Bauer. “We have tremendous coaches and support from our administration and our community. And we have a family of young student-athletes who want to accomplish something in addition to their academics. It enriches their college experience.”

In turn, the student-athletes are enriching the athletic department’s trophy case. Along with wrestling and track, the UNK football, volleyball, soft ball and women’s basketball teams all qualified for postseason play last year, and the women’s cross country and golf teams won the Mid-America Intercollegiate Athletics Association conference championships.

Brooke Carlson, a fifth-year senior on this season’s women’s basketball team, credits all this success to the commitment and camaraderie that exists throughout the athletic department.

“They’re investing in the lives of the student-athletes, not just for our athletic ability,” says Carlson, who is majoring in math and physics. “They provide nutritionists, mental health counselors, a strength and conditioning program. It’s a very well-rounded approach. They invest to help us be the best people we can be, and that translates to our athletic performance.”

And then there is the community support. Carlson, a native of Omaha, says one of the reasons she chose to come to UNK is the close connection between the sports teams and the local fans.

“A lot of people in the community have gone to UNK or know somebody who has, and they’re very generous in giving back to our programs financially and by supporting us at our games,” Carlson says. “One of the aspects that drew me to Kearney is the community feel and support you get here.”

The teams return that support by volunteering throughout the community – from picking up trash to playing bingo with senior citizens – and by providing residents a source of entertainment.

“We log thousands and thousands of volunteer hours in all areas, especially nonprofits and the local schools,” Bauer says. “I think that helps attract people to the games to show support for their local team. We just have a great connection with our community.”